Canadiens vs New York Islanders recap: All they do is win

Coming off their OT loss against the Senators, the Canadiens were searching for a win, and they got it.

Share All sharing options for: Canadiens vs New York Islanders recap: All they do is win

After a disappointing overtime loss to Ottawa on Tuesday night, the Canadiens continued their homestand on Thursday against the New York Islanders. There would be no overtime on this night, as the Canadiens would eventually run away with the game in the third. 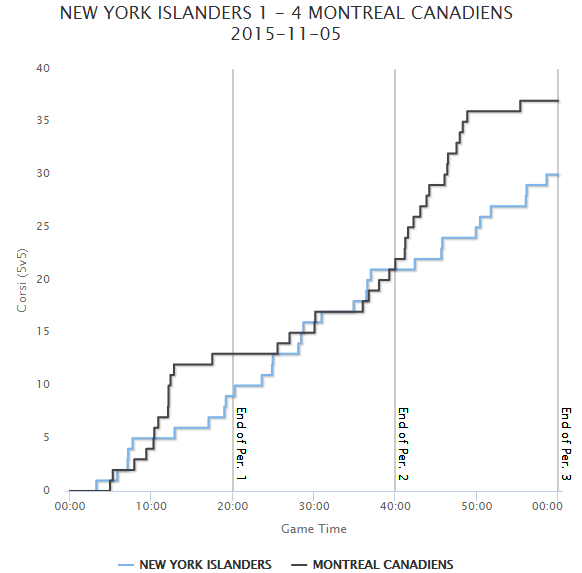 The first period was tightly checked by both squads, and while there were a few chances at either end, there wasn't a whole lot in the way of quality scoring chances. Mike Condon, and former Hab Jaroslav Halak were there when they were needed, but neither was overly tested throughout the frame.

A late Habs powerplay would put an end to all of that. P.K. Subban found Jeff Petry at the point with a nifty saucer pass, and the latter found none other than Dale Weise, who redirected in his eighth goal of the season. It has been an unreal start to the season for Weise, who took the team lead in goals with that tally, and one has to wonder when - and if - he'll come back down to earth.

Less than five minutes into the second, the Isles would tie it up. Kyle Okposo caught the Canadiens defense sleeping, cut untouched towards the high slot, and fired a quick shot through Mike Condon on the short side. It was a shot Condon probably stops more often than not, but it is hard to find fault in him with the way Okposo was allowed to walk into the zone.

Following the Okposo goal, the game returned right back to the tight-checking style of play reminiscent of most of the first period. That was of course until Tomas Fleischmann grabbed a puck that bounced off a linesman, walked in for a two-on-one with David Desharnais, and fed his pivot in the slot to put the Habs back on top 2-1.

That seemed to wake the Habs up, as Brendan Gallagher would get into the action very shortly after the Desharnais goal. Max Pacioretty may be struggling the last few games to put the puck in the net, but his shot found it's way to Gallagher's stick, and he finished the job by redirecting it past Halak to take a two goal lead.

Tomas Plekanec would add an insurance marker into an empty Islanders net, as the Canadiens rode a three goal third period straight to another two points.

There really isn't a whole lot to complain about with a game like this. The Canadiens played very well defensively, and although it took until the third to really take off, they were dangerous at the other end as well. For the most part, they dominated possession, and they didn't force Mike Condon to make too many ridiculous saves. And of course, when he was called upon, Magnum Mike was there.
It may not have been the most exciting game of all time, but sometimes the least exciting games are the best. Sure, people always want to have a little drama now and then, but if you're a big Habs fan, you can find some serious joy in an efficient win like the one they got last night. It really was a fantastic effort, and every Habs fan should be happy about it.
Next up will be the Bruins on Saturday night in Montreal, and if the Habs can put forth a similar effort, you have to like their chances.