The Habs have been eager to prove all season that they're more than Carey Price. With their world class goalie out with an injury, they took a step in the right direction in their 5-1 victory over the Winnipeg Jets.

After a pair of sloppy losses, and a rough victory over the Calgary Flames, the Habs needed to get back to their play from earlier in the year, against the high flying Winnipeg Jets. Without Carey Price. 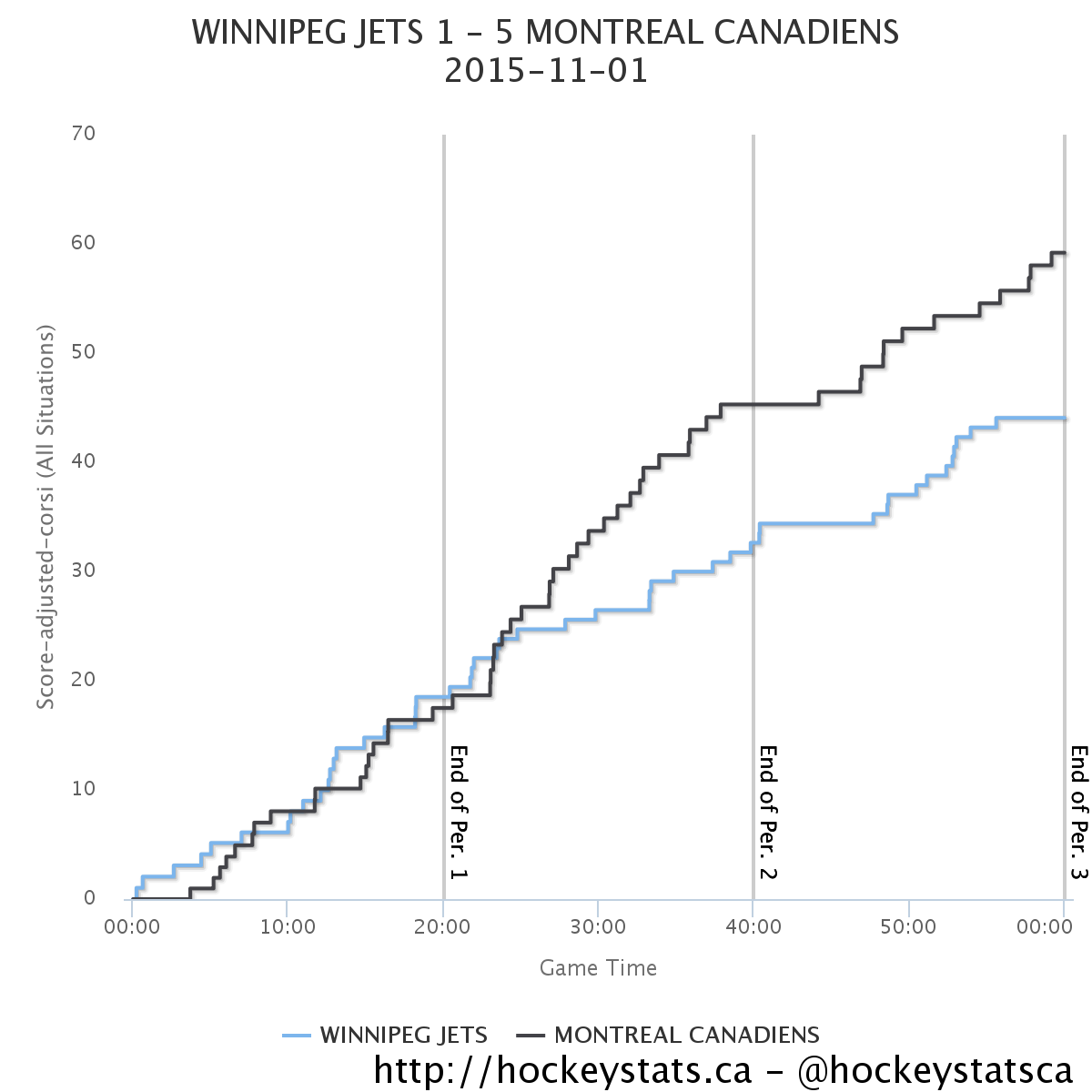 With Winnipeg coming into the second half of a back-to-back, and the Habs on their third game in four days, no one really knew which version of the Habs would turn up, the dominant team or the lucky one.

As it turned out, it was both, though it certainly didn't look that way in the first few minutes.

Barely more than 1:30 into the game, Tomas Fleischmann took a penalty against Jacob Trouba, but the Habs penalty-killers went to work with a will, making the Jets chase the puck repeatedly into their own zone, and allowing zero shots on goal. After that, it was fairly slow, sloppy-going, until Pacioretty took a high sticking penalty at the six-minute mark.

The penalty killers started strong, and only got better. Paul "Breakaway" Byron scored his second short-handed goal in as many games, before the Jets negated their powerplay with interference on P.K. Subban.

Against the Flames the Desharnais line got lucky, against the Jets, they were really good. In an incredible, power-forward move, Desharnais drove to the net, leaving a gorgeous rebound for Fleischmann, who put the Habs up 2-0 at the sixteen minute mark.

And then things got nasty. Torrey Mitchell was hit by Dustin Byfuglien and was missing from the Habs bench for quite some time, and then Byfuglien elbowed Brendan Gallagher, which led to a scrum. The hit will be reviewed by the NHL.

The second period opened with a bang and a flash as Fleischmann put away yet another beautiful play from Desharnais off the boards less than two minutes in, and Devante Smith-Pelly nearly sprang Galchenyuk for a breakaway.

Then scarcely 1:30 later, Dale Weise hammered one on goal, and Desharnais roofed the rebound, and that was it for Hutchinson. The Habs were up 4-0 and looking much more like the team that had won games 2-6 than they had in the past few games.

Things settled down a little, though the Habs continued to look good, Fleischmann having a chance at completing the hat-trick, and the Eller-Galchenyuk-Smith-Pelly line putting up quality shifts, before their hard work paid off, and Galchenyuk drew a penalty. Though the powerplay looked better than it has in the past, it was also stranger, as Mitchell and Byron got powerplay time, though Byron nearly had a goal. They had another crack on the man advantage on a trip on Beaulieu, and the Galchenyuk line finally got a chance at the powerplay.

Nikolaj Ehlers and his line got some good chances, but Condon was up to the task, as he was all night. There were some disturbing moments where the first line was stuck in their own end, though they nearly had a breakaway goal, and shortly after that Mitchell had a good chance.

Eller scored his fourth of the season on a physics defying redirect off his skate past Ondrej Pavelec. 5-0 Habs, the fans were olé-ing, and it was only the end of the second, shots 18-15, Habs. Score effects? What score effects?

Condon made a great stop against Byfuglien to open the period, and the Jets were much more aggressive throughout, though to no avail. The Desharnais line - backed by Emelin's pairing, no less - spent a very long shift hemming the Jets in their own end, and attempting to set up Fleischmann for the hat-trick, drawing a penalty at the six minute mark.

Unfortunately, the powerplay of old made its return, and Condon had to make several big saves before the Habs got their act together. But the third line continued to look very strong, and Desharnais' playmaking skills were on prominent display.

Then Nikolaj Ehlers, whose line looked dangerous all night, and Mark Scheifele ruined Condon's shutout bid as they set up Chris Thorburn straight off the bench, capitalizing on Tom Gilbert's miscue.

Fleischmann got his last chance at a hat-trick with 0:46 left in the game, and the Galchenyuk line kept the puck in the Jets' end for the last thirty seconds of the game to win 5-1, in what was their best outing in a while. They came out on top in shots, 26-19, and in possession, which had been terrible in previous games. Of course, it's impossible for the third line to continue scoring on almost half of their chances, but it is certainly welcome while it lasts.

In fact, if the Habs keep playing as they did tonight in front of Condon, they may just prove that they are more than Carey Price.