Canadiens vs Leafs Recap: The stars shine in the season opener

Canadiens win a close game against the Leafs in the opening night of the season.

Share All sharing options for: Canadiens vs Leafs Recap: The stars shine in the season opener

A new NHL season kicked off on Wednesday night with high hopes for the Montreal Canadiens. General manager Marc Bergevin made some moves in the off-season to add some scoring talent to the team, and coach Michel Therrien mentioned that the coaching staff made some adjustments to their fabled 'defensive system' to allow the game to open up a bit more with these new elements.

Clearly a plan was in place to bring some exciting hockey to Montreal. One of the key elements of this plan was to ensure that lines developed chemistry, and that consistency was seen all the way through the preseason and into the first game of the regular season.

Max Pacioretty scored the first goal of the season in the NHL in 2014-2015, and history repeated itself this year. Pacioretty received a long stretch pass from P.K. Subban to beat Bernier at 3:08 of the first period, with a high wrist shot, to make it 1-0 for Montreal.

Speaking of Pacioretty he was playing his 400th regular season game in the NHL and his first as team captain.  He became only the fourth Habs' captain in history to score in his first game as captain, following Hector "Toe" Blake (1940), Yvan Cournoyer (1975), and Vincent Damphousse (1996).

The game took a serious turn when Leo Komarov made a dangerous hit on P.K. Subban boarding him right in the numbers. Subban stayed down while Devante Smith-Pelly decided to have some words with Komarov. 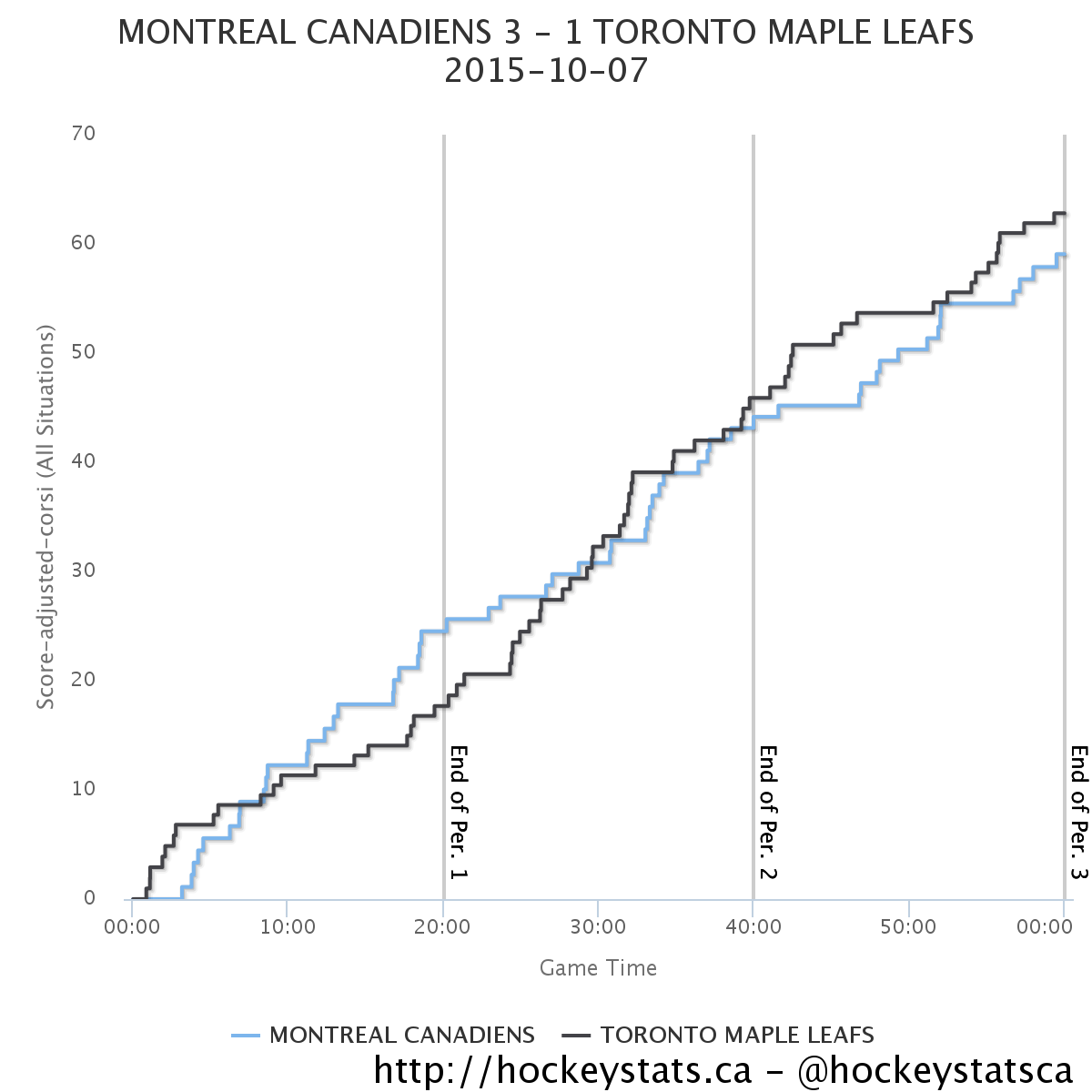 The scrum was brief, but the end result was both Komarov and Smith-Pelly getting two-minute penalties. Subban was slow to his feet, and took several spins during the following commercial breaks. He would stay in the game.

The first period ended with the shots 11-7 in favour of the Maple Leafs.

Gallagher started the second period off on the wrong foot by getting a goalie interference penalty for snowing the goaltender in the first minute. It was a questionable call, but we all know he will never get the benefit of the doubt in these situations.

The Leafs struck quickly on the ensuing powerplay when Kadri took a wild shot from the point that was headed wide, but happened to deflect off of James van Riemsdyk and past Carey Price, tying the game 1-1.

After a period of Toronto domination it looked as though Jeff Petry scored to put Montreal ahead, however the Leafs decided to use the new Coach's Challenge rule that allows the play to be reviewed at the potential cost of a timeout should the team lose its challenge. Upon review you could clearly see that Tomas Plekanec's stick came in incidental contact with Bernier's neck, and the goal was disallowed.

Lars Eller took a bad penalty behind the Montreal net, tripping Nazeem Kadri who outhustled him for the puck. This was Montreal's second bad penalty of the period, and old habits were floating back up to the surface rather quickly into the new season. The penalty killing units consisted of Plekanec/Pacioretty/Markov/Subban and Mitchell/Smith-Pelly/Emelin/Petry. The penalty was killed off successfully, and after a few brief flurries from both sides, nothing came of it, and the second period finished at 16 shots per team. The momentum seemed to be in Toronto's favour.

The teams came out strong in the third, but neither side could secure a sustained advantage.

David Desharnais' line of Dale Weise and Tomas Fleischmann had the best chance early on, when a scramble in front of the net allowed Desharnais a point blank shot into an empty net, but Jake Gardiner stretched out his skate and bailed out his goalie with a timely save.

Shortly thereafter, Alex Galchenyuk scored his first goal of the season with a loose puck on the rebound making it 2-1 Montreal with eight minutes left.

This was enough as the Habs managed to hold on against a very hard working Maple Leafs team, final score 3-1 after a Pacioretty empty net goal.

The Habs are back in action Saturday, when they'll be facing their long time rivals the Boston Bruins, at 7:00 PM EST.