Now that the 23-man roster has been finalized for the 2015-16 season, here's how the $71.4 million in salary cap funds have been distributed among the the players and how much is left for making in-season transactions.

Share All sharing options for: Visualizing the Canadiens' salary cap situation heading into the 2015-16 NHL season

The Montreal Canadiens have finalized their 23-man roster for opening night.

The most notable omission is  Zack Kassian, whose numbers come off the books while he is enrolled in the NHL/NHLPA's Substance Abuse and Behavioral Health Program.  His roster spot has been granted to the waiver-exempt Jacob de la Rose.  If Kassian returns to the lineup, the Canadiens will be responsible for a pro-ration of his $1.75 million cap hit.

Mike Condon has replaced Dustin Tokarski in the role of backup goaltender.  That move actually costs the Canadiens a small amount from a salary cap standpoint as Condon's 2015-16 league-minimum salary of $575 000 creates a slightly larger cap hit than the deal Tokarski entered into beginning at the start of last season, when the league-minimum salary he agreed to was $550 000.

With the current configuation. the Canadiens have approximately $3.6 million of salary cap funds remaining to make transactions throughout the year.  That unused amount would effectively be worth about $16.9 million at the NHL Trade Deadline that happens close to 40 days from the end of the regular season, or approximately March 1, 2016.  That would be enough, for example, to acquire Jonathan Toews and his league-high $10.5 million cap hit for the playoff run.

Tomas Fleischmann's recent $750 000 contract is one of the cheapest on the club.  He joins several members of the forward corps with a team-friendly deal, including top talents Brendan Gallagher and Max Pacioretty. In fact, seven forwards are signed for less than the buyout amount that will be paid to P.-A. Parenteau this season and next.

With the one-year contract, Fleischmann is set to become an unrestricted free agent at the end of the season, along with recent signee Alex Semin, Tom Gilbert, Dale Weise, and career Hab Tomas Plekanec.

The Canadiens will have more control of the expiring contracts of pending restricted free agents Jarred Tinordi and Devante Smith-Pelly.  Zack Kassian is set to become an RFA at season's end, as well.

P.K. Subban once again holds the largest cap hit on the team at $9 million.  Carey Price's $6.5 million comes in a number two.  While Jeff Petry's new contract begins with an average annual value (AAV) of $5.5 million, it's interesting to note that he, Price, and Subban will all earn $7 million in salary this particular season.

You can always find the latest salary cap visualization here, and it is listed in the Library section of EOTP's navigation bar. 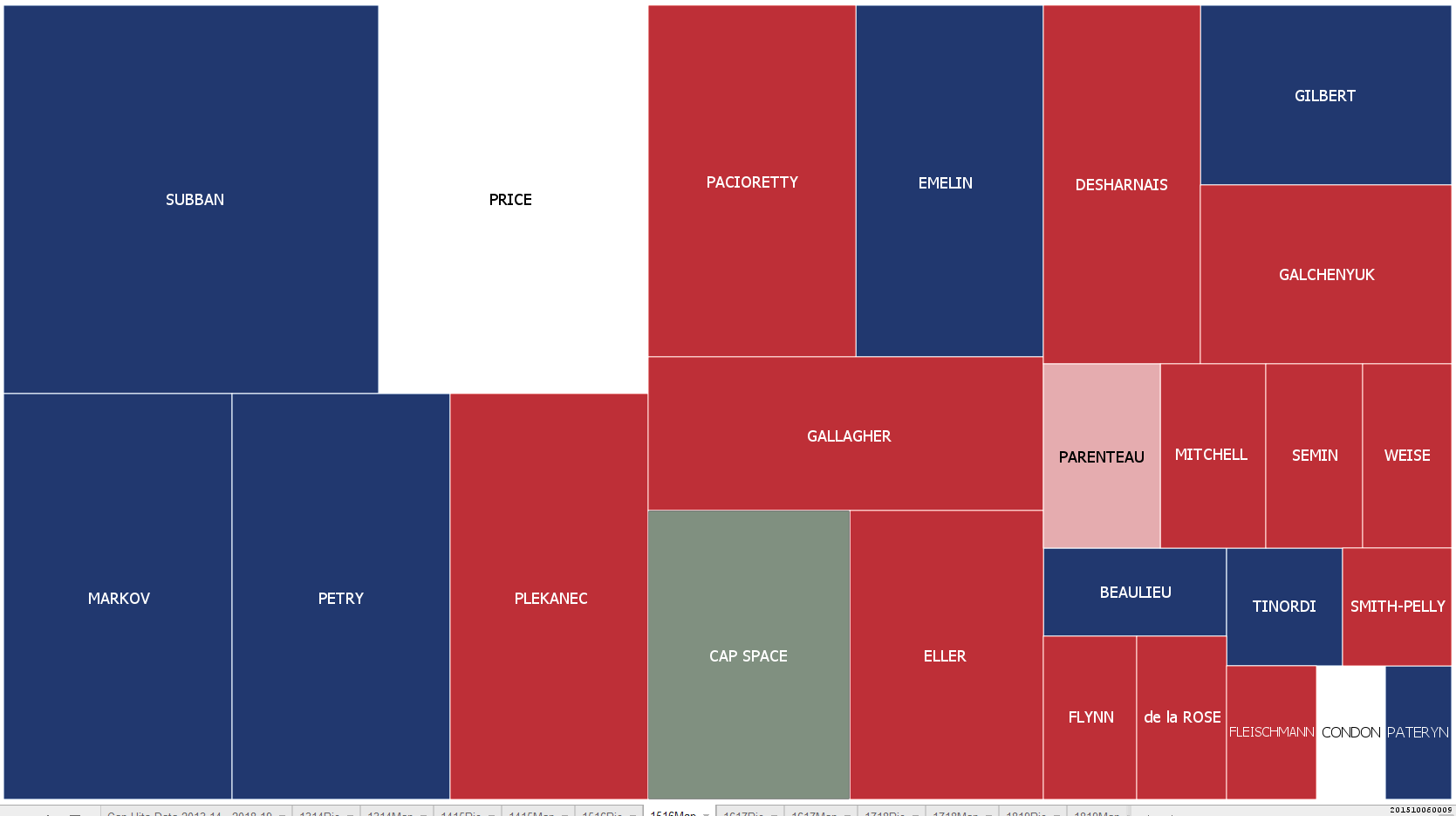 More information on contract details is available at:

A public Google spreadsheet containing this cap info and the charts these visualizations are based upon is available here.