The Habs flew into Calgary enduring a two-game losing streak, and walked out victorious thanks largely in part to the man they call Dutch Gretzky.

Share All sharing options for: Canadiens vs Flames recap: Dale Weise's hat trick seals the victory for the Habs

After an unprecedented start to the season for the Montreal Canadiens, two consecutive losses to the Canucks and Oilers respectively was a bit of a rude awakening. 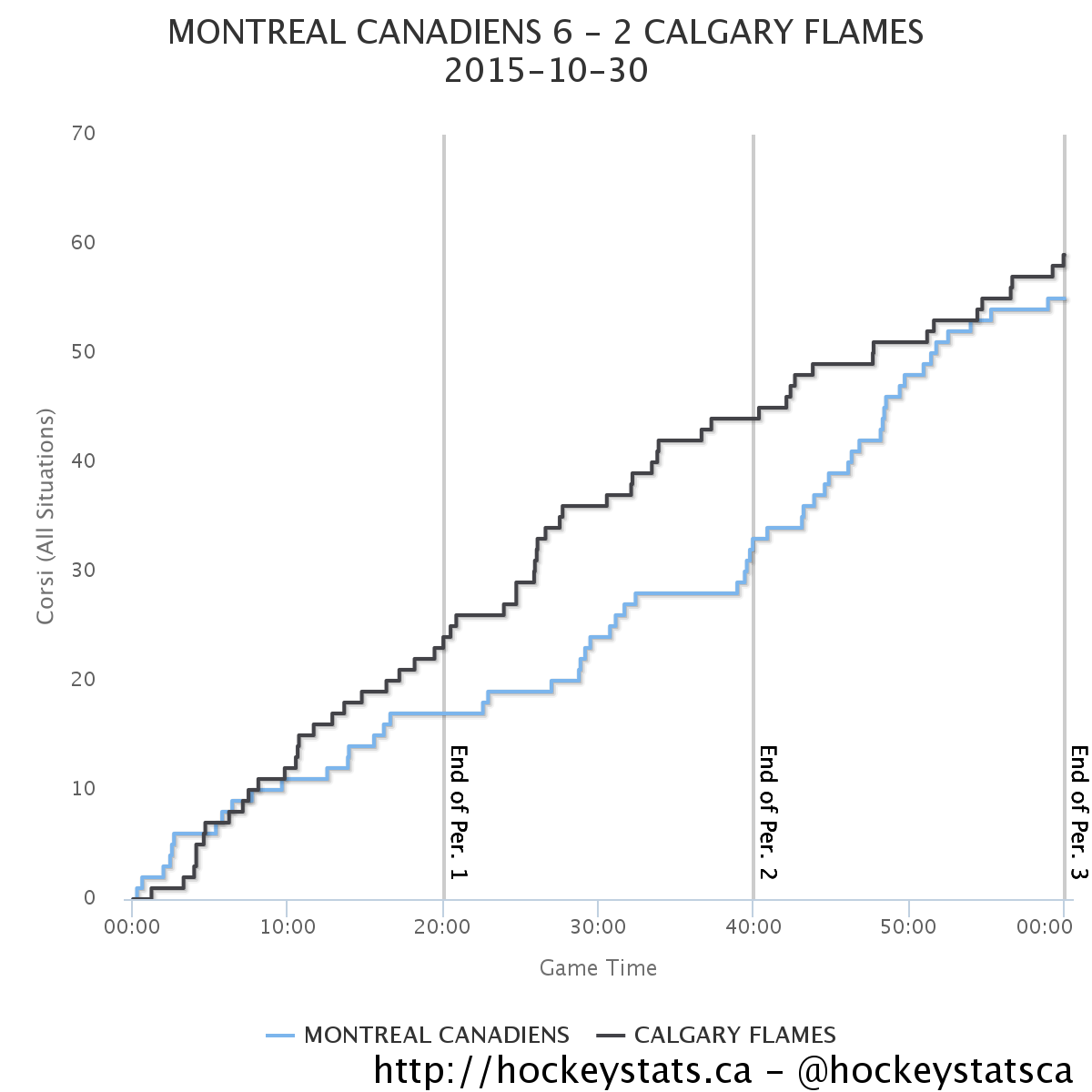 Having fallen back down to Earth, the Habs took to the ice at the Scotiabank Saddledome on Friday night to face-off against the Calgary Flames in the third of three straight games in western Canada.

Playing on the second night of a back-to-back, it was a risk that the Habs might come out looking a bit sluggish in the first period. That certainly was not the case early on, as aside from a few moments of panic around backup goalie Mike Condon, the Canadiens managed to control the flow of play in the opening minutes.

The team would be rewarded for their efforts just five minutes into the frame as Dale Weise ripped home his fourth of the season on a one-timer, courtesy of a nice feed from Tomas Fleischmann who went streaking up the wing.

The rest of the opening twenty didn't go quite so well. The Flames pressed hard after falling behind 1-0, and that was reflected in their shot numbers. The first period would end with Calgary leading 15-13 in shots on goal, and 24-17 in shot attempts. That advantage, though, couldn't help them crack Condon as the Habs took the lead into the break.

That would change as the second period opened, with Jiri Hudler tying the game a mere thirty seconds in, finding the back of the net with a sharp-angle shot in front of Condon.

The Habs would have the answer moments later after Johnny Gaudreau took a holding penalty, with Nathan Beaulieu rifling one into the net on the man-advantage to score his first goal of the season, restoring the Canadiens' lead.

A fast-paced second period would only continue on from there, as Josh Jooris potted Sam Bennett's rebound past Condon, evening things up once again.

That wasn't the end of the goal-trading, however, as a eventful second stanza only got wilder. Dale Weise would net his second of the game eight minutes into the period, finding a hole through which to beat Joni Ortio with a quick wrister from the slot, and giving the Habs a one-goal lead for the third time in the game.

The fun wouldn't stop there, as former Flames player Paul Byron sent a crisp pass across the ice to Devante Smith-Pelly who made no mistake burying the chance, extending the Habs lead to two.

That would do it for an exciting second period, in which the Habs continued to struggle at even strength despite pulling ahead on the scoreboard, being out-shot 11-7.

Lars Eller - who had been benched earlier in the game and played just 16 seconds in the second period - finally got some time on ice early in the third period before taking a slashing minor, sending the Flames to the power play. It would be the Habs, however, who took advantage, as Byron flew down the ice with a burst of speed to beat Mark Giordano and slid the puck past Ortio to give the Habs a 5-2 lead - drawing ole chants from the Saddledome crowd.

Things would go from bad to worse for the Flames as Weise struck again, completing his first career hat trick to raise the Canadiens' lead to four. Fleischmann, again, would draw the primary assist after a brilliant move to get free and a clever pass to Weise, who had no trouble placing the puck in the gaping net.

Weise's third of the night would stand as the game's final goal, giving the Habs their tenth win of the season and ending their brief losing skid.

It wasn't all roses for the Canadiens in this one as they were heavily out-chanced by the Flames, who just were not able to solve Condon very often. The rookie netminder came up big when he was needed, and improved his career record to 3-0-0. Stopping 30 shots on the evening, Condon's SV% now stands at .944, a glowing stat for the 25-year-old early on in the season.

Something that will be interesting to keep an eye on over the coming days will be the ice time of Eller who, as mentioned before, was benched for long stretches of this game. Barely hitting the ice in the second period, Eller's only shift of that period ended in a goal against which, in fairness, didn't have much of anything to do with Eller himself.

Undoubtedly, the Habs will want to see better performances in the future in terms of possession, as they've been stuck in a rut in that regard of late.

Tonight was no exception, as they had a sub-50 CF% showing against one of the league's worst clubs. Of course, a win is a win, and that's what the Habs achieved on Friday night on the strength of their secondary scoring.

The Canadiens will try to spark another win streak on Sunday as they return home to the Bell Centre to take on the Winnipeg Jets. Puck drop for that game is set for 7:00 PM EST.