It sounds completely absurd, but 80 years ago the Montreal Canadiens were nearly relocated to Ohio.

Share All sharing options for: The Montreal Canadiens almost relocated to Cleveland

The merits of relocating a given NHL franchise is a topic that tends to come up nearly every year. Whenever a team struggles with attendance, finances, or on-ice success, the discussion of their relocation can become an issue. Then there are those franchises like the Montreal Canadiens, viewed almost universally as untouchable. But as entrenched as the Canadiens now are in the fabric of the NHL, they are not without their own relocation controversy.

A move to Cleveland, or any other destination, may be unfathomable for the modern iteration of the Canadiens organization, but for a brief period in 1935 it was a possibility. The story actually runs surprisingly deep, the move to Cleveland representing, in truth, a small part of an eight-year period where the ownership, and thus the location of the Canadiens, was in question.

Noting the mid-30s date of this story, you would be correct to assume that financial difficulties would be part of the storyline. With the economy in shambles, it should come as no surprise that many professional sports teams were experiencing such difficulties, Montreal being no exception. Many have questioned the dedication owners Leo Dandurand and Joe Cattarinich had to their hockey team, but even that could have had much to do with the money situation.

It's unclear when exactly the ownership was officially for sale, but Dandurand and Cattarinich did turn down a $600,000 offer from an unidentified American syndicate in 1930. This actually had nothing to do with the Cleveland bid that people bring up nowadays. It is entirely possible that this group would have taken the team there, but all that can be certain is that they would have taken it somewhere in the United States. 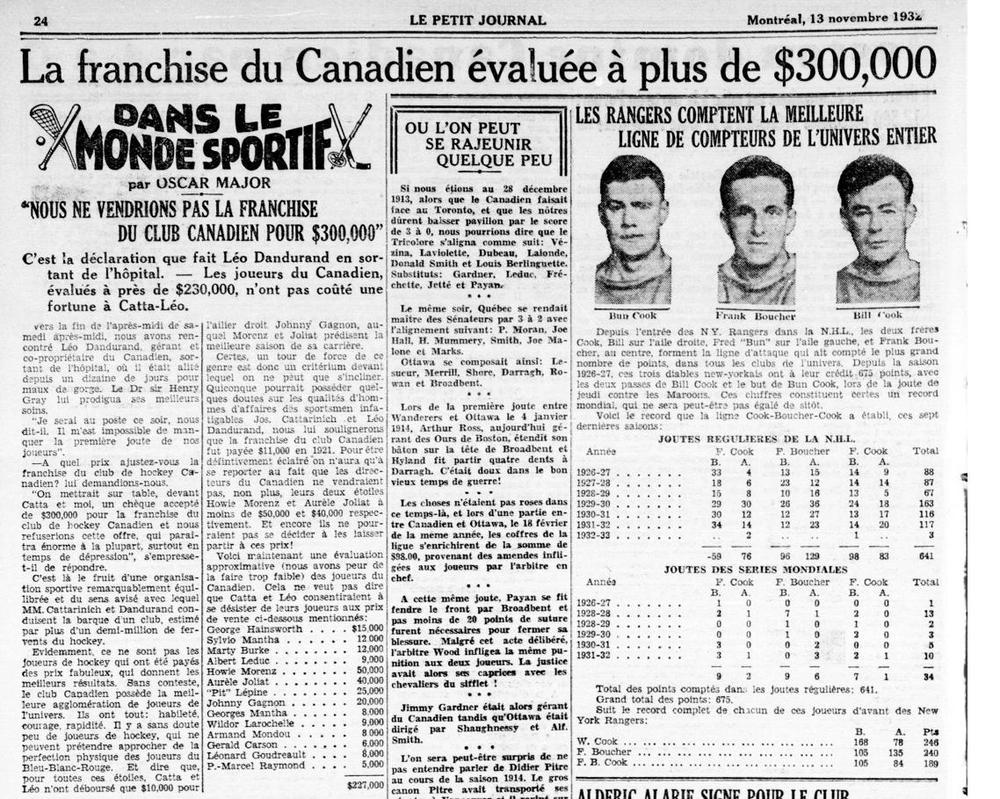 As the Great Depression dragged on, that price tag would drop at a fast rate. The article pictured above from 1932 references Dandurand claiming that especially in times of depression, they would never sell the team for $300,000. Two years after they refused a $600,000 offer, they were fielding questions about potential offers half the size, highlighting how bad things were getting financially.

This same piece from Le Petit Journal included a valuation of all the Canadiens' players at $227,000, and the suggestion that the club could sell off its player assets. When you start talking about the potential of liquidating assets, it reads as the beginning of the end for any organization, and for a time that looked to be the case for the Canadiens.

From the "WTF?" Department—I had no idea that the Montreal Canadiens discussed a move to Cleveland in 1935: pic.twitter.com/jxKA2vTvCN

Forget $600,000, or even $300,000, they would be offered a $200,000 bid from a Cleveland group, as was reported in the New York Herald Tribune article pictured above. I have not been able to ascertain who exactly was involved in this bid, or even confirm for certain that they would have moved the team to Cleveland. They were however intent on moving the team to the United States, and the consensus has always been that Cleveland would have been the destination.

Dandurand and Cattarinich would ultimately refuse the Cleveland offer. Financially, this likely wasn't the right decision, as that price would continue to drop. They eventually got to the point where they needed out quickly. The co-owners would eventually drop their price all the way to $165,000, as local businessmen Maurice Forget, Ernest Savard, and Louis Gelinas bought the Canadiens for that amount in September of 1935.

It would be discovered that these three businessmen were really a front for the Canadian Arena Company, owners of the Montreal Forum and the rival Montreal Maroons. The Canadiens came very close to moving, but were instead brought under the same banner as their city rivals.

Herein lies arguably the most important part of this story: two teams were sharing the Montreal Market, exacerbating the financial woes of the time. Cattarinich is quoted in the New York Herald Tribune piece as saying that Montreal was losing interest in professional hockey, and that the city could not support two teams. Once the sale was done, it looked like the Canadiens were to be folded, and the Maroons would stand as Montreal's team.

The CAC was feeling the economic pinch as much as any other organization, with the Forum and the Maroons both losing money as well. Simple logic dictated that they would only be able to continue the operation of two teams for so long, and one would have to go. Around the 1937-38 season they began looking to cut one of the teams out, and given that the Maroons won the 1935 Stanley Cup, they appeared to be the candidate for survival.

Enter none other than Toronto Maple Leafs owner, Conn Smythe, who led a movement within the NHL to veto the Canadian Arena Company's attempt to fold the Canadiens. He won over the league's government in his defense of what he felt was one of the most distinct franchises in the league, and the Maroons would eventually be the team to fold in 1938.

So they could have become the Cleveland Canadiens, or, worse, they could have gone away completely. When you consider that Maurice Richard didn't even play his first game with the Canadiens until 1942, that's when you realize how much this could have altered Habs history, and really, the history of the game itself.

H/T to @ToddRadom for providing the New York Herald Tribune excerpt via Twitter. And of course to former EOTP writer Robert L, who provided great background information with this piece, and also this piece.