The honey badger on skates known as Brendan Gallagher was relied heavily upon by the team, and by all accounts he provided the offensive spark that the team needed.

After an strong rookie campaign in 2012-13, Brendan Gallagher faced a bigger challenge going into his second season. Instead of succumbing to the notorious sophomore slump, Gallagher put together another solid year, finding his way onto Montreal's top line alongside Max Pacioretty and David Desharnais. He started the season with Lars Eller and Alex Galchenyuk, but Gallagher's real worth was seen when he was placed on the first line to jump-start their offense. Jump-start the offense he did, as Gallagher, Pacioretty and Desharnais would go on to have very good offensive seasons.

Not only was Gallagher's point production quite respectable (19 goals, 22 assists), but he also put up some very good possession stats, partially thanks to his zone assignments. Of course, playing on a line with Max Pacioretty has its benefits, but there's little evidence to suggest that Gallagher was not a major part of the first line's success.

He provided the offensive spark that Desharnais and Pacioretty needed direly, transforming what could have been a poor season for both veterans into decent campaigns. Not only did he earn his way onto the top line, but he clearly demonstrated the skills to stay there.

Gallagher maintained strong possession numbers all year, a remarkable feat for a second year player that was considered by many to be too small to succeed in the NHL. There were some injury concerns as the year went on, due to Gallagher being identified as one of Montreal's major offensive threats, however the Edmonton native not only weathered the physical storm, but instead thrived under the harsh playing conditions. 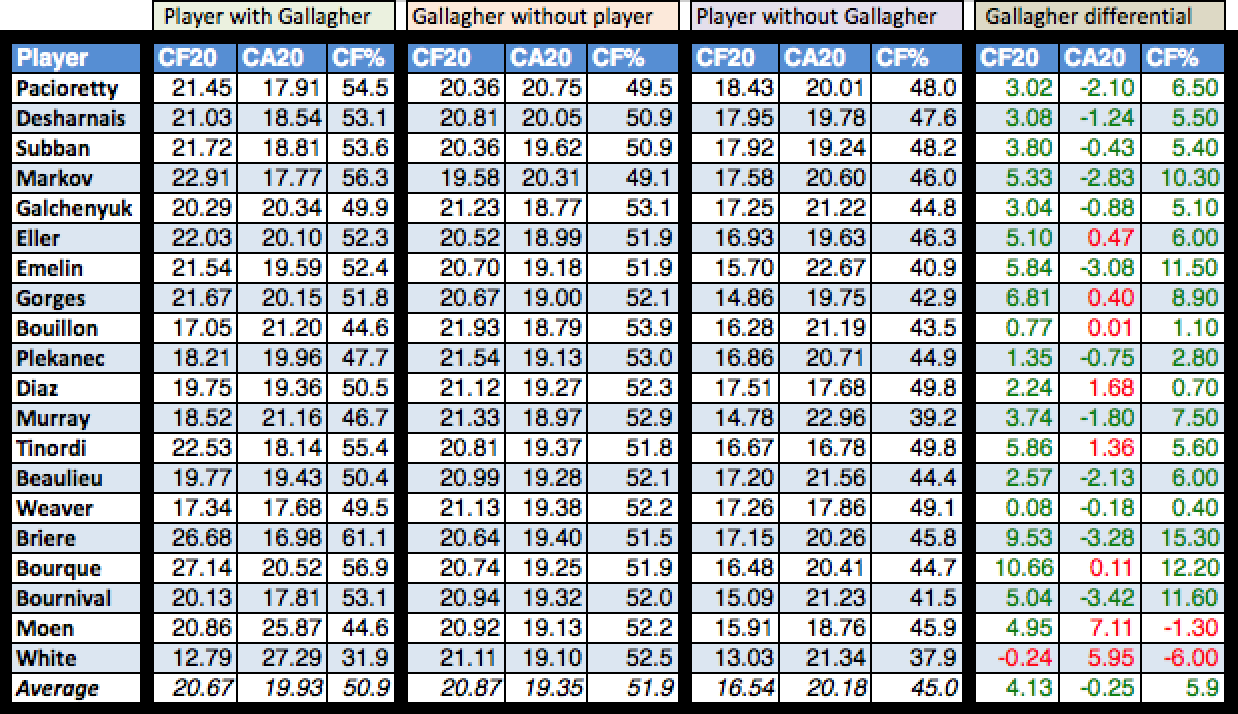 Gallagher's WOWY chart reads like beautiful prose by Voltaire. Other than Travis Moen and Ryan White, whom Gallagher spent very little time with, absolutely everyone on the team played better when paired with Gallagher. His true strength lies in how much offense is created when he's on the ice. Without certain players Gallagher managed to maintain his offensive attempt output, but when Gallagher was away from those same players they all saw a significant dip in offensive output.

Not only did the forwards play better whenever Gallagher was on the ice, but 5 of defenders that are expected to start the year with the Habs saw a notable drop in offensive attempts against whilst skating with Gallagher. This is likely due to the offensive pressure Gallagher produced, resulting in a great deal of offensive zone time. As we all know, when the puck is 200 feet away from your own net you don't allow many shots against. Gallagher certainly isn't a defensive stalwart, but his offensive game is so strong that everyone on the team benefits, including the defensemen.

There's no denying it, everything he touches turns to gold.