In many ways, Tomas Plekanec is the Habs' version of Atlas, as he holds up everything for the rest of the team to prosper, but as he gets older, is it time to share some of the responsibility?

There are two things that you can always expect from Tomas Plekanec; he will play your team's toughest minutes and be very successful at it, and he will score at a 20+ goal pace. There are a lot of fans and media in this town that don't really understand how valuable that is. Luckily before Extra Skater was taken down, I had taken a few notes of where Plekanec ranks among his peers over the last few seasons.

Of the 30 NHLers who played a similar percentage of their team's defensive zone starts, and faced similar levels of competition, not a single player was able to produce at the same level as Plekanec last season, or the three seasons prior. Plekanec's even strength production on it's own isn't that impressive, but in context, no current NHLer is ridden as hard as he is, and is able to produce at the same level.

While Patrice Bergeron gets a ton of deserved credit as an elite two-way forward, even he splits some of the tougher responsibility with other Bruins centers. No top center in the entire league has to deal with as much work in the defensive zone against top competition as Tomas Plekanec, yet he still gets his 20 goals essentially every year.

Plekanec was the beneficiary of some nice percentages last season, getting some of the best goaltending of anyone on the team, but his own production is starting to decline. As Arpon Basu said when he guested on Ice Level, it's very tempting for any coach to just throw a versatile player like Plekanec out there every chance you get, because he's never really going to hurt you, but that kind of attitude may be contributing to an early decline for Plekanec, and certainly tires him out over the course of the regular season.

While Plekanec was below even in possession almost the entirety of last season, he outperformed his zone starts by a pretty staggering margin. At a certain point that's too be expected once your defensive zone starts get so high that it's nearly impossible to be outplayed by the same margin, but you have to wonder what a player like Plekanec could do if his minutes were a little easier.

This upcoming season should see Manny Malhotra take a chunk of Plekanec's defensive starts, and Lars Eller should be ready to face a bit more of the top competition, so we should see a better season from the wise, old Czech. It doesn't look to my eye that Plekanec's hands have gone, nor has his speed tapered off. Eventually he should slide down into the third line center role, but for now as long as his minutes are a bit easier, he may still be the Canadiens' best center overall. 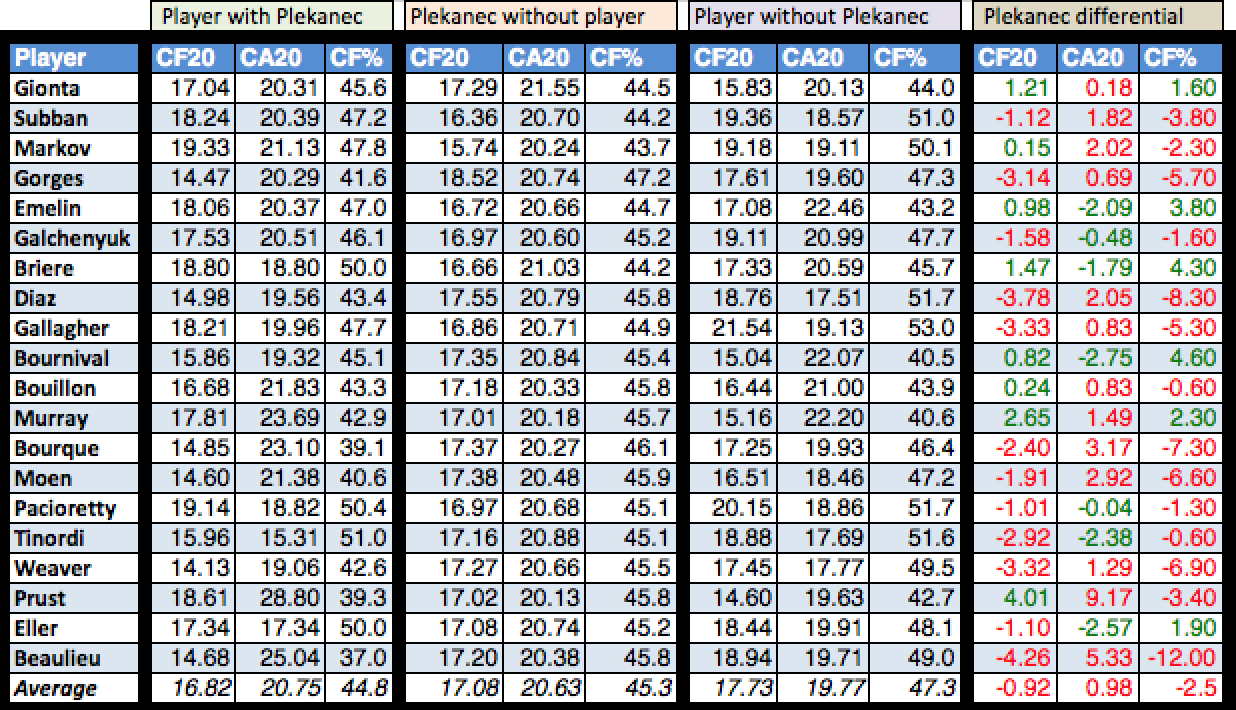 One thing to keep in mind when looking at WOWY statistics with Plekanec, is that it's a safe assumption to say when players were with him, they were playing the toughest minutes they would play. Naturally most players would be more successful on a line with another center then, so it makes sense to see a lot of red here. With that said, the difference isn't that large on average, and curiously some players still excelled with Plekanec.

What may be most surprising is that both Douglas Murray and Alexei Emelin, the two defensemen who struggled most last season, were better off with Plekanec than without him. The only thing that I can think of to explain this weird little fact, is that perhaps Plekanec was very aware of their problems with the puck, and played further back in the defensive zone to compensate for it while they were on, something other centers on the team failed to do.