Tweets from the Mayor, offensive zone starts and Max Pacioretty: The continuing story of David Desharnais.

There are three things guaranteed in Montreal. Bad roads, taxes, and controversy surrounding their diminutive center named David Desharnais. As long as Desharnais will be paired endlessly with Max Pacioretty, his offensive numbers will always be near the top of the Habs. This, combined with cushy zone starts, usually leaves Desharnais with some of the most comfortable minutes on the team.

There are arguments on both sides of the coin that make sense. For all intents and purposes, Max Pacioretty does produce a lot of goals alongside Desharnais, although when delving a little further into the subject it's quite apparent that neither of them have spent much time apart. Andrew opined that the two are not inseparable, but for the foreseeable future, the two will remain on Montreal's defacto top line, shouldering the main offensive load of the team. Until Alex Galchenyuk is ready to take over first line center duties, David Desharnais will continue to benefit from easy minutes and strong line mates.

After a terrible start to the season that saw him produce only one assist in 19 games, it's only fair to say that Desharnais did manage to turn his season around after a couple press box assignments by coach Michel Therrien.  In the final 60 games of the season, the 5'6" center created an impressive 51 points.

There's a very good reason Desharnais struggled to start the year, he wasn't given rookie-like protection in his zone assignments. Once his zone starts returned to a cushy level, Desharnais generally produced better than average possession numbers.

It's safe to say that the Habs will have to continue to deploy Desharnais in a sheltered role if they hope to see any results, and given that his contract runs until 2016, odds are he'll count on Tomas Plekanec to continue to absorb the tough center man minutes, whilst Desharnais coasts on powerplay minutes and offensive zone starts. 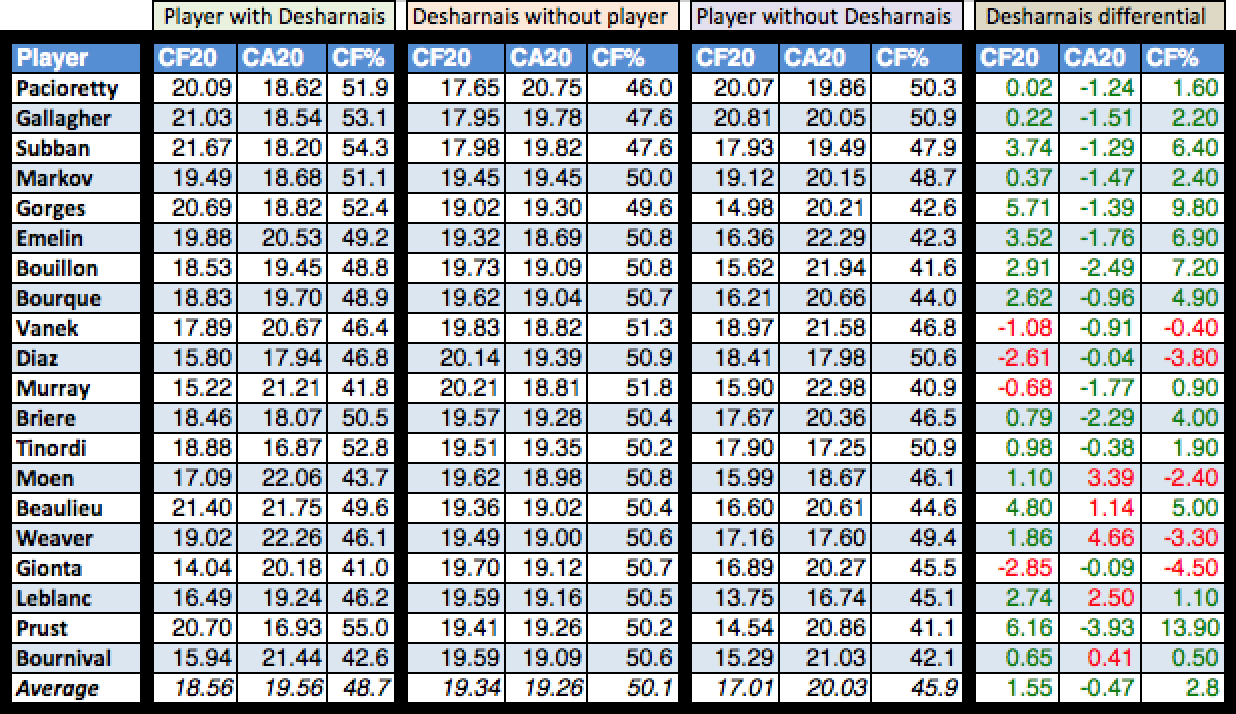 The key part  we should inspect on what seems like a great WOWY chart, is Desharnais' effect on both Max Pacioretty and Brendan Gallagher, both of whom spent the most time on Desharnais' line.  The positive effect on Max Pacioretty's offensive numbers are negligible, although there is a noticeable reduction in shot attempts against when all three are on the ice. What stands out, is Desharnais'  resulting numbers away from both Gallagher and Pacioretty, in that they're significantly worse.

This deserves a little more digging, although the quick conclusion is that Desharnais relies heavily on his line mates to produce. Unfortunately, he struggled when paired with any other wingers, resulting in the on-going fiasco that we've endured ever since he made the team.

In the mean time, we can continue to expect honest, yet sheltered production from undrafted forward, who despite an easy workload has proven time and again that he is capable of hitting the score sheet at the NHL level, and that has value.