The rookie phenom of the lockout shortened 2012-13 season struggled pretty mightily to produce last season, but did he improve in other areas?

Suffering multiple injuries last year, keeping him out of a combined 29 games in the regular season and playoffs, it's no wonder that Alex Galchenyuk struggled to produce in 2013-14, comparatively to his rookie season anyway. Like Eller, Galchenyuk was horribly unlucky in regards to the success of his teammates while he was on the ice, even if his personal contribution was very good.

While Galchenyuk was outscored quite severely at even strength, there are a lot of good signs in his first full length NHL season. At just 19, Galchenyuk was exposed to much tougher competition and zone starts than he was as a rookie, and though his raw numbers may look disappointing, his possession numbers were still among the best on the team, especially while the score was close, and his production per minute was still reasonable when you factor in the horrid shooting luck of his teammates.

Galchenyuk was also extremely effective at something we're going to be focusing on a bit more this year; penalty differential. For a young player to have a positive differential while they don't get the benefit of the doubt of refs is very impressive. Galchenyuk may end up being a penalty drawing machine along with being a solid possession driver and big time scorer.

As the season went on, Galchenyuk was given more and more responsibility, eventually shifting from a third line winger role to facing the top level competition with Tomas Plekanec. While Galchenyuk struggled pretty severely upon returning from his broken hand, it was for a very short time, and he didn't have much trouble outperforming his zone starts.

Galchenyuk's zonal deployment never got too tough for a significant amount of time, but he wasn't used in nearly as much of an exploitation role as he was in his rookie season, as the development path to ease him into tougher minutes seems to be on track. Don't be surprised if next season he sticks on Plekanec's wing in the toughest minutes all year. 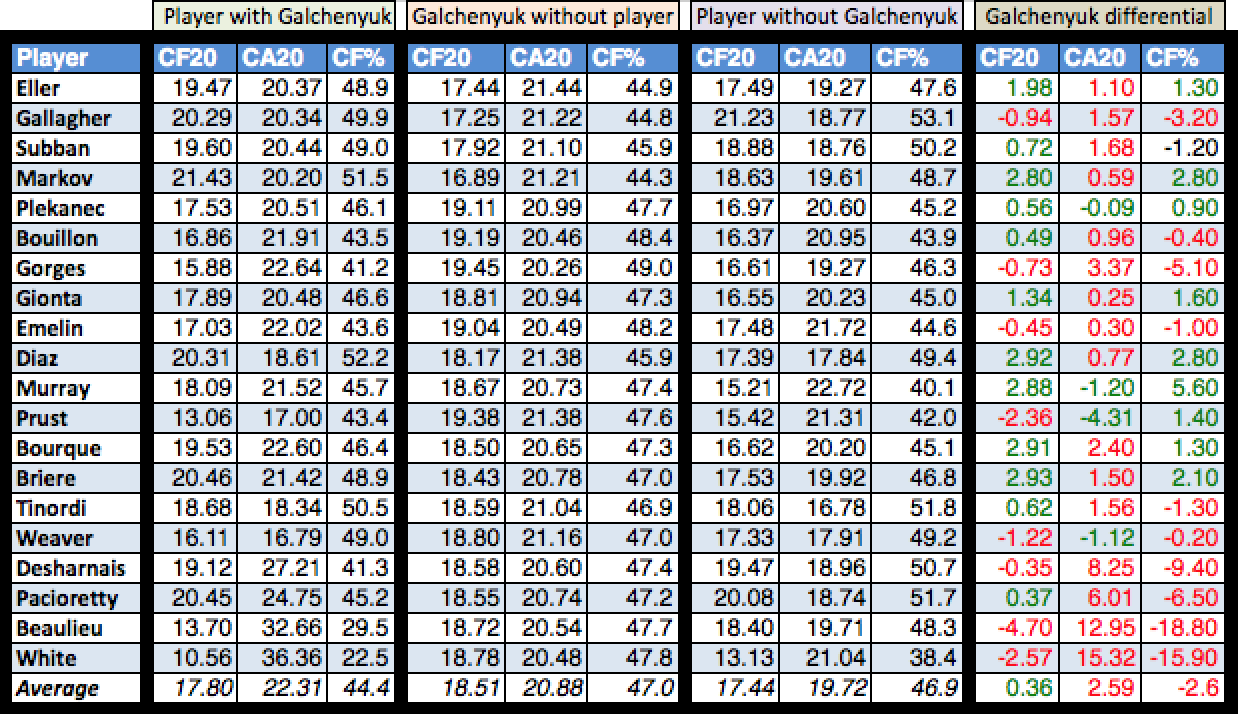 This is one of those situations where the final average difference doesn't make a lot of sense. Galchenyuk only played between 15 and 20 minutes with Desharnais, Pacioretty, Beaulieu, and White, yet they were so gravely worse in those few shifts that his average is dragged right into the gutter. If we stop the sample at Mike Weaver, Galchenyuk actually had a positive impact on his teammates, a +0.5% positive impact, to be exact. That's essentially being possession neutral, but at his age that's not too shabby.

What is noticeable from that breakdown is that Galchenyuk was a big positive on his teammates offensively, but a fairly heavy drag on them defensively. That matches up pretty well with the eye test, as he hasn't yet developed his defensive game on the wing. Sometimes Galchenyuk gets caught playing center in the defensive zone, which doesn't really work when you're already the center. You have to wonder if maybe he'd be better off just learning to be an NHL center and taking the knocks instead of breaking in on the wing. Then again, it worked fine for Seguin.