I think everyone would agree that Lars Eller did not have a good season in 2013-14. His production was nowhere near where it should have been, and on the defensive side of the puck, he was on for far more goals than a player of his calibre should be. With that said, there are a few things about this breakdown that I want to pay particular attention to.

These factors are important when evaluating Eller's season. Eller put up the raw performance to justify a very good season, but his results were a complete disaster. It doesn't make much sense.

Again, Eller was above the team's average performance in fairly tough minutes for most of the season. His second half of the season is even more impressive, as his minutes got continually more difficult, yet he wasn't scoring. Obviously some of the lack of goal scoring while Eller was on is his fault. There are minutia in hockey that aren't counted in the statistics we currently have available, and surely the frustration of playing well in the long run and not getting results hurt him in rushing plays or making bad decisions.

However the immediate turnaround in Eller's season when it came to production was the transition from having a guy like Brandon Prust on his wing, to Brian Gionta. A defensively responsible winger who could score was what Eller needed to dig himself out of the gutter. 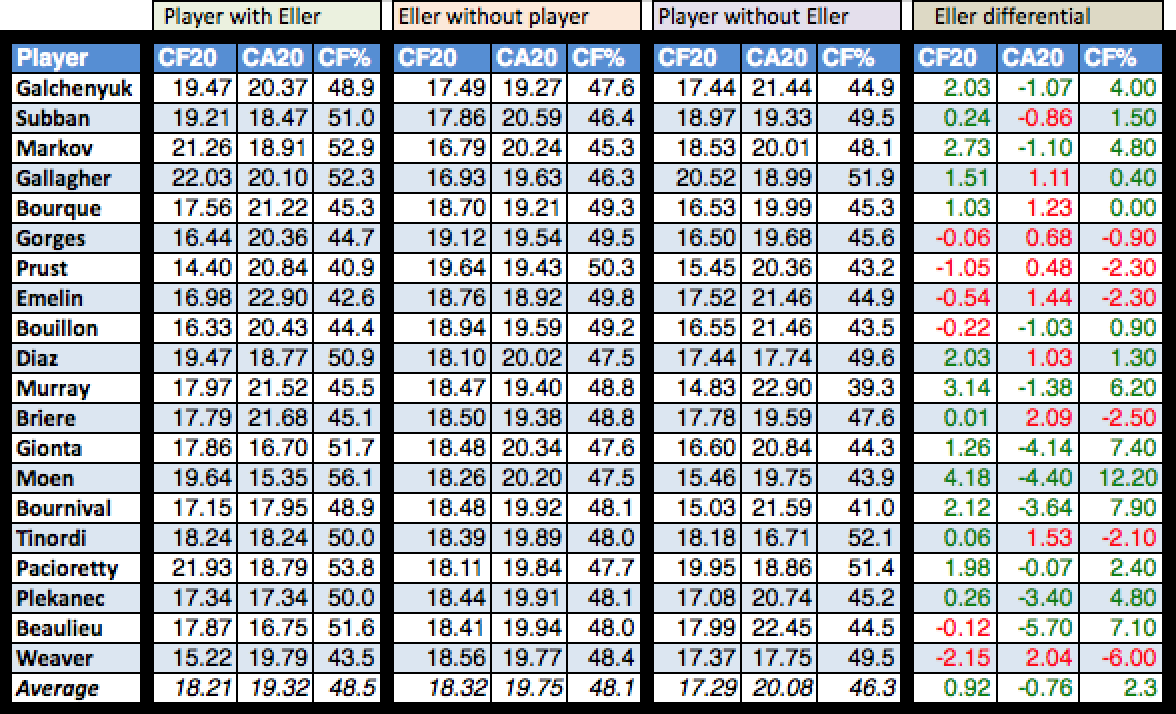 One of the main excuses for Eller last season was that Rene Bourque dragged him down, and looking at the different teammates he played with, this is definitely true, but I don't think it was the main problem. Eller made almost all of his teammates significantly better, which is especially impressive since most of them were not playing easier minutes with him than without him, but something you can't see in this chart is fairly illuminating.

Eller's most common linemate last season was Alex Galchenyuk, and the two played just 45% of Eller's ice time together. After him, Eller's most common linemates were Brendan Gallagher at 28.6%, Rene Bourque at 27.6%, and Brandon Prust at 23.8%. And it's not like those players played all their time with Eller in one big chunk each, he was constantly bounced around without much of a chance to build anything.

In the end Eller has to take responsibility for his own lack of production, but with the way he played last season, his results just don't add up. Often times we caution when players have seasons that are beyond their abilities that we should expect them to regress downwards and not to expect much, but with Eller, expect so much better, and he'll deliver.