As the Canadiens complete their first week of 2014-15, can they keep their undefeated record intact against the Capitals?

Share All sharing options for: Canadiens vs Capitals game preview

The Montreal Canadiens, as they seem to be perceived by the NHL community, are in an interesting spot. Some place the Habs on the same level as teams like the Bruins and Lightning, fighting for a division championship and an easier path to the second round. Others place Les Glorieux one tier down, a likely wild-card team but not a true competitor. Well, if preseason efforts are worth anything, the Habs may be starting to engender some optimism.

The Canadiens made it three for three on Friday night, taking down a pretty convincing facsimile of the Colorado Avalanche's NHL lineup. Now, they'll try to do the same against the Washington Capitals, who will also ice a near-complete lineup. Prized free agent signing Matt Niskanen is absent, but most of the Capitals big guns are present. The Habs will also get a chance to see impressive prospect Andre Burakovsky in action, as Washington will join Montreal in icing a few talented young bodies as their lineup begins to take shape.

Dale Weise and Lars Eller draw in, but the player with the most to gain or lose might be Christian Thomas. In an uphill battle for the last available spot in the big leagues, the Son of Stumpy will have to clear a bar set pretty high by Jiri Sekac. With only three preseason games left after tonight, time is running out. 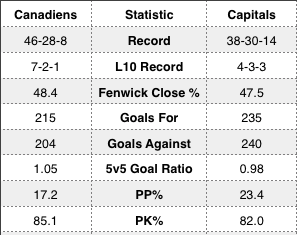 The Washington Capitals have and Montreal Canadiens have something of a special relationship, in the sense that a certain 2010 playoff series propelled the Habs to their greatest playoff achievement in years (a feat they've since matched), while the Capitals were sent into a franchise-altering tailspin.

Bruce Boudreau's high octane Caps were dynamic and dangerous, but when Jaroslav Halak near singlehandedly shut down Ovechkin and his crew, Capitals management went into Buffalo Sabres-style overreaction mode. Boudreau was sent packing, and remained unemployed for about five minutes. Alexander Semin, one of the NHL's most dangerous wingers, was sent packing due to his faint of heart reputation. Meanwhile, Boudreau replacement Dale Hunter instituted a system that was near the polar opposite of his predecessors, and ill-suited to the talents of his roster. In one fell swoop, one playoff series loss to an inferior team took an Eastern powerhouse and made it into a playoff bubble team.

Bubble team is where the Capitals remain, though they've spent some money to try and change that. George McPhee, architect of the above-mentioned confusion, has been shown the door, only to be replaced by his right-hand man. That man, Brian MacLellan, proceeded to borrow from the model of the notoriously staunch Pittsburgh Penguins, spending big money on 2013-14 revelation Matt Niskanen and shutdown guy Brooks Orpik, who appears to be a more expensive sort of version of Douglas Murray.

The most important element of the Capitals puzzle might be Barry Trotz. There may be no team in the NHL in greater need of a firm hand on the wheel to properly manage their talent. Tonight may give us our first glimpse of whether or not Trotz is the man for the job.

The last Canadiens-Capitals game was, in a word, forgettable. Alex Ovechkin's goal two minutes into the second was enough to secure the victory, but the Capitals piled on four more for good measure and sent the Canadiens spiralling into their fourth straight loss with a 5-0 shutout loss.

Of course, all of this doesn't mean we can't get some masochistic enjoyment out of the highlights! P.K. Subban does some neat stuff, like using some agility to earn a shot from the point, or trying to play 2-on-2 against Nick Backstrom and Alex Ovechkin with a hollow old tree for a partner. You can also enjoy Ovi showing some ridiculous skill at the side of the Habs' net, and the Caps fourth line picking apart the Canadiens defence with cross-ice passes. Not pictured: Brandon Prust losing his mind after goal #4 and being asked to leave.

As for goal-setting, anywhere between maintaining their preseason dominance and the effort depicted above would be fine.