After earning a victory on the strength of their veteran talent, can the Canadiens keep up their momentum as they head to Quebec City?

Share All sharing options for: Canadiens vs Avalanche game preview

Two down, six to go.

After their youngsters found a way to hang tough and earn a preseason-opening victory versus the Bruins, Thursday night's clash with the Avalanche was highlighted by some impressive displays by the Canadiens' top talent.

Max Pacioretty scored with a laser of a wrist shot that could have been any of his 39 goals last year. P.K. Subban teed up one of his fusion-powered slapshots, and showed that he's one of few men that can go toe-to-toe with a rushing Nathan MacKinnon and not blink. Perhaps most impressively, Alex Galchenyuk reached into his toolbox and found his wrist shot, a weapon that he needs to deploy way more often.

Reassured that the team's top players are working on a business as usual basis, tonight's game should be about the up-and-comers. Christian Thomas, should he get another chance to play, will look to cement his reputation as a leading candidate for a job with the Habs to start the season. Similarly, a player like Jarred Tinordi will look to prove that his first preseason effort of 2014-15 was an aberration.

In a less than intimidating Eastern Conference, the Habs have the foundation that will allow them to assert themselves as contenders. Tonight, the Habs will hope that the structure around those building blocks will continue to show strength as well. 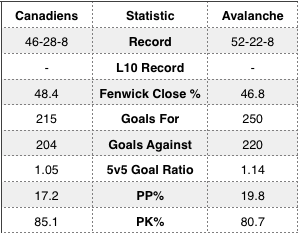 In the same way that last night's affair confirmed a lot of what we already knew about the Habs, it did the same for the Avalanche. The top of Patrick Roy's lineup is fantastically talented, and goals by Gabriel Landeskog and Tyson Barrie showed how effortlessly the Avalanche can strike. The biggest part of the Canadiens' shot advantage was their six powerplays, as the Avs and Habs played close to a draw at evens.

The lack of depth at the bottom of the roster was a big part of the Avs ultimate downfall. The list of penalized Avalanche players, except for Matt Duchene, read like a who's who of soon to be AHLers and Denver-based scrubs. Max Talbot's primary contribution to the game was an ill-timed and dangerous shove of Alexei Emelin in the dying seconds of the third period, while Nate Guenin's most memorable play was a penalty killing effort in which Max Pacioretty played keep-away from him, displaying an effort befitting of #67's nickname.

Many have posited that the Avalanche are poised for a tumble from the lofty perch they set for themselves last season. If that becomes reality, a weak bottom of the roster will be one of the big reasons why.

Last time out was less than 24 hours ago and 250 kilometres away, which is hopefully close enough to carry over many of the good things the Habs did last night. They drew numerous penalties, and their powerplay often looked dangerous.

Errors were made too, however, and tonight should be able fixing them. A defensive zone coverage breakdown cost the Habs their second goal against, and focus on positional play should be at the forefront of tonight's agenda. Success in that regard will help the Habs check off other items on their to-do list, such as zone exits.

With a carousel of characters occupying the roster, and the most vanilla of tactics and player management systems at play, it's difficult to argue that preseason success translates directly to success in the regular season. It does, however, give a team the chance to learn, to gel, and to invest in the skills and concepts that transcend personnel and coaching. With a mere nine days until the curtain rises, it would behoove Michel Therrien to ensure that such an investment is secured.