Share All sharing options for: Canadiens vs Bruins game preview

It took the Montreal Canadiens 106 games, pre-season, regular season, and playoffs alike, to finally meet their end last year. As 2014-15 begins to come into focus, the Canadiens are aiming to play at least the same number.

It will be a younger, faster, Canadiens team that takes to the Bell Centre Ice for the first time tonight. No more Brian Gionta, two-way ability lost for better or for worse. No more Josh Gorges, spurned in favour cheaper, and better talent. No more Douglas Murray, and please, oh please, no more Francis Bouillon.

Brendan Gallagher and Alex Galchenyuk are a year older. P.K. Subban and Max Pacioretty, established as top players in both their franchise and league, will look to further assert themselves. The veteran elite, Andrei Markov and Tomas Plekanec, remain as steadfast as ever. Best of all, for at least four games or so, the future talent so thoroughly discussed through August and September will be on full display on NHL ice.

We're two weeks away from hockey, folks. It's the most wonderful time of the year. 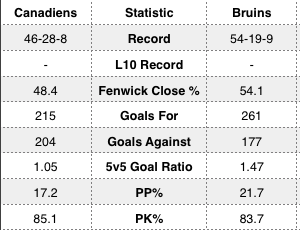 As their impeccable 2013-14 stats illustrate, the Bruins are a powerhouse team, and are likely to again be the Canadiens primary obstacle to winning the division. The Bruins have an excellent core of top players at each position, most notably Patrice Bergeron, Zdeno Chara, and Tuukka Rask.

However, this was something of a challenging off-season in Boston, as the team's salary cap hierarchy began to implode. The first casualty was David Krejci's 30-goal bookend, Jarome Iginla, whose new  contract with the Colorado Avalanche far outstrips what the Bruins could reasonably have paid him. The Bruins seem prepared to the replace the veteran Albertan on their second line with a player like Loui Eriksson, who struggled in his Beantown debut last season. Eriksson moving up the lineup implies that a young player, like a Jordan Caron or Ryan Spooner, or potentially even 2014 first rounder David Pastrnak, may have a change to stick with the big club.

The greater concern for the Bruins, however, is the training camp absence of Reilly Smith and Torey Krug. With the Bs almost $1 million over the cap ceiling, their two most promising young roster players remain unsigned RFAs as of this writing. Neither player has taken part in camp and pre-camp activities, and it seems as though some creative accounting and roster juggling will be required to accommodate them. Marc Savard's projected move to the LTIR will bring relief in the $4 million range, but it looks like a roster player (often rumoured this summer to be Brad Marchand, or Johnny Boychuk) will have to move to make funding available.

Of course, the Canadiens were in something of a similar predicament not two seasons ago, when an off-ice situation kept P.K. Subban out of camp and even derailed his first six games of the season. The Canadiens would go on to make the playoffs, and Subban to win the Norris trophy, so clearly, even a less than optimal contract scenario like Boston's can be overcome without much residual impact on team or player. All logic dictates that the Boston Bruins are going to make the playoffs this season, and they're exceedingly likely to do so with Smith and Krug in roles similar to those they played last year. The bigger question is how soon Krug and Smith can assume those roles, and who has to move to make that happen.

The Canadiens and Bruins last met in mid-May, when incomparable francophone hero Daniel Briere (and the last of the Canadiens significant departed players) took the team on his shoulders and carried it to a glorious game 7 victory at TD Garden. Since such a statement cannot be written and not qualified, please find visual evidence here:

With Briere now in Denver himself, the Canadiens won't be able to count on his clutchiness as they seek a season-opening victory this evening.

Of course, with each Fall, the new replaces the old. If #48 isn't available for a well-timed offensive overture, perhaps the Habs should look no further than their #49 to begin to pick up the slack.