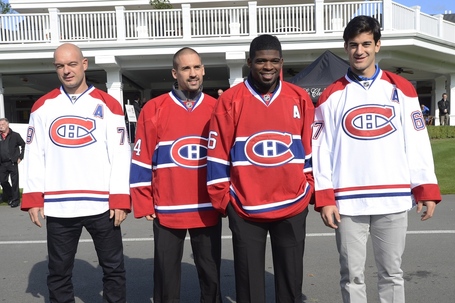 After July first saw the departure of Brian Gionta and his heir apparent Josh Gorges, there was a seemingly never-ending debate over who would fill their shoes. Would it be Andrei Markov with his new contract, his veteran status, his already existing position as an alternate, and the respect he commands throughout the organisation? Would it be Tomas Plekanec, the other veteran, player of the toughest minutes year in and year out? Would it be Max Pacioretty, coming off of a 39 goal season on the best contract in the league, who got the A when Gorges went down? Would it be Brendan Gallagher whose only knock is that he's only twenty-two? Would it be P.K. Subban, the face of the franchise with his charisma and undeniable leadership – showcased to the world in the Bruins series (and finally with that 8 year contract)? Or would it be someone else?

Every player had strikes against him, it seemed. Would Markov and Plekanec even accept the role if it was offered to them? Then there’s the concern that they talk to the media so seldom. Pacioretty and Subban (and Gallagher) are too young. Pacioretty has had issues with the media and the world has issues with Subban, and he takes a lot of penalties. People were saying the Canadiens should give the C to the young guys in a few years but not now, or give it to a young guy now and set him up with older, more experienced alternates. Some people suggested rotating a C or even multiple alternates (kudos to you later people who got it right).

A few weeks ago while waffling between Subban, Pacioretty and various others, I thought the Habs leaders were either going to be 100% predictable, or seemingly from left field, but would make sense anyway. I wasn't really right, but I wasn't completely wrong either. The players who got letters were more or less whom you'd expect. The decision to make them all alternates might be considered a little from left field. Regardless, it does make sense.

A team in transition

We have heard for weeks and weeks and weeks now that this team belongs to a core of young veterans, that there are a lot of leaders in the room, and that no mater who got letters, everyone would be expected to step up and lead. We have also heard that this is a team in transition. We saw Bergevin trade Danny Brière for P.A. Parenteau and a pick (consensus is that magic was involved – it was probably the suits) and let Brian Gionta, Douglas Murray, Thomas Vanek and George Parros walk. He locked up Subban for forever (yes it was a bit more terrifying than we would have liked, but it got done), and re-signed Markov, Lars Eller, Mike Weaver and Dale Weise. He added Tom Gilbert, he added Manny Malhotra, and he added Jiri Sekac. Yes it’s sad that Ryan White is no longer around, and that Gorges was forced off the team to which he gave heart and soul, but with these moves and additions the Habs got younger, better and cheaper. There is room now for that young veteran core to take over, but they also have a skilled group of more experienced players to guide and support them. Management has talked the talk, and now they're walking the walk.

Like their team, the Habs’ leadership is made up of veterans and young veterans. Where Pacioretty and Subban lack in experience they have Markov and Plekanec to help them. Where Markov may prefer not to talk, there's Subban, who will not only give you an interview, but will give you a good one. Moreover, it gives Pacioretty time to get used to a leader's role with the media, and while I'm sure Subban could have handled the joint pressure of a new and massive contract and the captaincy, it does take some of the pressure off of him (and will hopefully silence his naysayers). There's quiet brilliance and loud brilliance and leadership on and off the ice. There are guys who stepped up years ago, and guys who are stepping up now. There's youth and experience and talent through the roof. There is balance everywhere one looks.

For those who say leadership by committee doesn't work, I raise you the Eastern Conference champion New York Rangers. Sure they had two alternate captains, but Henrik Lundqvist and Martin St. Louis didn't have letters, and you can be sure they were leaders on that team. They didn't fall to the Kings through lack of leadership.

Moreover, hockey is a team sport. Many teams lead by committee; even teams like the Blackhawks that have a Jonathan Toews also have a group of leaders around him – and one could argue that the Penguins need more leadership, even helmed by Sidney Crosby). Even though they have superstars in Carey Price and Subban, and at the very least, and an elite player who’s only going to get better in Pacioretty (I think he's well on his way to superstar status myself), the Habs are a team that counts on all its players to help carry the load. The 2014 playoffs were a prime example of what happens when the Habs do things by committee and what happens when they don't. This is a team with a leadership core - maybe some guys stand out more than others, but it's a group endeavour.

Nor do I think this decision is a cop out because management couldn't decide whom to choose. Everything Bergevin has done this summer has been about handing the reins over to the younger players, but making sure they have the veteran presence to make the transition as smooth as possible, hopefully allowing the team to continue the upward trajectory of the last few years. I see the appointment of these four as such a transition.

Lastly, for the people who think four leaders will divide the Canadians, I would remind them that this isn't a team lacking a single player to rally around, fight for and follow. They have one. They probably would have given him the C if they could have. He just happens to be their goalie. This is Carey Price's team. Everyone knows it.

Would I have liked to see a captain named? Of course! It would have been exciting, and may well have worked out just fine. But based off of the things he's been saying, and the moves he's been making, I trust Bergevin to better this team with an eye not only on the present but on the future. I, for one, am eager to see where these four (and Price) will lead us.