How did Emelin perform after signing a massive contract and returning from a major surgery? Terribly, but not all hope is lost.

After signing a hefty contract extension with the Canadiens to the tune of $4.1M per year through 2018, Alexei Emelin's season couldn't have gone much worse.  First off, it's definitely worth noting that Emelin was generally used on the right side, due to Montreal's lack of natural RD. This proved to be a monumental challenge for the Russian defender, one that ultimately turned his resulting numbers into a horror show. Not only was he asked to play on his off-side, despite coming off a major knee surgery, but his workload also included facing some very tough quality of competition, and top four minutes.

His most common defensive partner was Andrei Markov, and we quickly saw Emelin's hard hitting ways  replaced by highlight videos that featured him on the wrong side of highlight reel goals. Not only could he no longer hit on the right side, but he was burned on what seemed to be a nightly occurrence.

Emelin missed the first 19 games of the season due to the aforementioned knee surgery. Upon his return his play left a lot to be desired, as his lack of pivot speed and the rust factor made for an easy target for speed forwards, as indicated by his early season numbers.

He did manage to normalize his possession numbers a little as the season went on, but for the vast majority of the season he was a black pit of puck control.

Emelin's decision making on the right side was quite evidently poor. His penchant for coughing up the puck while trying to clear the zone gave Habs fans nervous breakdowns, and his inability to mark players in the defensive zone was incredibly frustrating. There's no other way of putting it, on the right side of the ice Alexei Emelin proved to be a terrible defenceman. 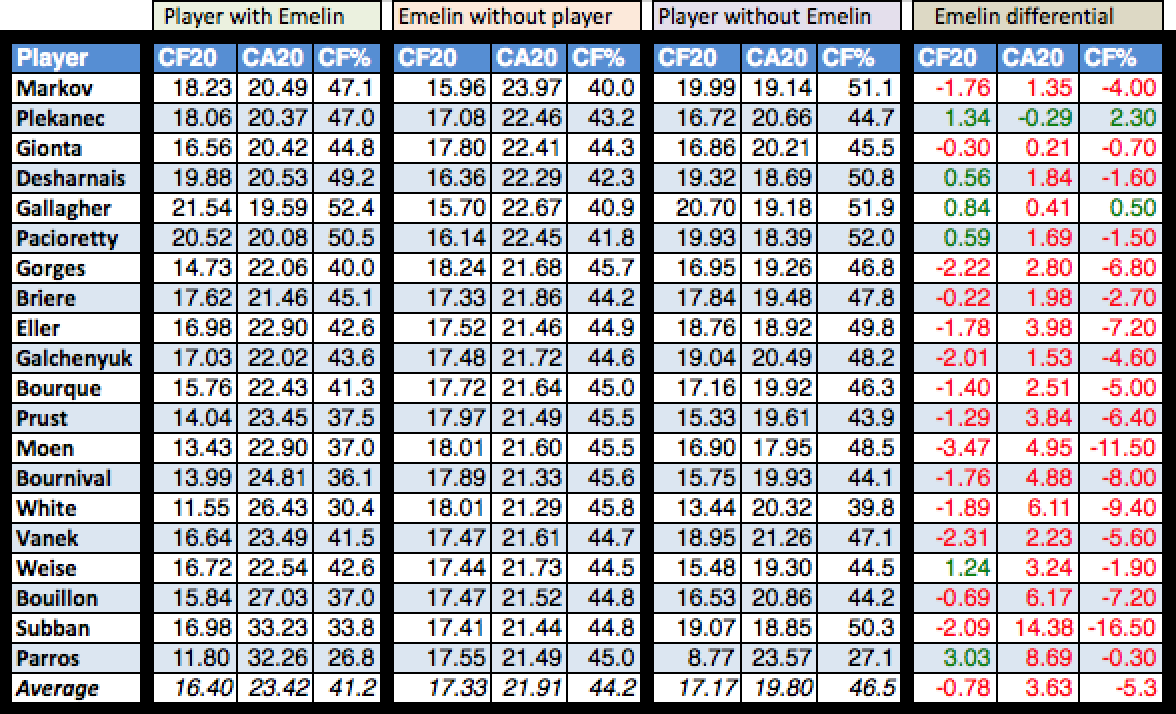 Emelin's WOWY chart is a horror show. Other than Tomas Plekanec, almost everyone on the team saw a huge dip in defensive and offensive numbers whilst on the ice with him.

It took about 45 games, but at one point in the season coach Michel Therrien tried to rectify the position assignment error, and placed Emelin on the left side of PK Subban. Although it's a tiny sample size, we can all see how well that worked out.

Did the Habs extend a very rich contract to a player who's numbers rival Douglas Murray in terms of poor play? Well, not quite.  Sure, the last season wasn't exactly encouraging. In fact, it was enough for most fans to place Emelin on the trade block.

However, let's consider the factors working against him. There was the major knee injury, the rust, his deployment on the right side, and the pressure of a new contract. You may think these are excuses, and frankly they are. There's no denying it, Emelin will need to be better if he hopes to contribute to the Habs in a positive manner.

With the addition of Tom Gilbert and Mike Weaver to the team, Emelin should find himself back on his preferred left side, which should do wonders for his defensive game, and it should allow him to apply some more of his devastating hits we've come to know and love.

Next year will be a big test for the Russian Olympian, as there will be no more excuses to sugarcoat his poor play.

I expect him to start the season in the top-four, although with some pressure from either Nathan Beaulieu or Jarred Tinordi, he might find himself on the bottom pairing relatively quickly if he continues to struggle.