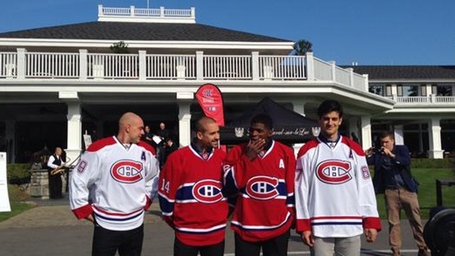 3 months, 1 story, 1 letter, C. The only thing all Habs fans have been asking since July 1 is "Who will be the captain?". The captaincy is obviously ruled by 3 or 4 probable names. Plekanec, Pacioretty Markov, and Subban. There was also 1 obvious front runner, Subban. The problem with choosing Subban is the incompetent people at Stanley Cup of Chowder. " Canada's Olympic Diver dives into the C" they'll say. Don't forget the empty heads at the CBC. The way MB has been handling this is very good. The conservative option was delaying the C and putting Subban and Pacioretty on the alternating A. Of course the media is obviously going to say " MB needs to grow a pair and decide who will wear the C".The C will go to one of the young guys (this is obvious because if Plekanec or Markov wanted it, MB would've given them the C in a heartbeat). The delegation of the C will have to do with the stats with and without the C compared by the Coaching staff or Management, along with the off ice character (Reacting to the media, locker room behavior, etc.). If only the stats matter, it will directly have to do with "high pressure situations" and Stats with the A vs stats without the A. It is sided with Subban with with the home-ice advantage, if you boil it down to only stats. Pacioretty does have the +/- advantage with the indescribable ability to score.

What MB should be thinking and My choice

MB has to analyze all of the factors in the decision. Don't panic, he knows what he's doing. The only factor that might be overlooked is the home vs away difference. there will be a definite difference in PK and Patches' stats while wearing the A. The Habs will need to see and compare the stats of a LW and a D-Man, The C will be given to a player at 41 or 60 games. Depending on the Habs record, they will either need leadership because they need to be shifted into the right direction or, (more likely) they are in a good spot and need a delegated leader in the locker room to keep their spot in the standings. The Management will not rush this at all, so don't get your hopes up. MB will think this through as much as possible before deciding. Michel Therrien will also have a say and will have a DEFINITIVE bias towards PK Subban. If the staff will get a pull in this decision, they will pick Subban.The C goes to Subban. The obvious, most popular choice is Subban, Pacioretty is just not as vocal as PK is as a leader, Subban acts like a guy that everyone would love to be. Subban's character is a quality that most teams can't get, or don't have. The Habs have a lot of options in the captaincy, and a lot of thinking to do. The easy choice here is PK and the stability in his 8 year contract makes him very intriguing.

The comparison between Pacioretty and Subban, Subban will NOT have higher stats.As many Habs Fanatics know, Subban had a hatty in his first NHL start and had 4 phenomenal seasons as a Belleville Bull. He scored 76 points in his 3rd season as a bull, and has won 1 norris. Max pacioretty has had 2 60 point seasons as a Hab. Only scoring 5 goals in the playoffs and has had 2 30+ goal seasons. They have had 2 drastically different careers, but 1 is a scorer and 1 is a D-man. Subban has had better career stats than most of the players, but has recieved the most hate. Many people do not like the way he acts, but I haven't had any problems.

Who gets the C?