On Camp, Sekac’s cardio and the Minimum Effective Dose

The Czech rookie made some noise with a record-breaking run, but what does it all mean?

Share All sharing options for: On Camp, Sekac’s cardio and the Minimum Effective Dose

On Day 1 of the Habs’ rookie camp, Jiri Sekac set the highest ever recorded score for a Habs player on the infamous "Beep Test."

It’s a great sign, to be sure, but we should also pause to wonder about whether players hitting especially high (or low) scores during pre-season fitness testing would cloud the judgments of decision-makers.

Most people in Hockey Ops get it right in the sense that fitness is an important aspect to test for and track, but it is just a part of the overall equation. For example, Francis Bouillon is a beast on the bench press and consistently tops the team in the event each September. Some of that is due to his off-season training regimen; some of it is thanks to his genetics (people with shorter arms bench more weight). Neither of those things happens to be particularly helpful on the ice, where he was the second-worst defenseman for the Canadiens in 2013-14.

Two stories come to mind when thinking about the pitfalls of using metrics such as one-repetition maximum, body fat percentage or cardio output to evaluate players in a training camp context.

Sometime in the mid-70s, Bobby Orr wrote an instructional hockey book (long out of print now, I’d assume) detailing his approach to both on and off-ice training. Orr mentioned that most NHLers, himself included, did relatively little off-season physical work and instead used their teams’ training camps to get back into shape. He also added, in passing, that several teams (the 1970’s Detroit Red Wings being one of them) had a tougher, more disciplined approach to keeping players in shape all year-round. Orr noted that these teams tended to start strongly in the fall months but rapidly lose ground midway through the season. The Hall of Famer hypothesized that those teams might have been working their players too hard, causing injuries and burnout.

With the league deeper and more competitive than ever, it could be tempting for players to bite off more than they can chew from a fitness point of view. If you work your butt off in the summer, arrive in camp in the best shape of your life in September and keep up your training routine to give your coaches the impression that you’re not getting complacent, how much gas will you have left in the tank come January?  Lifehacker/fitness guru Tim Ferriss proposed the idea of the "Minimum Effective Dose" for strength training in his book The Four Hour Body. For a league where each player is expected to take to the ice at least 250 times in a calendar year and step into the gym on a near-daily basis, he might be onto something.

A more recent example is that of Nazem Kadri, who was roundly criticized by fans, the media and even his AHL coach Dallas Eakins for back in 2012 for showing up to camp in "unacceptable" shape. 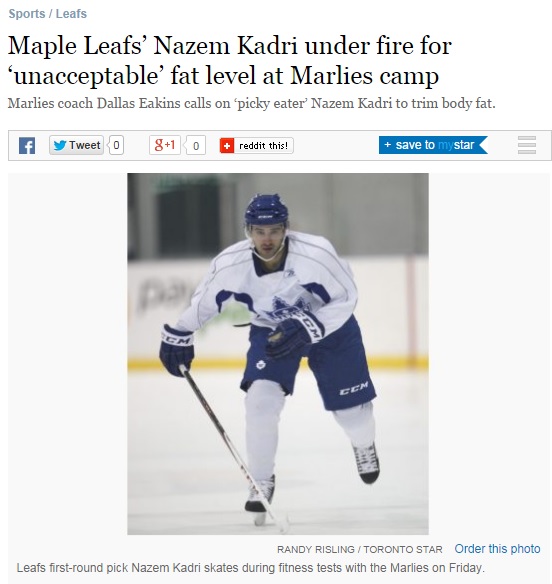 Lost in an initial reading of the article is the fact that Kadri had, in fact, been eating better and training harder under the supervision of Gary Roberts in the summer of 2012. For whatever reason, those gains did not initially show up in his fitness testing results. Of course, the record books would later show Kadri compiling 26 points in 27 games at the AHL level before making a permanent jump to the NHL after the short lockout, where he scored 44 points in just 48 season games.