Max Pacioretty evolved into one of the best goal scorers in the league last year, cementing his position among the elite players in the NHL.

To say that Max Pacioretty was one of the better goal scorers in the league last year is a slight understatement. Only two players managed to produce a better goals-per-game ratio than Max Pacioretty last season; Alex Ovechkin and Steven Stamkos. Pacioretty's key to scoring a deluge of goals was his penchant for shooting. Despite missing eight games, Pacioretty managed to finish in the top ten in the league in terms of shots taken with a grand total of 270. Another contributing factor to his goal totals was the fact that his shooting percentage was a little high (14.4%) compared to his career average (11.1%).

What stands out in Pacioretty's fantastic season is his game-winning goal total. Out of the Habs' 40 regulation and overtime wins, eleven of them were won by a Max Pacioretty shot. There should be no surprise that he ended up leading the league in game-winning goals. For reference, Steven Stamkos produced twelve game-winning goals in 82 games back in 2012, which should be a pretty good indication of how Pacioretty ranks among the elite goal scorers in the NHL. It's worth noting that despite his high goal totals, Pacioretty saw the least amount of average ice time among the top ten scorers, indicating that there's still some room for improvement when it comes to his production.

As was the case with Brendan Gallagher and especially David Desharnais, Pacioretty was given ridiculously easy zone assignments, which is always a smart application when discussing the usage of elite scorers.

As you can see, Pacioretty's rarely saw a heavy defensive zone start workload, although we must say that his Fenwick% stayed way above the team average for the majority of the season. The only dip we saw was in the final games of the season, when he was given Thomas Vanek as a linemate. Though the two had amazing offensive chemistry, they gave up an absurd amount of shots and chances against, making them a net negative.

Unfortunately, HockeyAnalysis.com was down when we were trying to put together Pacioretty's review, meaning we don't have the usual WOWY chart to show you. That being said, given that we've already reviewed Brendan Gallagher and David Desharnais, we have a pretty good idea of how Max Pacioretty affected his usual line mates. Essentially, Pacioretty is a possession monster, in that he enjoys spending the majority of his ice time in the attacking zone. When he's on the ice the team sees a major influx of shots for, and a decrease in shots against. It's not that Pacioretty is a particularly adept defender, however when the puck is 180 feet from your net it's only normal for your goalie to see fewer shots.

Although it must be said that Pacioretty did improve in terms of his defensive awareness this year, so much that he was relied upon by Michel Therrien to absorb a major increase in penalty kill time on ice. His 1:03 SH/TOI G in 2013-14 was way above his previous two year average, which was a meager 0:05 SH/TOI per game.

To make a long story short, Pacioretty evolved into one of the elite goal scorers in the NHL last year, and did so whilst improving his defensive acumen. I wouldn't count on him increasing his goal totals next season, however I am confident in saying that a healthy Max Pacioretty shouldn't have a problem cracking the 35 goal mark in 2014-15.

Sadly, despite his incredibly successful season, Pacioretty was the subject of a rather heavy amount of criticism, even drawing the ire from legend Guy Lafleur.  Of course, Lafleur was dead wrong in his assessment, since we've proven that Max Pacioretty definitely did help his team win, arguably more than any other forward in the league last year when discussing offensive output.

Many have criticized his penchant for avoiding the "dirty zones", preferring to play a perimeter game that keeps him out of the way of physical defenders in front of the net. When we pull up his chart and compare it to a player who's traditionally known as one of the best power forwards in the league, it's clear that Pacioretty has no issues heading to the net, as evidenced by the heat map.  Essentially, the idea that Pacioretty avoids going to the net is nothing but a terrible case of skewed perception. 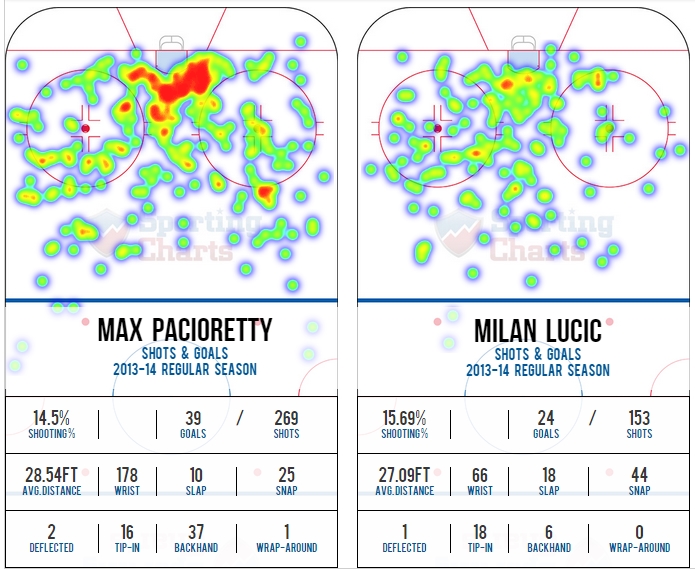