In 2013 Subban was far and away the best defenseman in the NHL, but was he as good last year?

For most players in this league, you would look at what P.K. Subban did last season, and immediately give him an A grade. But this is P.K. Subban we're talking about, and we have to remember that he's a special player. While that means it's essentially impossible to give him a poor grade, he's just too good, but with that talent comes expectations. You can't expect Subban to win the Norris every single year, not even Nick Lidstrom could do that, but Subban himself has high standards, and I don't think anyone believe that what he accomplished in the regular season was the best he could bring.

Not everything that stuck out as not amazing in Subban's season was under his control, certainly the wrist injury he suffered in November impacted his goal scoring negatively, and we know from scoring chance data that his poor on-ice save percentage was more due to luck than him causing more scoring chances against than usual, but the fact remains that the expectation level for Subban is greatness, not just really good.

Subban also struggled in penalty differential last season. He took slightly more penalties per minute played than last year, and drew slightly fewer, which resulted in him going from a positive differential to a very negative one. Whether this was Subban's fault is also unclear, to be honest. He gets a lot of so-called reputation phantom calls, and opponents are often allowed to run him with reckless abandon, but the fact is, we've seen better from Subban before.

I want to be clear in that I'm not saying in any way that Subban had a bad season. In raw relative Corsi Subban ranked 8th in the NHL among defensemen, and he did so without starting the majority of his shifts in the offensive zone, something that's incredibly difficult to do. He was also saddled with some terrible teammates, only Moen consistently played with a weaker group.

While Subban was far and away better than the rest of the team, he didn't have that truly elite season on a raw scale that we saw the season before. A lot of that was due to the Canadiens' system holding him back, some was likely due to injury, but we know from the playoffs that he had another level. 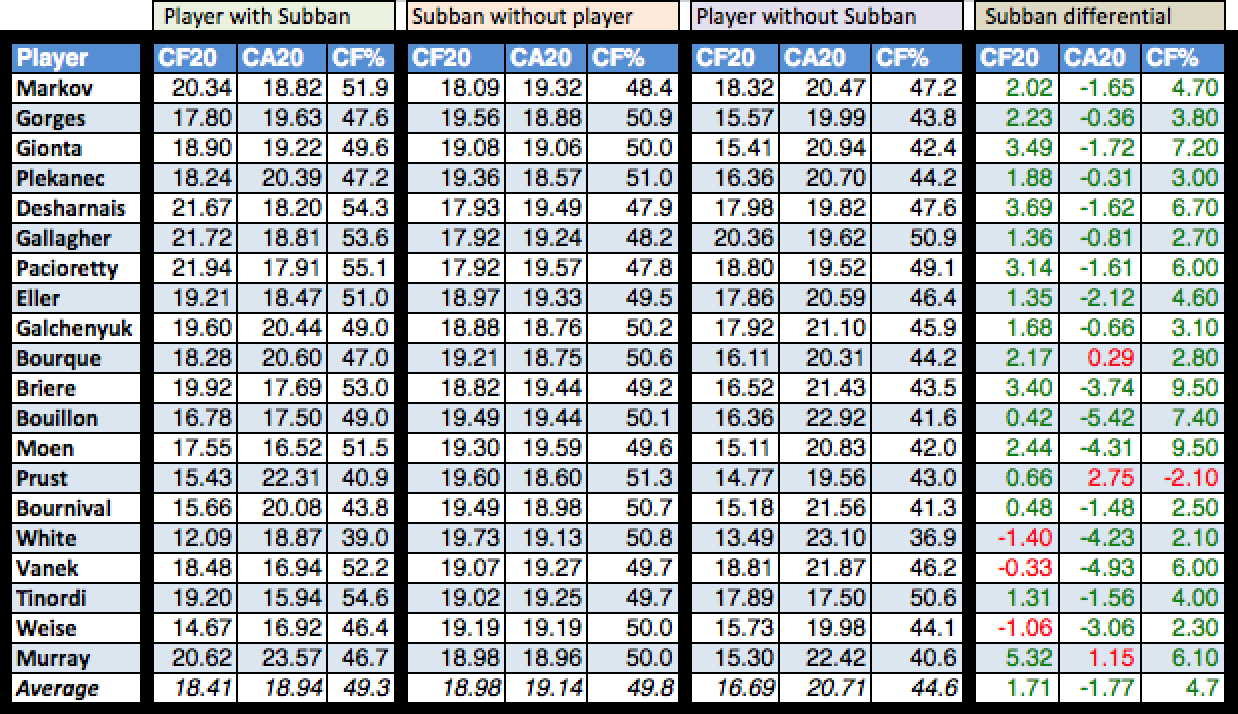 If there is anything that consistently shows the greatness of P.K. Subban, it's the WOWY chart. It is incredibly rare for a player to be better off without Subban than with him, in fact over the last two seasons, every single player that has spent 35 minutes or more with Subban has seen their performance get better, even though Subban plays relatively tough minutes.

Only Prust was worse with Subban than without him last year, though it's tough to discern why that would occur, it may simply be a sample size issue.

The facts for most players though, were that Subban increased offensive effectiveness while he was on the ice, and suppressed shots against at an even better rate. It's a stark reminder of how brutal the Canadiens were in the regular season at even strength that Subban actually had less than 50% of the shot attempts go his way, while continuing to be one of the NHL's best possession driving defensemen.