Andrei Markov is getting older & slower, but does he still help the team win? Absolutely.

When veteran Andrei Markov signed his three-year extension with the Canadiens this summer, many were curious as to why the Canadiens would commit to a 35+ guaranteed contract that paid the aging defender $5.75M over three years. Upon further review, not only was Markov an essential cog in Montreal's system, but there was absolutely no way the Canadiens could recover from losing the skilled defender without replacing him. Given that there were no similarly skilled defenders on the UFA market, Marc Bergevin made the wise decision to keep Markov in the fold for the next three seasons.

Even at 35, Markov led the team in Time on Ice / Game, absorbing over 25 minutes of ice time per game. For a player that many had pegged as old and broken, Markov clearly demonstrated that he has enough left in the tank to provide Montreal with a quality asset on the back end. At one point before sitting out a game late in the season for precautionary reasons, Markov was actually Montreal's Ironman.

As was the case with PK Subban, Andrei Markov collected the majority of his points on the powerplay (21 points), which ended up being good enough for fourth on the team in terms of scoring, to the tune of 7 goals and 36 assists. There's no denying that Markov has lost a fair amount of speed after his numerous knee injuries, but the fact of the matter is that he displayed to the hockey world that he's still one of the best offensive defensemen in the league.

And as it stands I'm quite comfortable in stating that his extension was the right decision. Frankly, it was the only decision that made sense.

It's worth mentioning that Markov's most frequent defensive partner was none other than Alexei Emelin, who as you probably already know had the worst season for any returning Habs defenders. When he wasn't saddled with Emelin, Markov found his way onto a pairing with PK Subban, however this turned out to be an embarrassment of riches on one pairing, whilst leaving the other pairings to struggle. 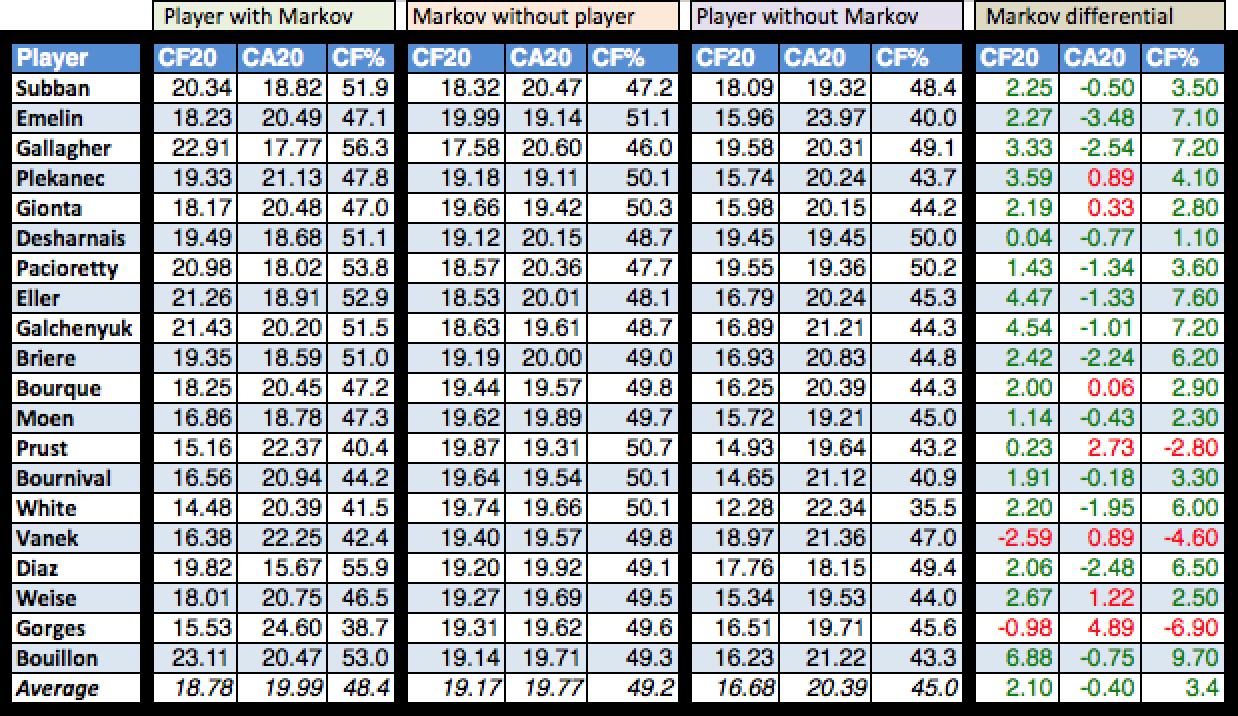 The General's WOWY chart is a thing of beauty. His effect on the entire roster is quite significant, as the vast majority of the team produced more offensive attempts when Markov was present on the ice. Defensively, the team allowed fewer chances whilst Markov was patrolling the blue line, given that the puck was more often than not 200 feet away from Carey Price or Peter Budaj.

You may be wondering why Markov's numbers with Josh Gorges seem to be terrible, and we can explain that via their usage. The two were very rarely paired together, leaving us with a very small sample size to analyze.

The most important part of the chart in my opinion, was his effect on Emelin. Despite struggling all year, it's fair to assume that Emelin would have produced even worse numbers if he was not paired with Markov. Just take a gander at Emelin's brutal numbers away from Markov for confirmation.

Markov isn't the same player as he once was. He's older & slower, and simply cannot provide the same timely offensive pinches as he once was. These realities were surely factored in when Bergevin offered Markov an extension, although they were certainly coupled with all the positive factors provided by the Russian veteran, which are numerous.

When it comes down to it, Markov helps this team win when he's on the ice, and in the long run that's all you really want to see from your players. Ideally, Therrien will start to lighten the load on his favoured defender, however the numbers don't lie, Andrei Markov still has a lot of hockey left to play. The fact that he played in over 100 games last year is all the evidence we should need.