What, did you think we'd be starting with the sexy names? Everything is a build up, folks. So we start the season reviews of the players still in the fold with Travis Moen, who may not be in the fold much longer.

I have to admit, when I started putting together the graphics and stats for Travis Moen, my initial thoughts on him were that he was a player the Canadiens did not need. He was superfluous, barely used at all when it came to the games that mattered, an easy player to move on from.

The fact is, I forgot how good Travis Moen was for the first three quarters of the season. I forgot that the only time he really struggled last season was when returning from injury, but that's kind of the trouble with Moen, at 32 he's beginning to pile up the injuries, especially concussions.

Yet even with the concussions, it's tough to ignore that Moen did exactly what you want him to do last year. He played tough zone starts against relatively soft competition, playing with the dregs of the Habs' lineup (which was really, really bad), drew more penalties than he took, and put up semi-decent possession metrics, while chipping in the odd point. Sure Moen's numbers aren't impressive on the surface, but that's because he's a fourth liner. And let's be honest, your top linemates being Ryan White and Brandon Prust is not helping you at all.

Remember the first 10 games of the season when Travis Moen was the best possession player on the Habs? I'd forgotten too, but he was pretty excellent in some easier minutes provided by Michel Therrien. He hovered pretty close to team average for most of the season, and you can actually see that the team's performance (the red line) suffered every time he was out of the lineup. Whether that's a coincidence or not is up to the interpreter. 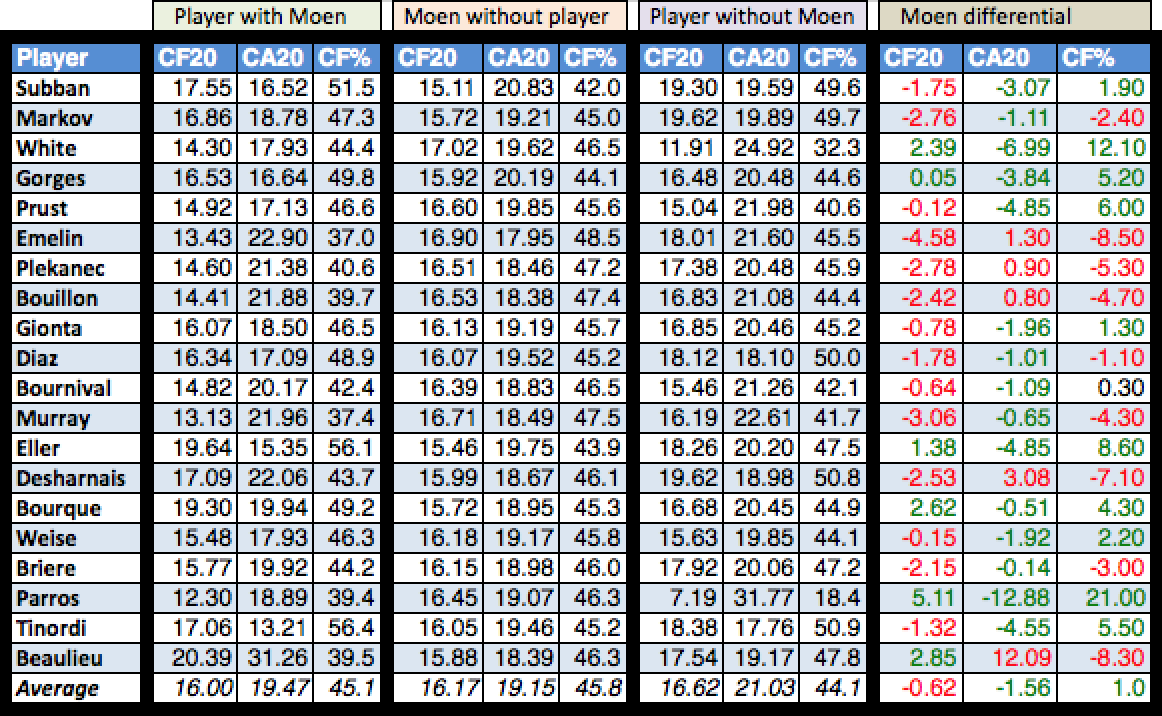 Here's the most surpsing thing of all, Moen was actually a positive impact on his linemates, and his long vaunted skill of shot suppression at even strength doesn't seem to be gone, at least not entirely. Clearly Moen was a huge drag on Tomas Plekanec when put on that line, because he's no longer capable of simply surviving in those minutes, and he's no longer a solid third liner either, but he is definitely an above average fourth liner that can give you solid defensive minutes and chip in a surprising amount of offense.

Based on last season, if concussions haven't severely hampered Moen's ability to play the game, he is absolutely deserving of a roster spot. The trouble is, at left wing he has to fight it out with Brandon Prust on the fourth line, and although he was way, way, way better than Prust last season, the team committed more money to Prust, and seems to like him a lot more.

Luckily for Moen though, his skills haven't depreciated to the point where he isn't tradeable, even with a fairly expensive contract. There are a lot of teams whose fourth lines would improve with him on them.