Despite a great performance in the playoffs, Rene Bourque's play during the regular season was anything but brilliant.

Bourque's season ended on a very negative note, as the two-time 27-goal scorer failed to crack 20 points over 63 games, bringing his total offensive output with the Canadiens to a meagre 21 goals and 16 assists in 128 regular season games. Compare that to the 96 points Mike Cammalleri put up in the same time frame and it's clear that Montreal was swindled in that trade.

Since there's no point in crying over spilled milk, let's just be happy that Pierre Gauthier is no longer in charge of making trades and that Bourque is only under contract for two more seasons.

As you can see above, his offensive numbers were legitimately poor, especially considering he played a fair amount of the season (11.08%) alongside Tomas Plekanec and Brian Gionta. When away from Plekanec, Bourque played most often with Lars Eller and either Brandon Prust, or Alex Galchenyuk, with neither trio showing much chemistry or offensive prowess. 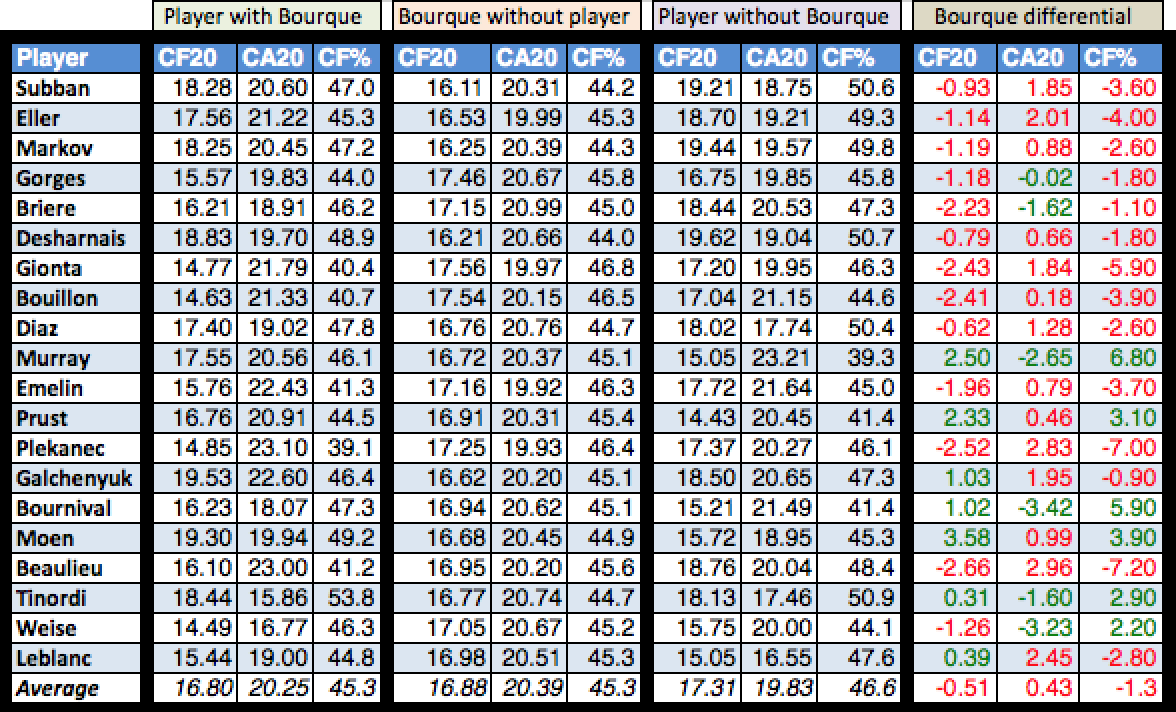 Any time Bourque found himself away from a fourth line roll he struggled, however to his credit he played quite well when called upon to play with other fourth line players, like Weise or Moen. To be fair he displayed a significantly lower shooting percentage (7%) last season than his career average (11%), but even with the luck factor included Bourque's regular season was just short of disastrous. His on-ice team shooting percentage was among the lowest on the club (6.12%), however his on-ice save percentage (.947) balances out his PDO to 1008, which is considered average.

The silver-lining in this grim story is that Bourque played quite well during Montreal's recent playoff run, to the tune of eight goals and three assists in seventeen games. His chemistry with Eller was on display, as Bourque's line became Montreal's main offensive threat throughout the first two rounds. Incidentally, Bourque struggled alongside Eller during the regular season, leading me to believe his performance with Eller during the playoffs was a bit of an outlier in the grand scheme of things.

Bourque can score goals when he wants, but he rarely seems inclined to do so. Going into the trade deadline I wouldn't be surprised if Bergevin attempted to trade him and free up some much needed cap space. Unfortunately the Habs won't get anything close to a Mike Cammalleri in return, instead they'll likely have to accept a mid-round pick for the undrafted winger. Of course, that's if they manage to trade him, which seems like a daunting task considering his ten team no trade clause and non-expiring contract.

What can we expect going into 2014-15? More of the same inconsistent performances we've come to know and get frustrated by. Offensive flash followed by lethargic performances seems to be the Rene Bourque way.