Max Pacioretty and David Desharnais are not inseparable

It's been talked about for years, multiple coaches have been hesitant to break it up, but the Pacioretty and Desharnais duo is not inseparable.

Share All sharing options for: Max Pacioretty and David Desharnais are not inseparable

As the summer drags on the stale conversations of Canadiens fandom rear their ugly heads, with one of the most common being "What to do about Max Pacioretty and David Desharnais?" Most fans are more than happy to keep the two together, since they seem to like each other a lot and their play seems beneficial. However years of looking into their relationship on the ice has made me skeptical that Desharnais is that much of a trigger for Pacioretty's goal scoring.

Inspired by some work being done by Hope Smoke on twitter, where he discovered that Henrik Sedin has primary assists on a whopping 57% of his brother Daniel Sedin's goals over the last three seasons. The Sedins are notoriously in sync with each other, so I saw this and figured it would be an interesting way to look at Pacioretty and Desharnais. How often does the designated passer immediately set up a goal for the designated shooter?

Going through NHL.com's game sheets, I realized that I needed a comparable on the Canadiens as well, to see if Desharnais' primary assist rate was truly spectacular on Pacioretty's goals. As it turned out, Desharnais was the primary set up man for 26 of Pacioretty's 92 goals over the previous three seasons. You might be surprised at that low number, but it's actually quite a lot, 28.3% of Pacioretty's total goals were set up directly by a Desharnais pass. Some solid chemistry there.

Pacioretty is the Habs' best scorer since Lafleur

Max Pacioretty who has been labelled a "perimeter player" "streaky" and "another Mike McPhee" scored 39 goals this season. Let's look at them all shall we?

Pacioretty is the Habs' best scorer since Lafleur

Subban on the other hand, has spent significantly less time with Pacioretty than Desharnais, just 44.5% of Pacioretty's total ice time in all situations. That puts his available Pacioretty goals to set up at just 41, and increases the percentage of Pacioretty's goals he created to 34.2%, almost exactly as much as David Desharnais, even though he's a defenseman.

What does this mean?

Where is the magical chemistry between the two players that everyone talks about? If Subban ends up setting up nearly the same amount of Pacioretty's goals per minute while playing from the back end, that suggests that the so-called magical chemistry between the two isn't really that magical. Centers assist on their wingers goals, but Pacioretty is by no means reliant on Desharnais to score, even if they work well together offensively.

The narrative that Desharnais is what makes Pacioretty tick has never really held up to scrutiny, and this is one more instance where that idea fails to pass  muster. Considering how great a possession player Pacioretty is in all situations, how much the Canadiens mortgage in zone starts to ensure Desharnais spends as little time in the defensive zone as possible, and that there doesn't seem to be any special chemistry between the two turning into goals, it's about time the Canadiens begin experimenting with different players centering Pacioretty. Putting Pacioretty with another center while continuing to shelter Desharnais should ensure that both player remain productive, and then you have two lines pushing play instead of one.

I received a bunch of requests to show how Pacioretty's goals were assisted on by other players than Subban, specifically other centers.

I took a little while and crunched the data, and using the same methodology, here are the results: 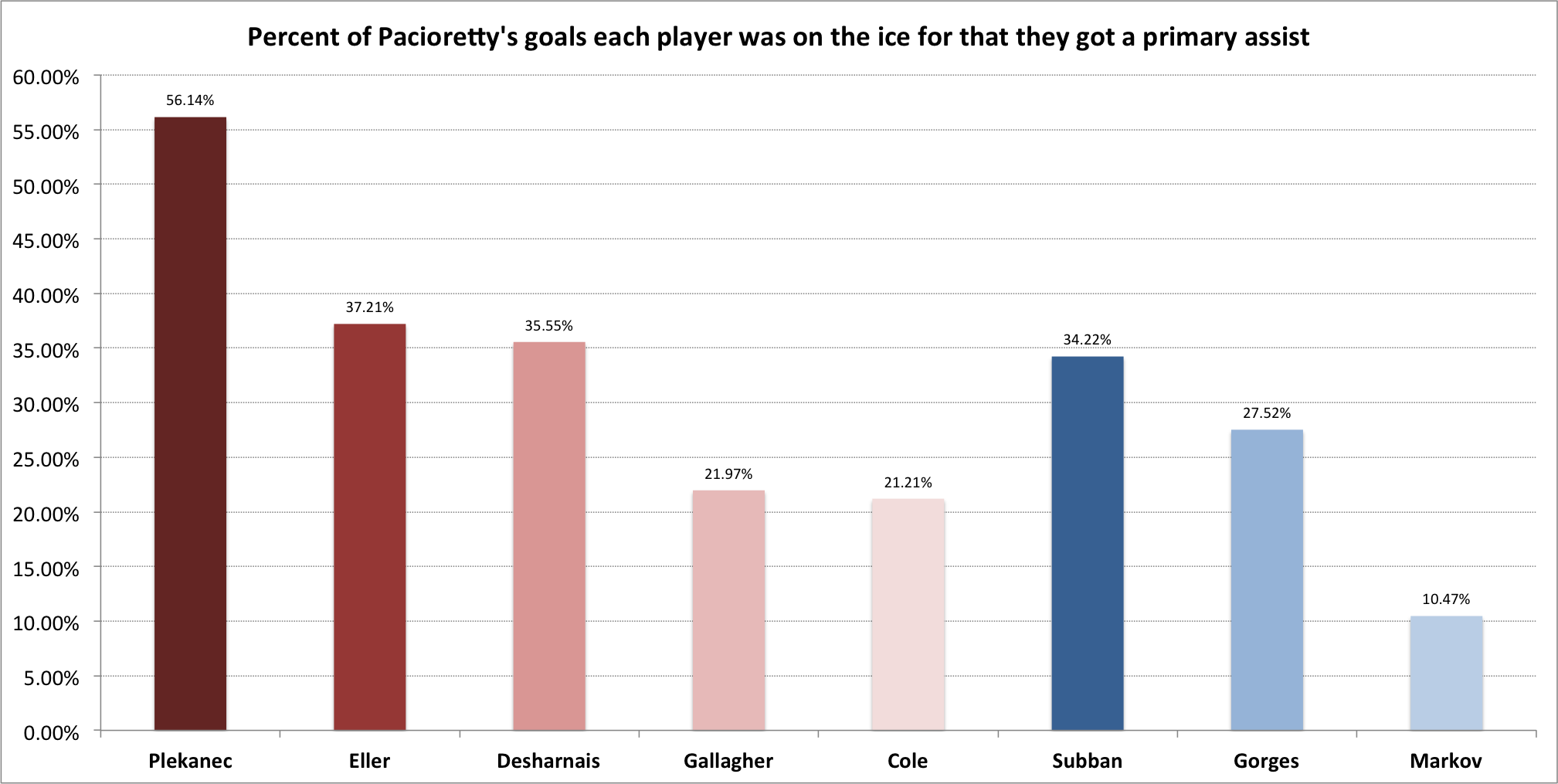 I would urge some caution in these numbers, and the reason why I didn't include them initially is because of the sample size issue involved. Eller has only been on the ice for 5.84% of Pacioretty's total ice time the last 3 years, and a lot of that was on the penalty kill last year. Plekanec isn't too much better off, sharing just 9.68% of Pacioretty's ice time. The raw numbers are low, but as you can see pretty clearly, the direct impact Desharnais has on Pacioretty's scoring seems to be minimal. I would wager that if he spent more time with Eller or Plekanec, he would develop chemistry with either of them and his goal scoring would actually improve.