After a surprising start to the year, Michael Bournival brought energy, speed and a surprising amount of shots to the team. How would you grade his season?

Coming into the 2013-14 season Michael Bournival was projected to spend his second year as a professional with the Hamilton Bulldogs, however he was one of the rare examples of a player impressing at camp and landing a full time position with the parent club. His high energy and tenacity proved to be an asset to the team, as he established himself as a quality player in the fourth-line position he was placed in.

Bournival spent the majority of the season with a plethora of bottom-six players, like Travis Moen, Ryan White, Dale Weise, George Parros and Brandon Prust. However, the most impressive part of his inaugural NHL campaign was his tenure on a line with Tomas Plekanec and Brian Gionta. As Habs fans we all know how tough it is to keep up with Plekanec's hellish duties, since several coaches have continuously struggled to find a suitable line mate. Bournival not only managed to keep up, but he excelled in the position, so much so that he found himself on their line during almost 30% of his playoff shifts.

His Fenwick % follows a similar path to his defensive deployment, and as we can all see Bournival was rarely placed in a position to succeed offensively. Bournival's speed and work ethic earned him some fanfare from Canadiens fans, especially with his voracious forecheck that continually put veteran defensemen on their heels. His slick hands were on display from the get-go, as evidenced by his first NHL goal.

What really stands out about Bournival is the trust that Michel Therrien put in him as a rookie. Therrien is notable in his mistrust of rookies on the defensive side of the puck, but look at Bournival's deployment towards the end of the season, sticking below 20% offensive zone starts. He struggled in those minutes, but the fact that he was trusted with them at all as a 20 year old rookie speaks volumes. 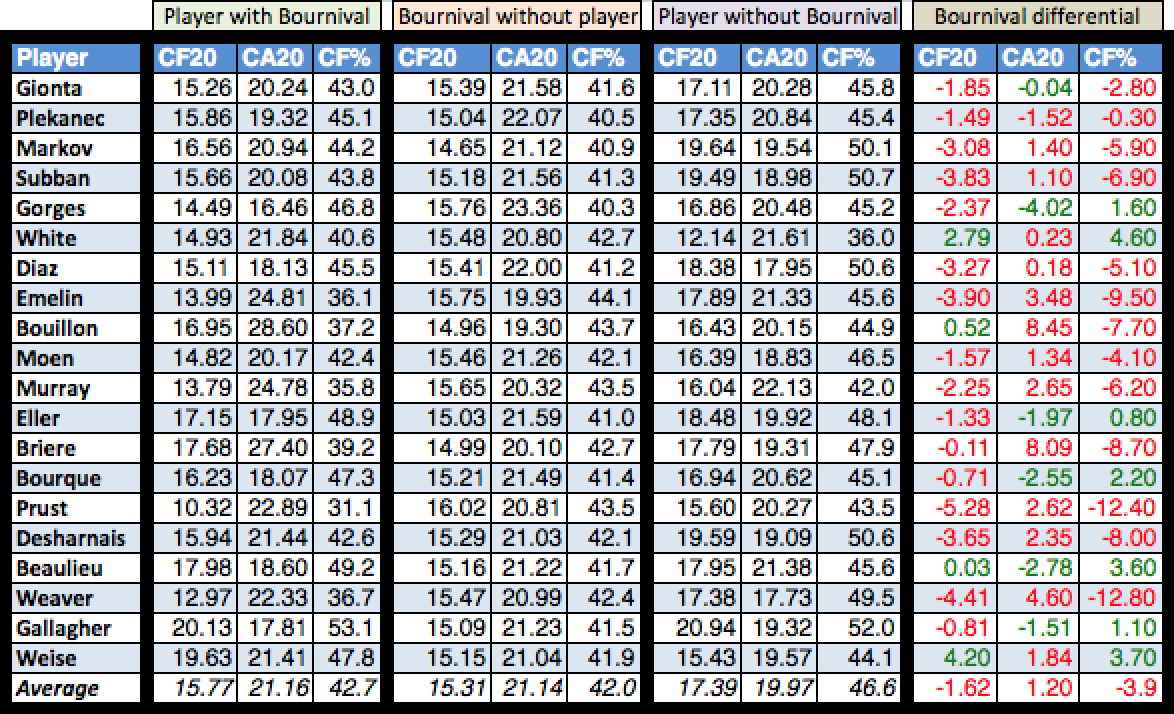 Bournival's WOWY chart isn't particularly great, although we do have to keep in mind his limited usage, rookie status and minimal offensive zone starts. Unfortunately for Bournival, he suffered a concussion on February 6th due to an errant Dale Weise stick. Following his brain injury Bournival only managed to put up one goal in ten regular season games, all the while displaying a little less fury than the player who managed to make the team out of training camp.

The ace Bournival holds is his penchant for creating scoring chances. Like Max Pacioretty, Michael Bournival loves to put the puck on net, which is a huge plus for a shot starved team like the Canadiens. As it stands, the Habs are once again tasked with finding Tomas Plekanec suitable wingers, meaning Bournival might find himself a niche spot on a shutdown line, although the assignment may be too large of an undertaking for the second-year winger.

Despite a reasonably strong freshman campaign, Bournival's spot in the lineup next season isn't assured. He'll face stiff competition from several players, rookies and veterans alike. Although he possesses the ability to create a myriad of scoring chances, Bournival will likely be fighting for a bottom-six roll once training camp begins. Michel Therrien will have to choose between the Shawinigan native, and a responsible veteran like Travis Moen. Whereas Moen has experience and defensive awareness on his side, Bournival has speed, energy and offensive potential to spare.