Dale Weise became somewhat of a folk hero after being acquired in exchange for Raphael Diaz last season.

Traded straight up for Raphael Diaz, Dale Weise came to Montreal with very low expectations, but delivered big time in both the regular season and playoffs. Weise's high-end skating ability combined with his size makes for an above-average fourth liner when put in the right situation, and he found himself in the right situation a ton. You can see from Weise's points-per-minute ranking that he produced at a much higher rate at even strength than could be expected, and that only got better in the playoffs, scoring key goals to help eliminate Tampa Bay and Boston.

Weise's production is even more impressive when you consider the extremely tough zone starts he had to deal with, though it's not all rosy for him. Playing with some of the best teammates of any player on the Canadiens, Weise was still pretty horrible possession-wise, and he gets three strikes in the signs that his production last year was completely unsustainable. Weise had a crazy PDO, meaning his on-ice shooting and save percentages were much higher than what can be expected to continue, his personal shooting percentage in 2013-14 (15.3%) was over double that of his career to date (7.4%), and his individual points percentage was way out of whack with a player of his role. Every sign that we have points to Weise's production being more luck than skill, and it not remaining another season.

It's extremely interesting how closely Weise's possession numbers mirror his zonal usage. It's obviously not a 100% correlation or anything, but it's possible that Weise is one of those players that is whatever kind fourth liner you need him to be. He's not a scorer, but he can chip in occasionally, and in extremely tough usage he doesn't really hurt you. The main asset of Weise's game is his speed, something that allowed him to be particularly effective against Boston in the playoffs. He can play both on a defensive sacrificial line, like he will likely do with Manny Malhotra next year, and he can play on an offense-focused fourth line like he did with Daniel Briere. In essence, Weise is versatile, and that's valuable in a fourth liner. 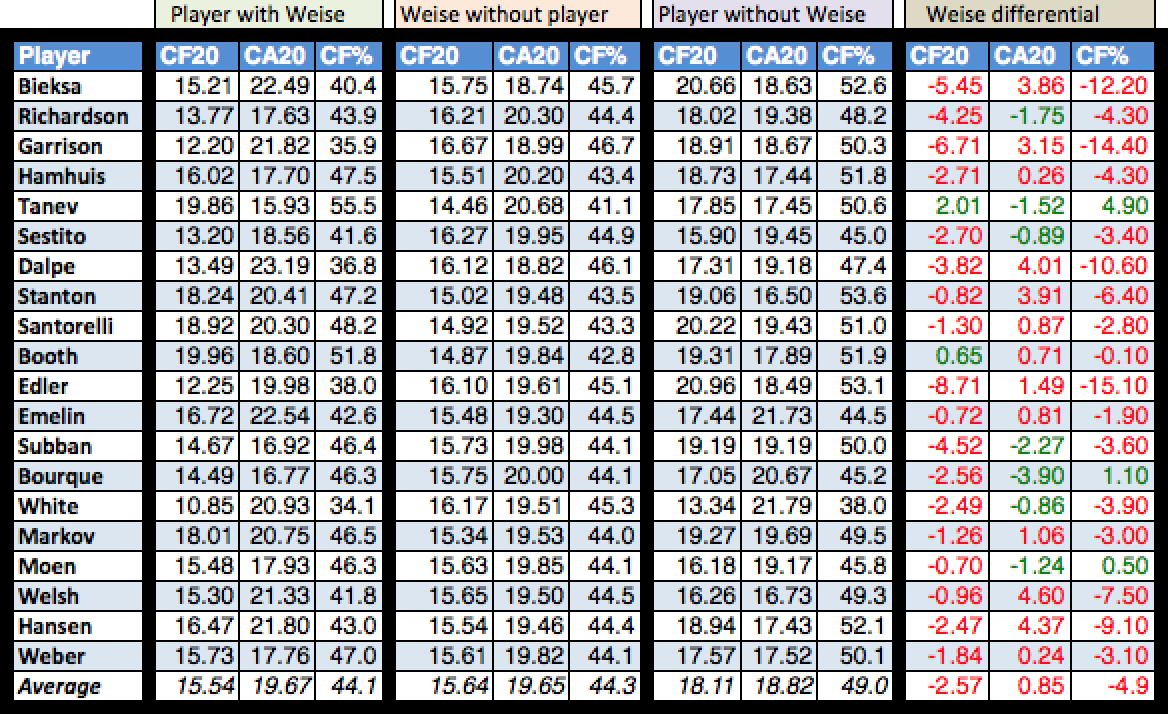 Like I mentioned before, Weise's possession numbers aren't very good, but they are slightly understandable given his usage. The main worry in this chart though is the impact Weise had on Bieksa and Garrison, two pretty good defensemen in their own right who are accustomed to fairly tough minutes. These two were Weise's most common defense tandem last year, and he drove them right into the ground. Usually you get a couple of outliers like that lower down the chart, but this kind of impact with the players he played with most is a big of a red flag.

Due to his crazy level of production over 33 games with the Canadiens, along with some A+ trolling of Milan Lucic, Weise has received a lot of love from Habs fans. However everyone should recognize that last year's small sample isn't something that should be expected of Weise, especially since he'll likely be playing a tougher role next year. No one should expect him to stay on a 27-point pace and score 15 goals, if anything you should expect five goals and 10 points. In essence, don't turn on him when he can't keep up last season's highs.