It took a while, perhaps too long, but it seems as if Nathan Beaulieu is here to stay. There's little evidence to suggest that's a bad idea.

To say Nathan Beaulieu's season was a rocky journey would be understating the 21-year-old's story. Last summer was filled with off-ice drama, as Beaulieu and his father were involved in a fight that led to the pair pleading guilty, and consequently being granted conditional discharges by the courts. Following a reasonably impressive training camp, Beaulieu was then turned into a human yo-yo by general manager Marc Bergevin.

No, seriously, he collected enough frequent flyer miles to pay for a free trip to the moon: 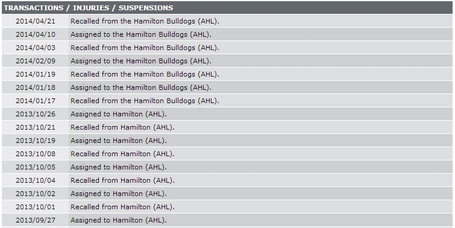 Other than travelling from Montreal to Hamilton more often than a CFL referee does in a decade, Beaulieu was called upon to dress for 17 games this year with the Canadiens, where he was generally slotted on the third pairing, alongside either Douglas Murray or Francis Bouillon. It was immediately apparent that despite his below average defensive partners, Beaulieu brought a desperately needed element to the Canadiens blueline; mobility.

Beaulieu faced a slightly higher quality of competition than fellow Bulldog Jared Tinordi, and easier zone start assignments. It's only fair to mention that  his longest stretch with the team was during a possession drought prior to the Sochi Winter Olympics. Despite less than favourable conditions for a rookie, Beaulieu played well enough to deserve a spot with the Canadiens throughout the rest of the season, and it came as quite a shock when he remained in the minors until the Stanley Cup Playoffs.

Even once the playoffs had begun, it took an elimination situation in the Boston series for Michel Therrien to insert the puck-moving defencemen in the lineup. Beaulieu made an immediate impact, as the difference between he and Douglas Murray turned out to be a game-changer. Montreal would go on to win the series in seven games, partially thanks to Beaulieu's ability to carry the puck, quick zone clears and crisp passes. 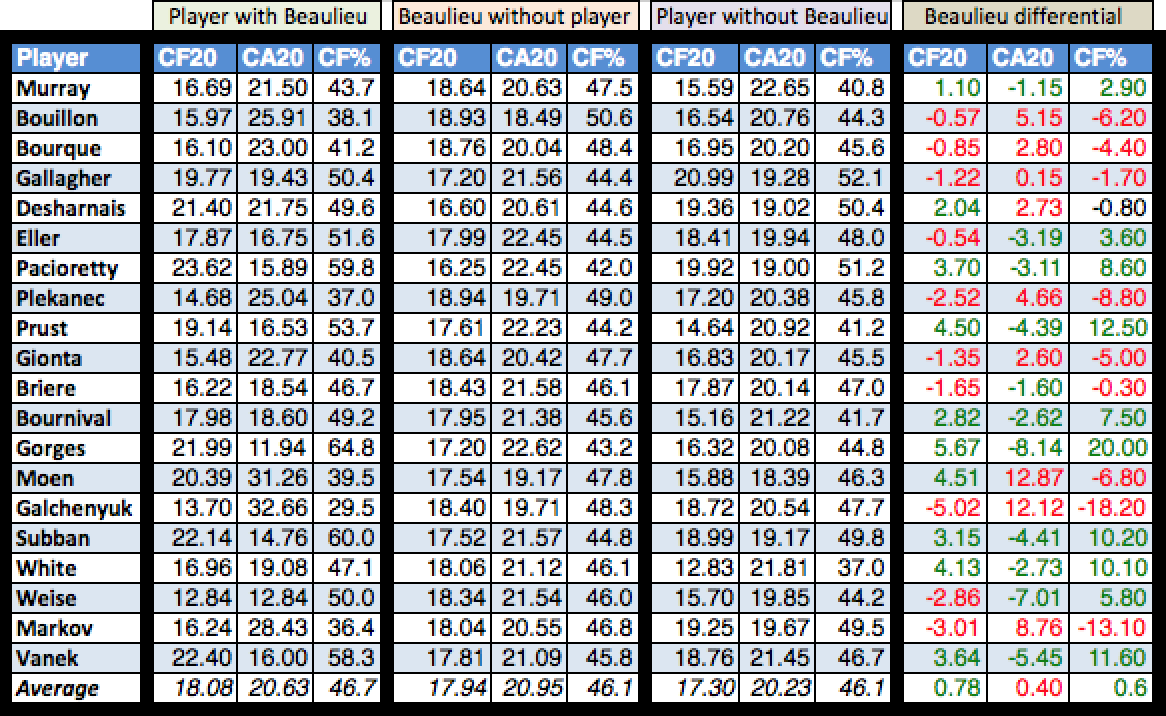 Beaulieu struggled a little alongside Bouillon, yet he actually managed to improve Murray's numbers. Going into next season neither of those numbers actually matter. What's more interesting was his results next to P.K. Subban. With Josh Gorges having been dealt to the Sabres, Michel Therrien will need to find his best player a suitable partner. The obvious choice seems to be Andrei Markov, although the numbers seem to suggest that Nathan Beaulieu might complete a fantastic pairing with Subban.

Beaulieu's clear strength lies in creating scoring chances, as seen from his positive CF20 (Corsi For / 20 mins) overall rating. He still shows a negative in terms of chances allowed, however that should improve as he's given a less ridiculous travel schedule and a better partner.

Don't expect Beaulieu to start the season on the top pairing, in all likelihood he'll find himself playing with veteran Mike Weaver, while picking up minutes on the second power play unit. That being said, if Alexei Emelin continues to struggle, Beaulieu might find himself in a top-4 situation sooner rather than later.

As a puck-moving defenceman in a league where every single turnover is scrutinized, Beaulieu won't be immune to criticism by fans and the media, however we should keep in mind that the cost of having a quality mobile defenceman on your team is that you'll suffer a few turnovers here and there. Is the trade-off worth it? Without a doubt. Let's just hope that Beaulieu is given some leeway this year, as his offensive game can be a huge asset to the Canadiens going forward.