The Canadiens are depending on Jarred Tinordi to take a big step forward soon, and the hulking defenseman might be ready to take that step right now.

After a late season call up that saw Tinordi play consistently in the 2013 playoffs, it was expected coming into last season that he would be a fixture on the Canadiens' blueline, and after a dominant preseason, it looked promising. But while Tinordi was putting together some beastly possession numbers, his scoring chances didn't follow suit, and when Douglas Murray got healthy, it was down to the minors with him. Tinordi was called back up for a month's worth of games in late February, but in the end he played just 22 games last season.

Given fairly easy minutes, Tinordi crushed possession last year, especially while the game was close, the second straight year he's shown himself to be a pretty dominant possession player in soft minutes. With that said, he didn't have a great goal differential due to a fairly poor PDO. Some of that can definitely be chocked up to poor luck on both sides of the puck, but the fact is that Tinordi is still bleeding scoring chances against at a significant rate. The good thing is, that will change as he polishes his game and adjusts to the NHL.

That Tinordi is able to push possession so well is an extreme rarity for his profile, something Bruce Peter pointed out last year in his Top 25 Under 25 profile. This development is yet another feather in the cap of Canadiens director of amateur scouting Trevor Timmins, who seems to constantly find exceptions to the rules. 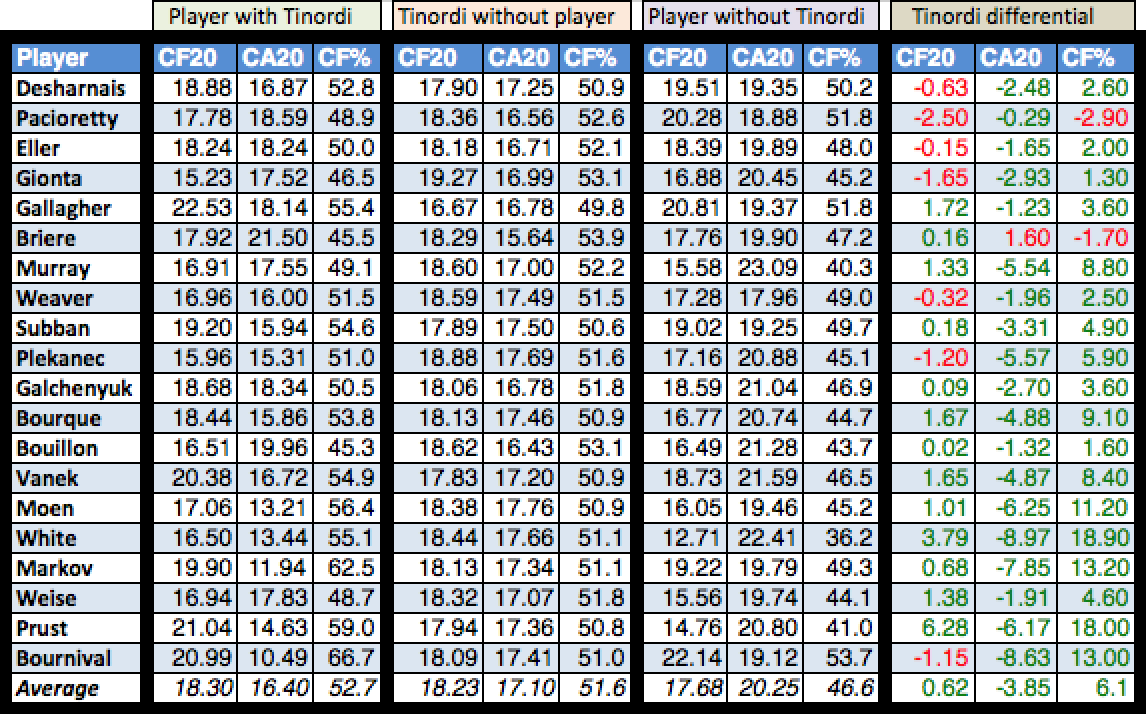 It's important to note once again that Tinordi did play pretty easy minutes, which does impact his WOWY statistics, but this graph is perhaps the strongest argument for him making the Canadiens next season out of training camp. Soft minutes or not, most players who took minutes with Tinordi saw a significant improvement in results.

Right now Tinordi isn't as polished overall as Nathan Beaulieu, and doesn't bring the same level of offensive skill to the table, but there is a ton to look forward to here. He hasn't played enough games to be definitive, but the bigger the dataset gets, the most positive the outlook is for him. Going into last year I was fairly convinced that Tinordi would top out as a great third pairing shutdown defenseman, but I think his ceiling could be higher than that. In fact, if he can learn to get his own shot on net, he may even develop into a pretty solid goal scorer, we all know he has the power in his shot.