As our season reviews continue, today we take a look at the under-appreciated veteran Mike Weaver. Spoiler alert: He suits his role quite well.

Mike Weaver was brought into the fold in March to stabilize the Canadiens defensive corps, as well as to add some balance in the LD/RD conundrum. No one expected Weaver to produce much offense, although he performed surprisingly well in that respect to the tune of a goal and seven assists in 17 regular season games.

Despite a rather unimpressive start, the veteran defender rose to the occasion as his minutes were increased, and cemented himself as one of the most reliable players on the blue line. You may be wondering why I am so quick to throw praise towards the defender that had seemingly mediocre numbers, but the reality was that Weaver was saddled with an gigantic Swedish anchor in the form of Douglas Murray for almost 30% of his shifts. His other common partners included rookie Jarred Tinordi and veteran Francis Bouillon.

When we combine his lack of offensive zone starts, quality of competition and the possession destroyer known as Douglas Murray, it was a perfect recipe for a terrible year, yet Weaver managed to perform well despite all the cards being stacked against him.

It wasn't a Norris-worthy campaign by any means, but it did earn him a contract extension with the club, to the applause of many fans and pundits alike.

I should probably mention that Weaver had an excellent playoff run, despite once again being saddled with players like Douglas Murray and Francis Bouillon. 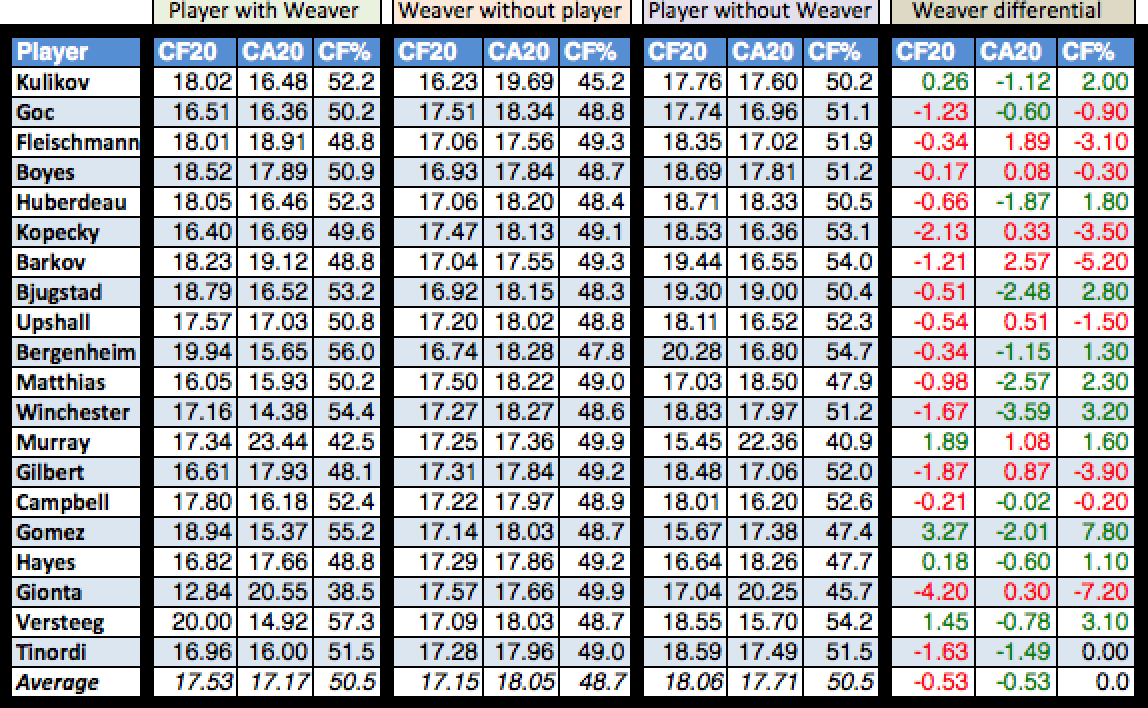 You'll notice that there's a fair amount of Florida Panthers players listed in the WOWY chart. That's due to the limited sample size we had to work with following Weaver's trade to Montreal.

What can we take from his effect on his former Florida teammates? For one, he had a positive impact on nine of of them, and a negative impact on eight. He was playing in a position that was over his skill-level, but nonetheless managed to produce some decent numbers.

His results in Montreal,  limited as they were, showed a positive impact on Douglas Murray, which is quite the feat.  Overall, his effect on his teammates can be considered quite neutral considering the average variance (0%), yet we do have to keep in mind that Weaver rarely saw an offensive zone start. For a third pairing defenseman, Weaver performed quite well compared to the league average.

The veteran did show a negative impact on scoring events for (CF20), yet gave us a positive impact in terms of scoring events against (CA20). In simpler terms, Weaver doesn't help us much when it comes to providing offense, he does however limit the amount of chances against compared to the team average.

When it comes down to it, that's exactly the type of player you want on your third pairing. Instead of bleeding scoring chances against, he limits them.  Instead of having to be sheltered, he was exposed and performed quite well. Instead of relying on size and big hits, he uses intelligent positioning and smart decision marking to defend. It's a nice change of pace from who we've seen in the #6 spot in the past.

I, for one, am quite glad we'll have Weaver on board for another season. He's the type of veteran presence that not only serves as a mentor for young players, but also helps the team win.