We continue our player-by-player review of the 2013-14 season with fan/coach favourite, Brandon Prust.

To say that Brandon Prust had a bad season in 2013-14 would be a pretty severe slight on the word bad. A serviceable fourth line who could gust up into the top-9 for three seasons previous, Prust was barely NHL worthy last season, and his poor play hindered the play of others at a Douglas Murray level. In fact, Prust's share of shot attempts at even strength was even worse than Murray's was, and he faced a similar level of competition.

That isn't to say he was as bad as Murray, since he played much tougher zone starts and (even if he was pretty lucky), contributed offensively at a decent clip. The problem with Prust though, is that he's supposed to be a decent defensive forward, and he was abysmal last year. Whether that was due to injuries or just poor play is difficult to tell, but either way it's not a good sign from one of the most expensive fourth liners in the NHL.

Like Moen, Prust started the season playing fantastic, then again most of the Canadiens did. It wasn't until he came back from an early season shoulder injury, always that shoulder, that his season went into the tank. It's not always as simply as straight up performance though, as just like with Moen, when Prust was injured the team without him did suffer a bit. If you watch the red line, it does drop whenever Prust goes out.

Part of the reason for that may just be whoever is playing Prust's role is also doing poorly, so it's just counting that person's play, instead of the team itself actually doing worse when he wasn't in the lineup. We'll get a better understanding of his impact when we look at how his play effected his teammates. 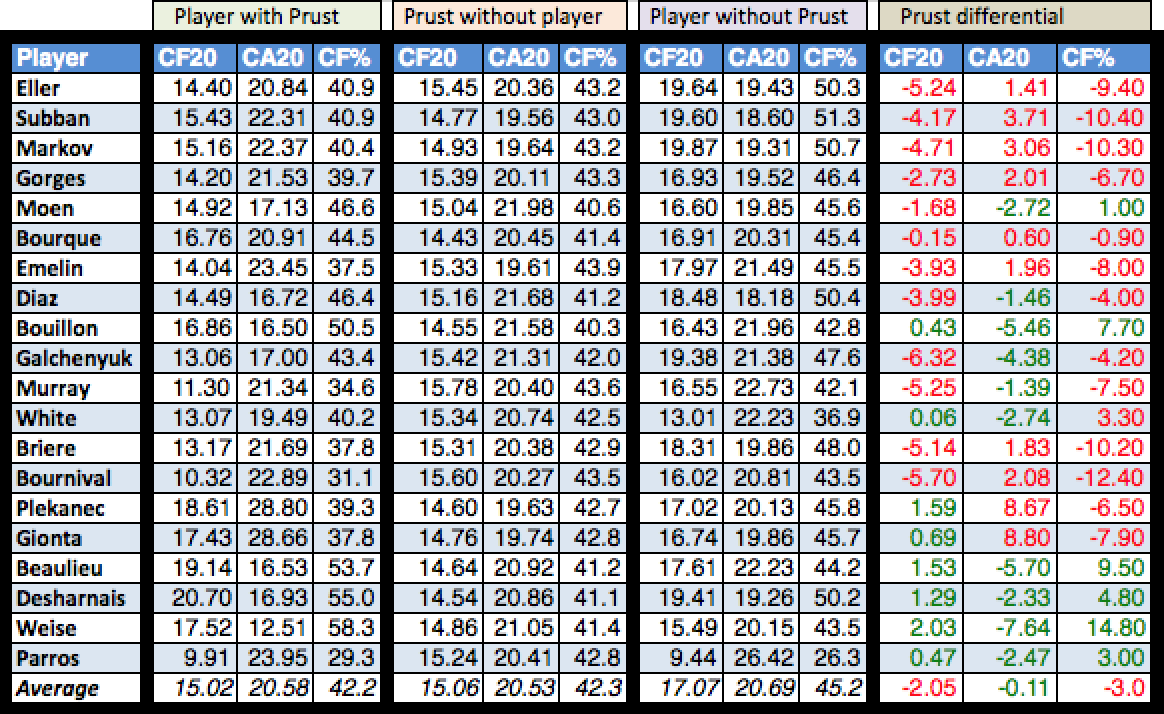 Prust isn't exactly the sea of red that Murray's WOWY was, but it's pretty bad. In general Prust had a positive impact defensively, but just slightly, and a pretty negative impact offensively and overall. The biggest problem with Prust is how much of a drag he was on the team's top players. Eller, Subban, and Markov were the players he spent the most time with, and it's extremely obvious that he hinders their effectiveness.

Same goes for the top tough minutes guys in Plekanec and Gionta, who saw more offensive zone starts with Prust and generated a bit more offensively, but were slaughtered on the defensive side of the puck. His worst impact though, may have been on the depth offensive guys like Briere and Bournival, who both saw double digit drops with Prust.

None of that is really Prust's fault though, the problem is that the coaching staff heavily overestimates his abilities as a two-way player, and he gets much more ice time within the top-9 forwards than he should (virtually none). His impact on other fourth line forwards remained positive, even if only slightly so.