Continuing our season review, it's time to go over the last time (we think) we'll see Francis Bouillon wear the Habs' colours.

As it stands, Francis Bouillon has still not been offered a contract by the Canadiens, yet they haven't explicitly said they wouldn't be bringing him back, like they did with Douglas Murray, Thomas Vanek and George Parros.

Bouillon would have been a decent depth choice for the Habs in 2013-14, however the unfortunate reality of the situation is that Michel Therrien has a penchant for overusing his buddy. The 38-year-old was a healthy scratch during 30 regular season games, and only dressed for nine post-season games. I can't fault Bouillon for his usage, that's on the coach, but I can definitely understand Bergevin's reluctance to bring him back into the fold. With Nathan Beaulieu, Jarred Tinordi, Magnus Nygren, Greg Pateryn and others knocking at the door, there's little to no space for the veteran on the Habs' blueline.

We might have to go through a Harry and the Hendersons moment between Therrien and Bouillon, but it's for the best.

Bouillon saw massive spikes in his play whenever he was paired with P.K. Subban, which is about the most unsurprising thing I've written on this site in the last week.  That's not to say that Bouillon didn't put in a yeoman's effort, everyone knows that he's one of the hardest working players in the league, but he's clearly below replacement level at this point in his career. 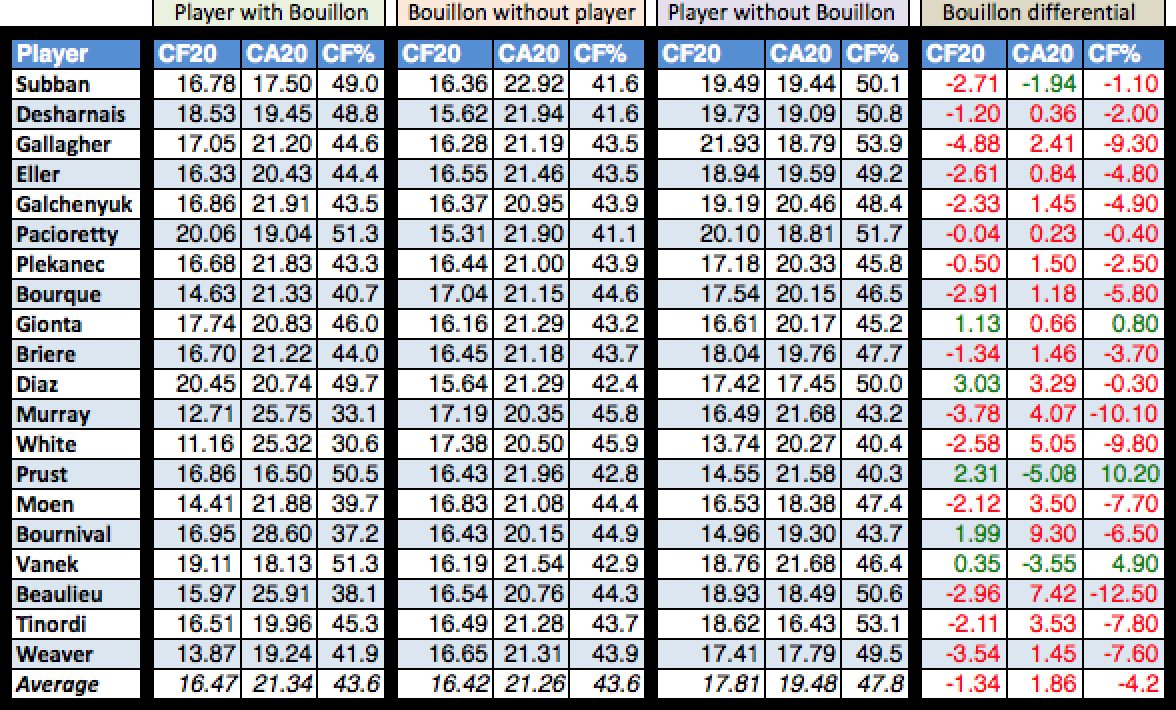 Oh, the humanity! Bouillon's WOWY chart should probably be marked NSFW, because it's gruesome. Bouillon was a drag on the vast majority of his teammates. He ended up playing over 30% of his shifts with Subban, and even that wasn't enough to pretty up his numbers. To his credit, he did spend a fair amount of the season paired with Douglas Murray, which probably gave him chest pains; it certainly did in my case.

Hopefully the Canadiens can keep him around in a front office role, because Francis Bouillon is truly one of the good guys. There's no space for him on the ice, but there's always room for another team ambassador.