As we continue through the departed Habs, here's our breakdown of Ryan White.

Despite an injury that kept him out of action for 14 games, Ryan White finished the 2013-14 campaign with 52 games played, an NHL high for the 26-year-old Manitoba native.

White was relegated to a fourth line role, meaning he started 46.8% of his shifts in the defensive zone. No other member of the 2013-14 Canadiens faced more defensive zone starts. Despite this tough assignment, White managed to put up a reasonable offensive production, to the tune of two goals and four assists. Not exactly earth shattering numbers, however considering his deployment and offensive expectations going into the season White's production could be seen as decent.

Unfortunately for White, general manager Marc Bergevin did not tender him a qualifying offer, deciding instead to rely on a gluttony of available bottom-six players that possess a higher upside. His greatest assets, hustle and relentless effort, were not enough to convince Bergevin to extend the feisty forward, and I can't say I disagree with the decison. White possesses little to no offensive upside, a history of discipline issues, and an all-around lack of skill.

White did perform admirably on the penalty kill, however with the addition of Manny Malhotra, and the always impressive short-handed play of Lars Eller and Tomas Plekanec, the Habs could definitely afford to let him walk.

As evidenced above, White was absolutely thrown to the wolves when it came to his zone deployment. While you can't expect someone to produce much offense in such tough conditions, it's hard to blame Michel Therrien when it came to White's usage. You give your offensive zone starts to your skilled players, and White was definitely at the bottom of the list when it comes to skilled Habs forwards. 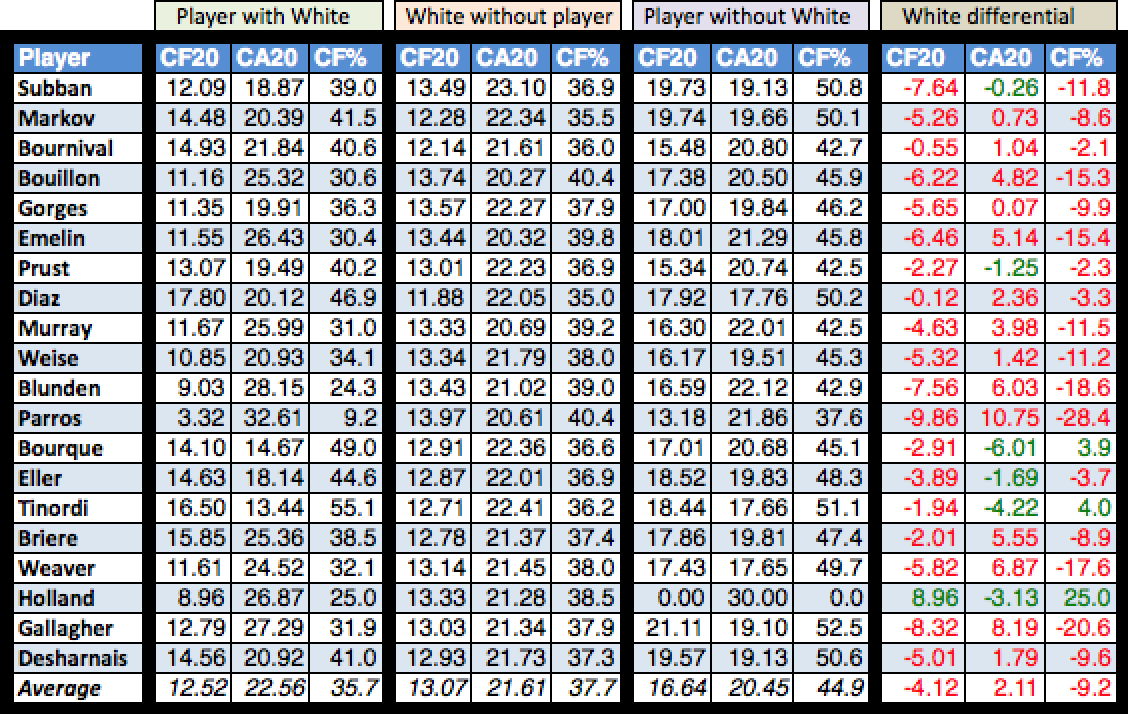 I shall dub this WOWY chart the Red Wedding, because frankly it's a slaughter scene worthy of HBO. We need to be fair; White's role was not easy by any means, but as you can see he was a drag on basically everyone that he played with this year.

A fourth line role is never easy, nor is starting the majority of your shifts in the defensive zone. However it's as clear as day that Ryan White is an easily replaceable player. He had a brutal job to do, and he did it without complaining, but I'll be relieved that his role will go to the much more reliable Manny Malhotra in 2014-15.

Mediocre hockey play aside, Ryan White did bless us with some of the most memorable gifs in recent years.