We continue along with the season reviews with a look at Daniel Briere, now with the Colorado Avalanche.

Looking at all of Daniel Briere's deployment stats in his single year in Montreal all in one place, I struggle to understand what the Canadiens thought they were buying last July. Briere is a one-dimensional offensive forward who needs to play exploitation minutes to be effective. It's one thing to give Briere middling zone starts, essentially not protecting him, but to do that while he faces the sixth highest quality of competition on the team? I just don't get it.

Remember that Therrien started out with Briere playing on a line with David Desharnais and Max Pacioretty, but when Desharnais struggled early and Pacioretty was injured, it didn't work and was never tried again. It seemed like for the rest of the season, until the playoffs, the Habs' coaching staff struggled to figure out where Briere should play.

In spite of his inefficiencies though, Briere still managed to produce as a top-nine forward last season, which is something positive for sure, even if he was nowhere close to worth his salary. The point is, the Canadiens didn't maximize his output, and that's not on Briere.

As you can see,  the Habs never really gave Briere a solid zonal push in the right direction until the 35 game mark or so, and when it didn't immediately improve his results, he lost that privilege and was back to normal duty. He got another short spike in his offensive usage towards the end of the year, which coincided with a nice bump in his performance, but plummeted right back down to earth right after. 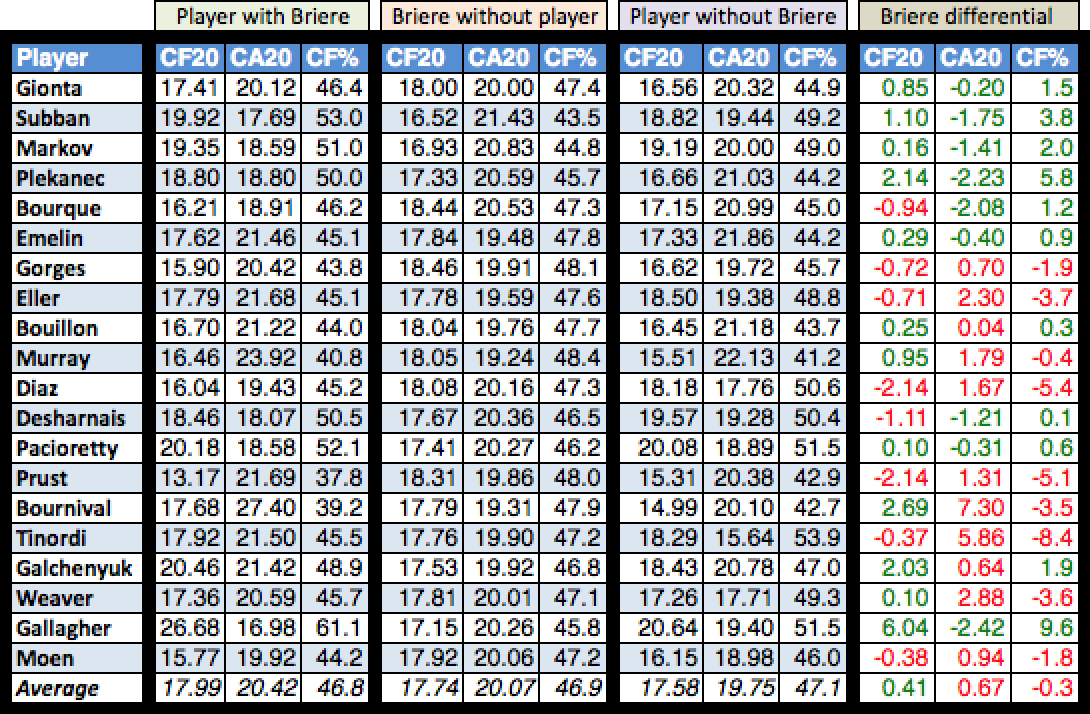 It's pretty surprising to see so much green from Briere on a WOWY chart, but that's because the chart itself lacks context. While Briere looks to have had a positive impact the Habs' top four tough minute eaters, he didn't play the crazy tough minutes that any of them did, and it's fairly likely that when he was with them, they were playing easier minutes than when they were away from him. That shouldn't erase what is a clear positive look for Briere, but it goes part of the way towards explaining it.

Briere is a weird case, because even though he was effective, because he is so limited in his versatility, he was used very little, so his overall numbers still look kinda terrible. I think the best thing you can say about Briere's short stint in Montreal is that he served a purpose. The Canadiens likely don't make the conference finals without him, but they're now better without him. Odd situation.