Olde Tyme Hockey, and is Pacioretty already as good as Lafleur?

An intriguing question, regardless of what the record books say.

Share All sharing options for: Olde Tyme Hockey, and is Pacioretty already as good as Lafleur?

Even if the only time I’ve seen him in person was not on the ice, but at a golf tournament, prime Guy Lafleur, in my opinion, embodies everything great about ice hockey. Since he is probably the most iconic Canadiens player in the color TV era, I just could not justify putting anyone else than a helmet-less Lafleur as the star forward in a hockey game of my creation. Back in the day, he skated fast, he had a great shot, and he scored a ton of goals for the Good Guys, end of the story.

All this was why I was taken aback when, a month and a half ago, Lafleur publically slammed the playoff performance of Max Pacioretty, a player who skates fast, has a great shot and who scores a ton of goals for the Good Guys. In hindsight, sure, Pacioretty could have scored more goals in the 2013-14 playoffs and sure, Lafleur was not the only person to be underwhelmed by Pacioretty’s playoff output (a respectable 5g 6a 11p in 21 games) after his regular season success (39g 21a 60p in 73 games), but the Hall of Famer’s comments reflects, what I believe, a lack of understanding of where goals come from.

As I wrote on canadiens.com in the middle of last season, a player scoring 38 goals or more in 2014 would be roughly equivalent to a 50-goal scorer back in the late 80s.  Later in the year, I also explained that even the best snipers tend to be streaky and go scoreless for extended stretches of time. Max Pacioretty shot 14.4% during the 2013-14 regular season (compared to a career average of 11.1%), but only 9.1% in the playoffs while putting the same average number of shots on net. Inconsistent effort and a lack of playoff mojo had nothing to do with Pacioretty's spring. He’s just a goal scorer like any other, and there aren't many others as good as he is.

With his track record, Lafleur, of all people, should intuitively understand the feast-or-famine nature of a sniper's game. In the five-year period between 1975 and 1980, out of forwards with at least 100 goals, he was second in the NHL in goals per game (0.70, just behind Mike Bossy’s 0.76) but was only 14th overall with a 17.5% shooting percentage.

Back then, Bossy was burying 22.8% of his shots, Gilbert Perreault, 19.6% and even the aging and injury-prone Yvan Cournoyer was still shooting 19.2%. However, Lafleur more than made up for his lower conversion rate by averaging 3.99 shots on net per game (3rd overall).

He ran the point on the League’s most-feared powerplay and had guys like Robinson, Lapointe and Savard setting him up with breakout passes, so it’s not too surprising that he never lacked for scoring opportunities. If you want to score a lot of goals, above all you need to shoot the puck a ton. Lafleur did just that for years and years, and had the silverware to back it up.

What about Pacioretty, then?

Despite his reputation as a soft, perimeter shooter, number 67 actually does just fine at getting into good position for a kill shot. Since 2010, he’s tenth overall in terms of goals per game (0.43) and 11th in shooting percentage (12.2%).

Despite not being nearly as well surrounded at Lafleur, Pacioretty ranks fifth among his peers with 3.57 shots on net per outing. Just like his predecessor, the American does alright in terms of shot quality, but really wins the day with sheer volume.

Adjusting for different eras, it seems that Lafleur and Pacioretty’s scoring abilities are really quite similar, even without taking into account that the former faced off against feckless expansion teams such as the California Golden Seals, the Kansas City Scouts or the Washington Capitals every other week, while the latter played on merely a decent team during the League’s most egalitarian era. It’s really too bad that Pacioretty was born in 1988 rather than in 1958. If that were the case, his scoring total could have given Lafleur’s a run for its money.

I had some spare time a few days ago, so I started playing around with a neat programming language called Scratch. One thing led to another and, a few hours later, I’ve put together a little game called Olde Tyme Hockey. (It plays best if you have a friend handy, but do check it out either way.) 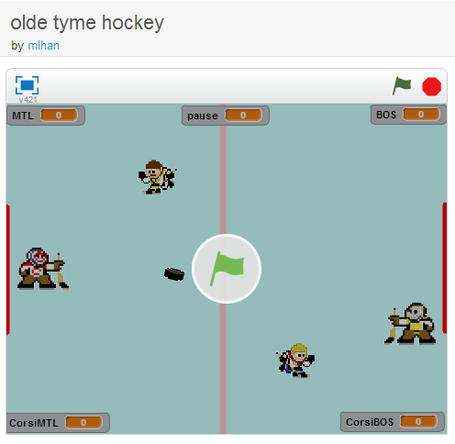 Of course, the game has to be Montreal versus Boston, Ken Dryden versus Gerry Cheevers. And when I got around to making the game 2-on-2 (the first version was just like pong), I had Rick Middleton and his Camaro ‘stache suit up for for the Bruins, and Guy Lafleur skate out at right wing for the Habs.