As we continue the season reviews, here is the low-down on Brian Gionta.

The often unappreciated captain of the Canadiens left the organization this summer, signing a lucrative deal with the basement-dwelling Sabres. Despite receiving an unreasonable amount of criticism, Gionta's departure leaves a rather large hole to fill within the organization. Not only was Gionta one of the most defensively responsible wingers, but he also contributed a large amount of production at even strength. Unfortunately, due to his age, bicep injuries and expected dip in production, Marc Bergevin could not match the offer made by the Sabres, and wisely let his captain walk. However wise this decision was, it's still a calculated risk, as Gionta's production and 200-foot play will be extremely difficult to replace.

How did Gionta's season look? Well, to begin with, he ranked in the top five in terms of even-strength shots per 60 minutes time on-ice, and goals per 60/TOI. He narrowly missed the top five in respect to assists and points as well. Simply put, Gionta was excellent when it came to his even-strength production, all while ranking first in Corsi rel QoC. He faced tough assignments and still managed to produce whilst doing so. It's worth noting that Gionta rarely got the opportunity to start his shifts in the offensive zone, as he was tasked with facing the best opponents, a job he completed extremely well alongside defensive stalwart Tomas Plekanec.

Gionta never strayed very far from the team average Fenwick %, despite his tough assignments. What we see here is that Gionta was a model of consistency, quietly performing one of the hardest jobs in the NHL, all the while putting up decent offensive numbers. His play dipped a little at the mid-way point of the season, however the vast majority of the team experienced a major dip along with Gionta. 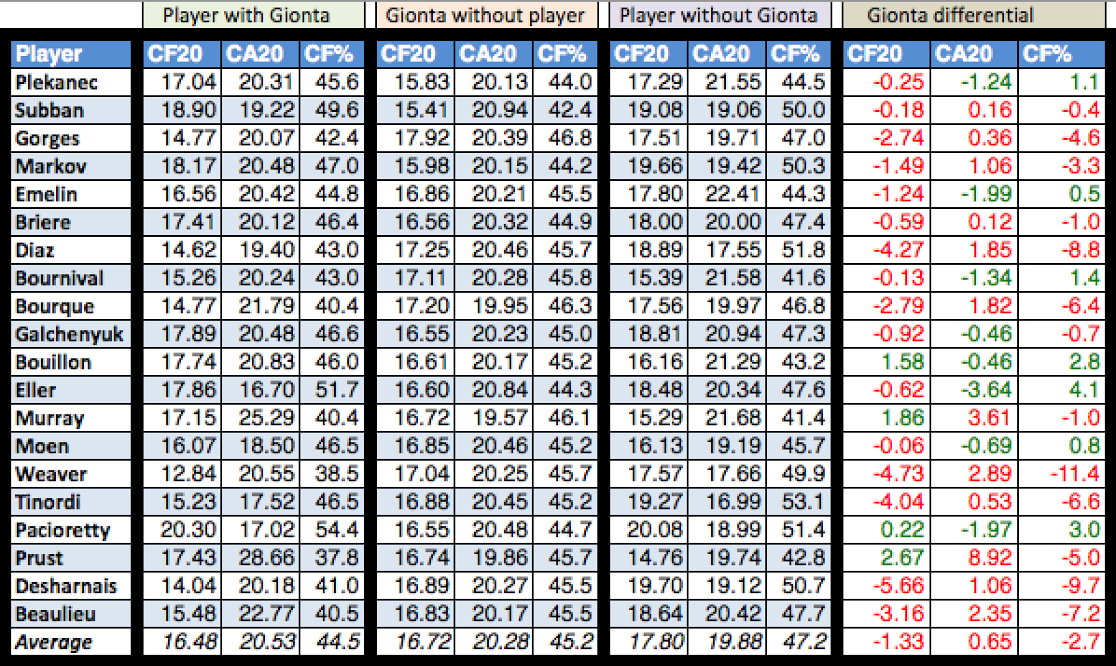 Gionta spent the majority of his ice-time as the go-to winger to Montreal's Selke center, Tomas Plekanec. Some may point to this and use the argument that Plekanec can make any winger into a defensive stud, although the reality was that Michel Therrien struggled to find another winger that could hang with the two defensively responsible veterans. I submit to you that not only did Gionta pull his own weight during the tough defensive assignments, but he is one of the rare players that makes the majority of his linemmates better, as was evidenced during the assembly of the Bourque-Eller-Gionta line in the playoffs.

Speaking of the playoffs, it's no coincidence that both Lars Eller and Rene Bourque saw a huge bump in production whilst playing with the captain. The line spent over 50% of the post-season together, and Michel Therrien reaped the rewards.

Not only was he a stabilizing factor on the line, but it gave the coach a dependable third line that also scored goals, which is essentially a dream come true for any team so late in the season. Lars Eller could arguably be described as the driving force on that line, yet the fact remains that his production saw a huge spike once Gionta was added to his line. They were arguably Montreal's most dominant line during the playoffs, and were certainly the most consistent trio.

At a quick glance, the WOWY (with you/without you) graphic presented above gives the impression that Gionta was a drag on the majority of his linemates, but as we saw with his Corsi rel QoC ranking, playing on a line with Gionta means you're facing the best players in the league, an assignment that very few hockey players can easily adapt to. The most significant number in that chart is the effect that Lars Eller had when playing with the departed captain. It seems to indicate that Eller is ready for tough assignments, however the task becomes even more complicated without the help of a winger like Gionta.

What can we take away from Gionta's season? First off, Montreal received a great season from the veteran winger. His $5M price tag has muddied the waters when casual fans speak about him, due to the perception that he should have been scoring 25 goals per year at that price tag. Truth be told, playing a responsible defensive game, coupled with a reasonable offensive production was a major asset for the Canadiens, and one that will be very tough to replace.

No matter how you slice it, Gionta was very important to the success of this team, and the young players will have no choice but to step up their game if the Canadiens hope to fill the massive void internally.