To start the season review, we're going to go over the players the Canadiens moved on from, next up is Josh Gorges.

The trade of Josh Gorges is probably the most shocking thing to happen in regards to the Montreal Canadiens so far this summer. Considered a leader in the locker room and a long-time top-four option on defense, moving Gorges for a second rounder was the last thing on most people's minds. Yet in doing so, Marc Bergevin opened up a spot on the left side for a prospect, shifted Alexei Emelin back to the left, and used the open cap space to sign a possibly better player in Tom Gilbert, for less money.

Gorges did his usual thing in 2013-14: he played tough minutes, with fairly tough zonal deployment, without really tipping the scales offensively. He had a pretty brutal season when it comes to possession, which is surprising considering his defense partner for most of the year was P.K. Subban.

Even though Gorges was a relatively poor possession player, he still outperformed his zone starts for most of the season, and had some great on-ice percentages swing his way, leading to a great goal differential.

For the first time in awhile, Gorges actually missed games in 2013-14, breaking his iron man streak at 198 games. Considering the physical nature of the game Gorges plays, suffering an injury may have been a factor in why Marc Bergevin decided to move on. Players like Gorges with limited offense tend to break down quite quickly after the age of 30. Add to that the possibility of finding a better fit for the team at a better price, and you can see Bergevin's logic pretty clearly. There's only so much that being good in the room can overcome.

While Gorges does play tough competition, he also had one of the higher quality of teammates scores on the Canadiens in 2013-14, and he didn't play the toughest zonal deployment on the team either, so considering that, it's not a good look that Gorges is a consistent drag on his linemates. Taking a look at his WOWYs with teammates he spent more than 30 minutes with, it's kinda ugly. 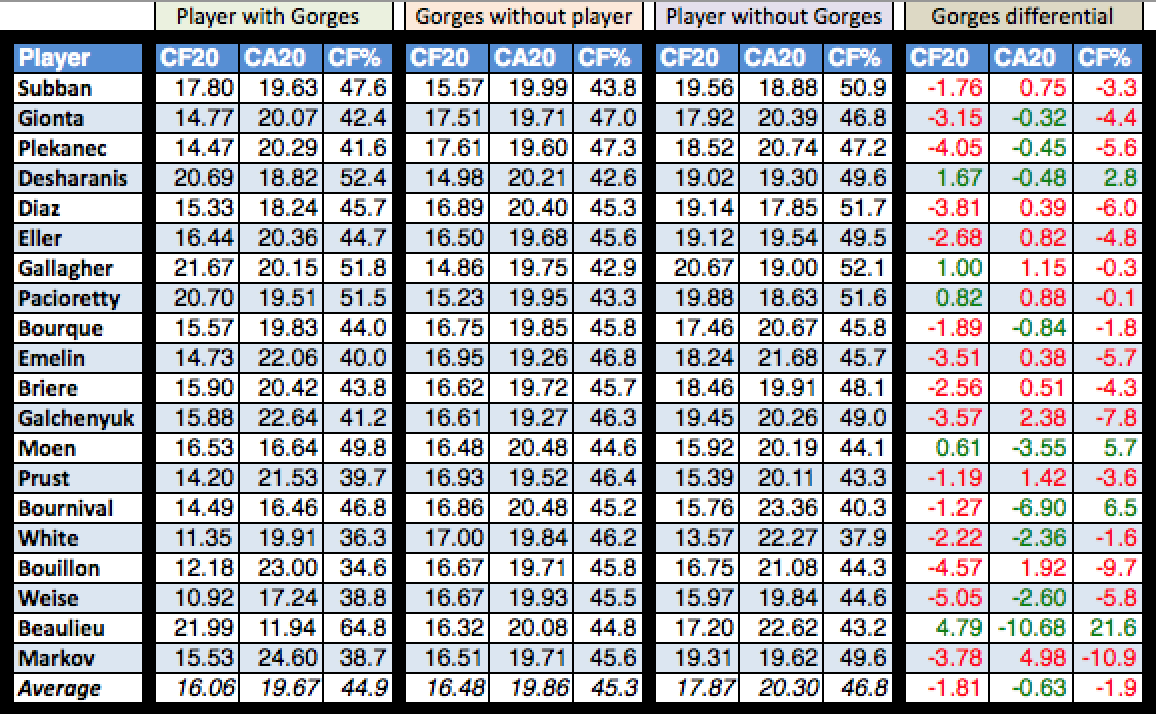 While Gorges' average doesn't look too bad, remember that this isn't weighted by ice time. If you ignore Beaulieu, who Gorges didn't spend much time with, the average Gorges dragged his partners down by jumps from 1.9 percentage points to 3.1.

Most interestly, Gorges was a huge drag on Brian Gionta and Tomas Plekanec in tough minutes, which suggests that he wasn't capable of playing those minutes, which has been his bread and butter the last several seasons.

The only player to play significant minutes with Gorges and see a jump in their play was David Desharnais, but based on usage, I'm guessing the reason for this is most likely due to having lots of offensive zone starts with that line, and playing with P.K. Subban.

Gorges did see an overall reduction in shot attempts allowed while he was on the ice, but his limitations offensively are his downfall. This comes back to something we've been discussing all year at Eyes on the Prize, that defense-only defensemen are usually overvalued commodities. In actual fact, puck-moving defensemen are usually better overall defenders, even if they once-in-awhile have a gaffe that makes the highlight reels. Those gaffes are worth putting up with because the overall flow of shots on each team's net is still going to end up in a net positive.

Gorges can be good defensively and reduce shots against, but unless he tips the scales defensively a gargantuan amount, he's always going to be a net negative due to a lack of offensive prowess.