Never mind that the Canadiens traded from a position of strength to address a position of weakness, this trade is a win based on talent alone.

It's not often that you can say that a team wins a trade from all possible angles, but from where we are right now, it sure seems like Montreal Canadiens GM Marc Bergevin has accomplished exactly that. By trading soon-to-be 37-year-old Daniel Briere and his $4M contract to the Colorado Avalanche in exchange for P.A. Parenteau and a fifth round pick, Bergevin has managed to get younger, bigger, more talented, fill a position of need from a position of strength, not wasted a dime of cap space, and added for the future, as negligible as a fifth rounder may be.

And, in dealing for a talented player who grew up in Quebec, who actually has some gas left in the tank, Bergevin won from a public relations perspective as well.

The only negative note surrounding the deal for Montreal is that they took on an extra year of term, but for a player who is six years younger, that's really not a bad thing.

How do they match up?

Back in January we took a look at how good P.A. Parenteau is.

Parenteau and Briere have played fairly similar roles over the past few seasons. Both are exploitation line guys, both aren't exactly fast anymore from a footspeed perspective, but that's where the comparison ends.

Over the past two seasons, Briere ranked 227th of 293 forwards to play 1000 or more minutes at five-on-five in points per 60 minutes played, while Parenteau ranked an astounding 52nd. That essentially marks Parenteau as a top line point producer in the NHL, but that's not all. 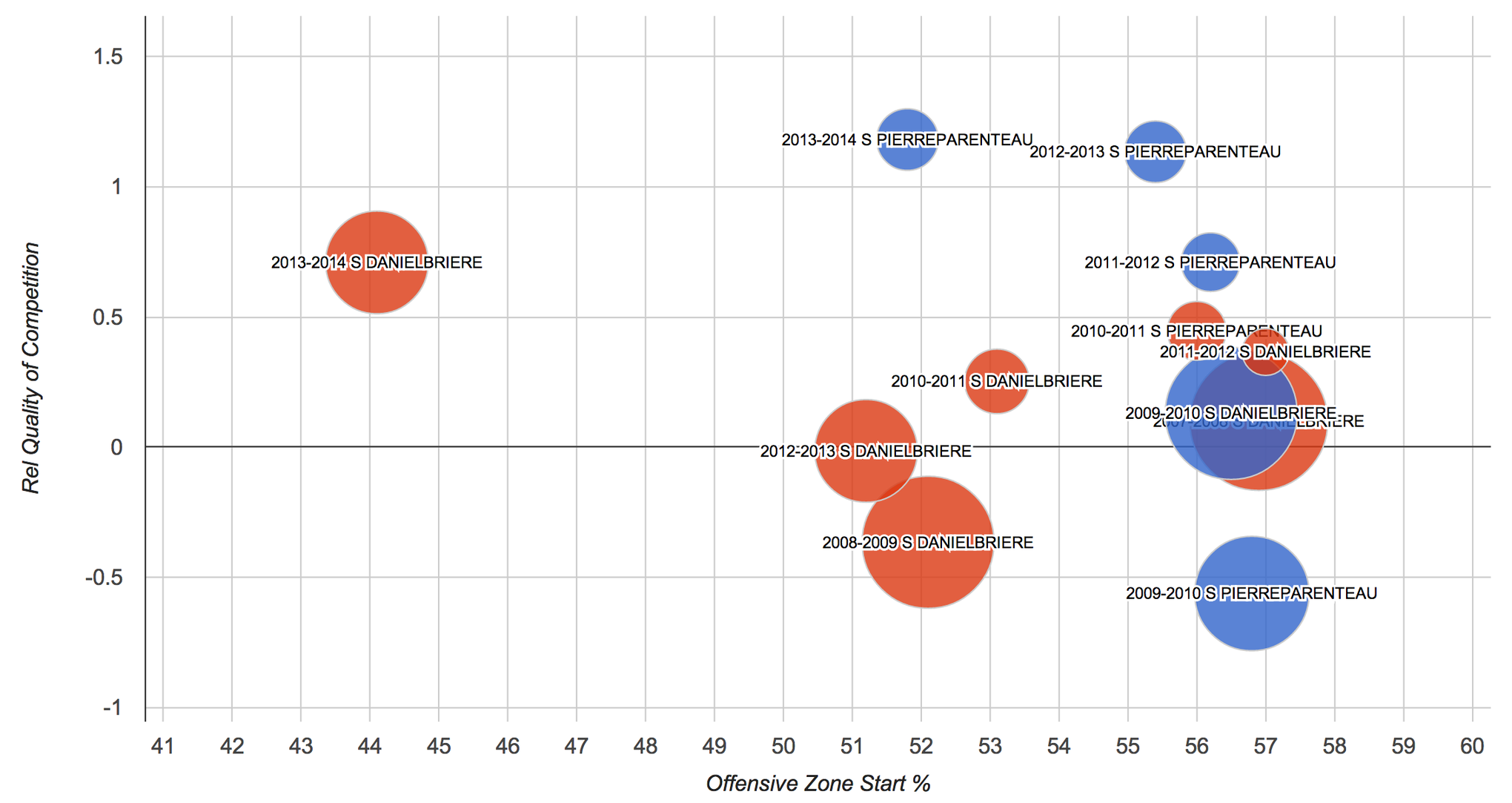 Using a player usage chart to compare them, we can see that Parenteau plays against tougher competition, while Briere has played tougher zone starts in a few years, but always against easy opponents. We can also see that Briere has only once since the 07-08 season produced a positive Corsi differential relative to his teammates, whereas Parenteau has been positive for the last three straight years, and four of the last five.

Parenteau isn't exactly a possession driver per say, but he is a complimentary player instead of a drag on his linemates like Briere is.

Dealing from a position of strength

As we have noted many times, the Canadiens have tons of depth at center, but are very thin at right wing. Not only is Parenteau a huge upgrade on a strictly talent basis, it also makes more sense for the team Bergevin is building. He still has just as much money to play with in free agency, and if he adds another right wing, it allows him to be careful with prospects like Sven Andrighetto, and develop them slowly.

There is not much not to love about this deal.