The Canadiens have spots to fill this summer, and decisions to make

The Montreal Canadiens face several big questions heading into the offseason if they want to improve their team going into the 2014-15 season.

Share All sharing options for: The Canadiens have spots to fill this summer, and decisions to make

Every offseason, hockey teams are faced with difficult decisions about what to do with their roster going forward, but the Montreal Canadiens are in a unique situation in that they're on the precipice of being real contenders if this summer plays out the right way.

They will have to make several decisions quickly though. 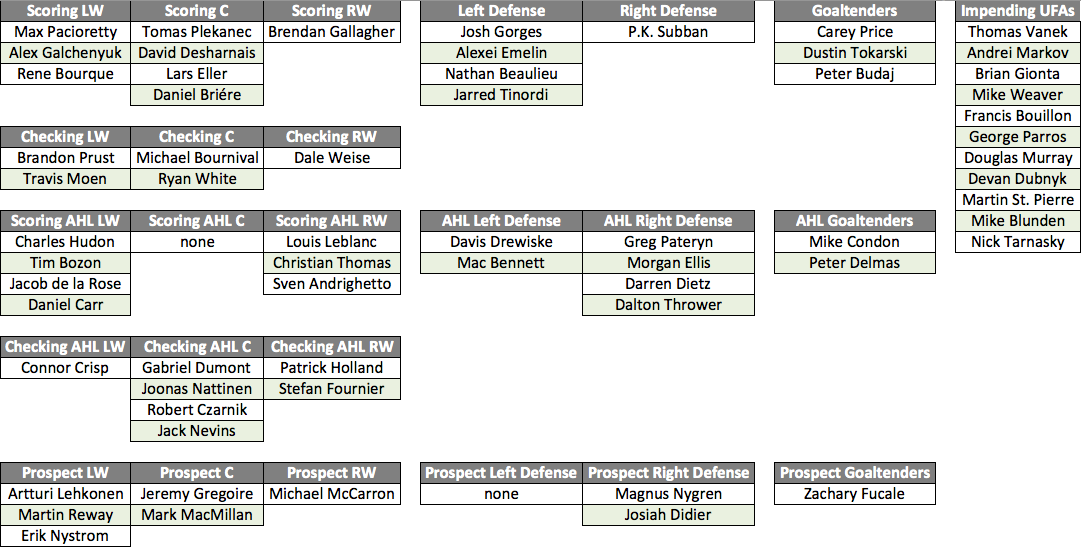 As is obvious from the organizational depth chart above, the Canadiens have two obvious holes in their NHL lineup at right defense, and right wing. They also have a glut of talent at the center position, especially when you account for 20-year-old Alex Galchenyuk, who looks ready for more responsibility.

The most important signings the Canadiens will make this summer are undoubtedly P.K. Subban and Andrei Markov, but those are almost easy decisions to make. What's discussion-worthy about those two players is what they will cost against the cap, which is important when looking at filling holes.

The salary cap is expected to rise to $71.1M for this coming season, which gives the Canadiens $26,451,667 in space, along with a $3,257,500 bonus cushion. Montreal will almost assuredly move Peter Budaj and promote Dustin Tokarski during the summer, which would save them an additional $837.5K against the cap, bringing them to $27,288,167 in space. Teams rarely push into their bonus cushion in the summer, and the Canadiens are notoriously savvy with saving that remaining cap space during the season, so let's assume they won't go over the $27,288,167 immediately available to them.

Liberally accounting for Subban and Markov, about $15M of that space is immediately eaten up, with the Canadiens still needing to sign restricted free agents in Lars Eller, Dale Weise, and possibly Ryan White. Assuming $5M more gets split between those three, and you're already down to $7,288,176 in cap space with two holes on right wing, and two on right defense.

Decisions to be made

Where does Emelin fit?

This might be the most important decision the Canadiens make this summer. If the Habs are content to continue forcing Emelin to play on the right side with Markov, they're going to need to significantly upgrade their third pairing and begin to shelter that pairing, because they can't be successful in tough minutes.

The problem is that eventually the Canadiens need to begin to break in Nathan Beaulieu and Jarred Tinordi at the NHL level, so with Josh Gorges and Andrei Markov already there, Emelin doesn't really have a spot on the left either. Considering that Markov is far superior, and that Emelin is one of the few players who is significantly worse when playing with Subban, the fact is, a top-4 spot for Emelin looks out of the question, which makes him obscenely overpaid at $4.1M per year.

The Habs could take the hit on the third pairing if they drop salary elsewhere, but this is something they need to figure out as soon as possible.

Patience or payment for the second pairing?

With several key free agents, two seemingly NHL-ready players in the final year of their respective Entry Level Contracts, and only a pair of defenders under multi-year contracts, the Habs' defensive corps is in for quite the interesting off-season.

That right defense hole on the second pairing is troubling. It's easily the the most important issue to address this summer for the Canadiens, but they may end up not filling it for a second straight summer due to prospects like Greg Pateryn and Magnus Nygren looking for spots. Neither of those players look to be ready for top-4 level minutes, but a player like Mike Weaver could provide enough of a stopgap measure if one of those two truly breaks out, but the team isn't likely to get better going that route.

Should Galchenyuk move to center?

From the start of his career, the guy I've been comparing Galchenyuk to is Tyler Seguin. Galchenyuk had a far superior rookie year, but absent the increase in responsibility and great linemates that Seguin saw in his second season, Galchenyuk struggled at times, partly due to injury.

Seguin moved to center after three seasons at right wing, including two deep playoff runs that earned him a wealth of experience. Galchenyuk has played just a season and a bit, with 116 regular season games to his name, and is the highest scoring player in his draft year, which suggests that his development hasn't been hurt.

While it's tempting to explore moving one of the Canadiens' centers and putting Galchenyuk in their position, that decision would immediately make them weak at left wing, and depending on who is moved to make room, the team may not see a huge benefit from it. A full season playing tough minutes on the wing may be what's necessary for Galchenyuk to make a smooth transition to center like Seguin did this past year.

Should the Habs bring back Gionta?

What should the Habs do with Gionta?

Fans are split down the middle when it comes to the Brian Gionta situation, but the solution seems to be as clear as day.

What should the Habs do with Gionta?

Possibly the toughest decision the Canadiens face in the summer in terms of Marc Bergevin's personal decision making. Bergevin has made it beyond clear that he loves what Brian Gionta brings to the team, absorbing tough defensive minutes and top end assignments while still continuing to push towards 20 goals and a half point per game. Gionta is no longer a game breaker, but will be unlikely to be paid as one on his next contract.

The Canadiens are low on wingers with two way ability, with Gionta being the only established one on the roster, but he's also 35 years old and there is always risk in signing someone that age, especially when there are possibly better players available on the market.

Gionta will likely come at a discount, and the Canadiens need to add at right wing, but if they would rather go the free agency route, more offense could likely be had.

Can a forward prospect make an impact?

Even if the Habs sign Gionta, they will need to rely on at least one prospect right-winger to make an impact. Last season Michael Bournival was a surprisingly effective rookie for Montreal, though he didn't bring a ton of offense. The season before, Alex Galchenyuk and Brendan Gallagher both surprised and not only made the team, but contributed at extremely high levels. For the Canadiens to continue improving, they need someone else to make the jump, unless they shed major salary.

This is a do-or-die season for both Louis Leblanc and Christian Thomas, the two players need to show that they have what it takes to be NHL regulars if they want to ever make it. However those two have been surpassed on the depth chart by the younger, and more offensively dynamic Sven Andrighetto. With Gallagher taking Gionta's spot as the top right wing, Andrighetto could move into Gallagher's spot as the exploitation winger.

Even if everything works out for the Habs, there is a very good chance that they need to dip into free agency in order to improve the roster.