Canadiens vs Bruins game 4 recap: Close, but no cigar

Montreal drops game 4 in overtime, after a solid performance on home ice.

Share All sharing options for: Canadiens vs Bruins game 4 recap: Close, but no cigar

Montreal put forth their best effort of the series, but it wasn't enough as Matt Fraser won the game in overtime thanks to a garbage goal. First of all let's get the Murray issue out of the way. He is terrible, there's no doubt about it. He's always out of position, decides to take way too many ill-advised pinches, and his top speed is matched by the planet's continental drift. He ranks in the bottom of the league in terms of possession in the playoffs, and Montreal is almost always pinned in their own zone when he's on the ice.

That being said, it's unfair to pin the loss solely on Douglas Murray. Last time I checked you don't win many games without scoring a goal. A few people have pointed out that you shouldn't have your third pairing out in overtime, however I assume that Therrien was attempting to capitalize on the Bruins third line being on the ice.

Mike Weaver did a great job trying to compensate for Murray's lack of mobility, yet it was clear from the get-go that this strategy was unlikely to be sustainable. To add to the third pairing's woes, they were charged with a plethora of defensive zone starts, partly due to their penchant for icing the puck. Boston exploited the pairing all night long.

In short, the third pairing was a disaster, and the eye test confirms that it was not Mike Weaver's fault.

If the coach is not ready to trust the rookies, which he probably isn't, it would be wise to at least slot Bouillon over Murray for game 5, seeing as Bouillon possesses superior hockey skills in almost every single aspect that's important to winning games. Unfortunately Montreal is stuck in a 'lesser of two evils' scenario when it comes to the #6 defenceman.

Montreal's first pairing continue to dominate, as Subban and Gorges completely shut down Boston's first line, and in case you haven't noticed both David Krejci and Brad Marchand are still searching for their first goal in the 2014 playoffs. Subban is a man on a mission, and is not only creating a feast of scoring chances, but he's playing great defence as well.

As per usual, his passing was top notch:

Montreal's best chance at scoring goals in this series continues to come off the stretch pass, by exploiting Boston's lack of mobility on the blue line.

The main difference last night was that Tuukka Rask shut the door every time Montreal managed to produce a decent scoring chance.

Rene Bourque and Brian Gionta had top-notch scoring chances, but Rask denied the Habs forwards on both occasions. Rask had an excellent game, and the Bruins did a good job preventing Montreal from pouncing on the few rebound chances Rask gave up.

It's the type of shot that Pacioretty would have no problem putting in the net during the regular season, but as everyone knows luck is a very real factor in hockey, and Pacioretty simply isn't getting much puck luck right now.

Carey Price continues to be Carey Price. What else can be said? He gives Montreal a fighting chance every single night. You can't ask for much more from your goaltender in the playoffs. Since the Bruins figured out how to score on Price, they have three goals on 63 shots. Two deflections and one garbage goal.

What needs to be done?

Other than replacing the worst possession player on the team, Montreal's best offensive players need to start producing. Thomas Vanek had one of his worst games as a Hab last night, as did Tomas Plekanec. I know it's much easier said than done, especially when the opponents have players like Zdeno Chara and Patrice Bergeron, but eventually the excuses run out and you need to see even strength goals from the likes of Pacioretty and Vanek.

Montreal is no longer getting slaughtered in terms of possession, but it's clear the numbers still leave a lot to be desired. 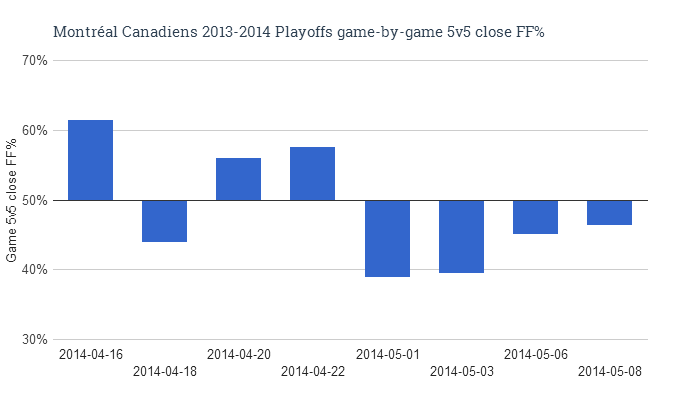 As it stands, the Habs could use an injection of creativity and skill in the lineup, and there's one man currently injured who could bring a heavy dose of talent to the roster, however Alex Galchenyuk still hasn't practiced with the team, so we'd be wise not to put our hopes up for a return in the final three games.

Montreal now faces a tough situation, heading back to Boston to play a best of three in which the Bruins will control the last change twice. Julien has done a great job exploiting Montreal's weaknesses when it comes to line matching, so expect the trend to continue at TD Garden.

Is it time to panic?

Absolutely not. With Carey Price in fine form Montreal will have a fighting chance at taking home the series, even if Boston controls home ice. Boston may have controlled the puck more often than Montreal in last night's game, but the eye test suggests that the Habs actually had a few more quality scoring chances. Tuukka Rask had a great game, which is abnormal considering he's usually hot garbage versus Montreal.

If the Habs put forth another strong effort like they did last night, and tweak the glaring roster selection error, they'll be in a good position to take home the series.  It won't be easy, but it can be done.

Although to be perfectly honest, if you would have told me a few months ago that the Habs would be two wins away from the Conference Finals I would have laughed.  Montreal has already exceeded my expectations by leaps and bounds, thanks to great efforts from Carey Price and P.K. Subban.

As an aside, I just wanted to point out that was one of the best 0-0 regulation games I have watched all year. On a scale of one to Maurice Richard, Habs/Bruins playoff hockey is an  11.