Canadiens vs Rangers recap: The little team that could

Everyone bet against them, everyone always does, but the Montreal Canadiens showed what they were made of this season, and a bright future is ahead of them.

Share All sharing options for: Canadiens vs Rangers recap: The little team that could

To end their season, the Montreal Canadiens were held to just 18 shots, 13 at even strength, and only four scoring chances at Madison Square Garden. They looked nervous, tentative, and tired in a game they were never really in, even though the game ended just 1-0. Michel Therrien commented after the loss that the Rangers played a perfect game defensively, he was right.

There will be many among you who will be tempted to be upset about this poor effort to end the season. Don't be.

A long and winding road 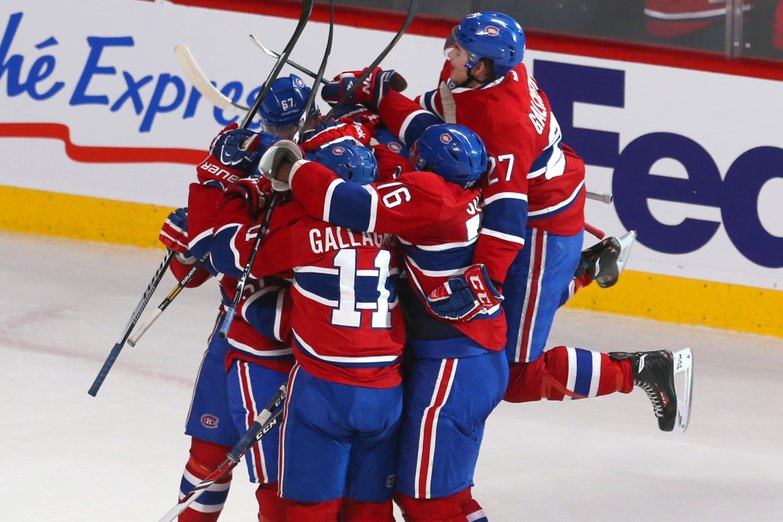 On the heels of a deflating defeat, it's easy to lose your bearings. Remember where the Canadiens were this season, a good roster that continually struggled to beat inferior teams. They were a team that outplayed their opponents just seven times in 34 games from November 30th to February 26th.

They were a team that through the regular season, saw every regular on the roster have a worse season than the previous one, save Andrei Markov, who finally looked completely comfortable on his surgically repaired knee.

It was a team that until March 15th, couldn't seem to fully get it together. Then, down 4-1 to the Ottawa Senators in spite of clearly outplaying them, something happened. While the Eyes on the Prize summit was taking place in the Montreal Hockey Talk studio, the much maligned, slumping, Lars Eller completed what looked like a nothing play to bring the Canadiens within two goals, with just 3:12 to play.

The response was tepid from fans, until Brian Gionta fed P.K. Subban at the point, then tipped home a goal to bring the game within one, with 2:04 remaining.

As the second wound down, the Sens were under siege, and Subban showed poise almost no one could imagine, passing up a shooting opportunity to find an open David Desharnais, who beat a sprawling Lehner to tie the game with under a second remaining.

When Francis Bouillon of all people scored the winning goal just 1:26 into overtime, you could tell that there was something special that just happened with this team. The Habs went 11-3-1 from there to the end of the season. 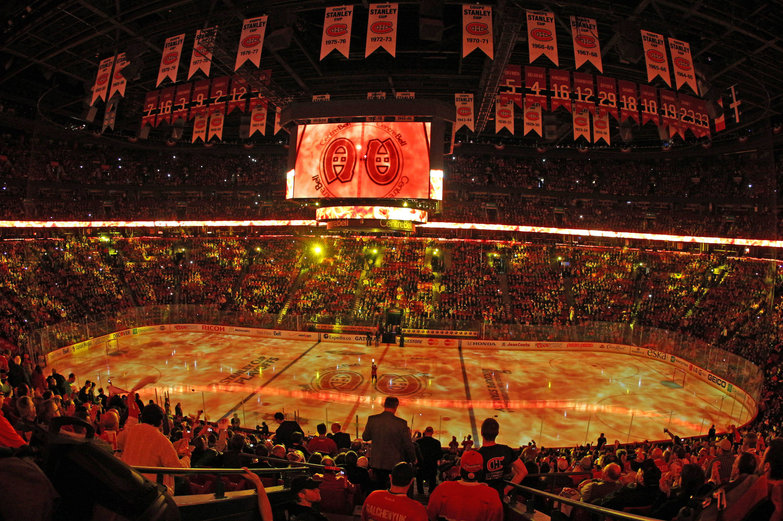 Coming into the playoffs, even as hot as they were in the win column, there wasn't a lot of confidence in the Montreal Canadiens. They were lucky that Tampa Bay Lightning starting goaltender Ben Bishop was out with an injury in the first round, but the consensus going in was that Tampa Bay was the better possession team, and better coached, meaning that it would still be tight, even without Bishop. I was negative about it too, but what we got wasn't what we expected.

Right out of the gate, the Canadiens stomped the Lightning into the ground. They outpossessed them, they severely outchanced them, they outplayed them, and they swept them.

Rene Bourque went from potential buyout candidate to superstar in the period of two games. The Canadiens outplayed the Lightning so severely that although it likely wouldn't have been a sweep, Ben Bishop's presence may not have mattered at all.

Shipping up to Boston

Sure, the Canadiens beat up on a hurting Lightning squad, but the second round would be another story. The Presidents' Trophy winning Boston Bruins were arguably the best team in the NHL, and so the calls rang out; "Boston in three". 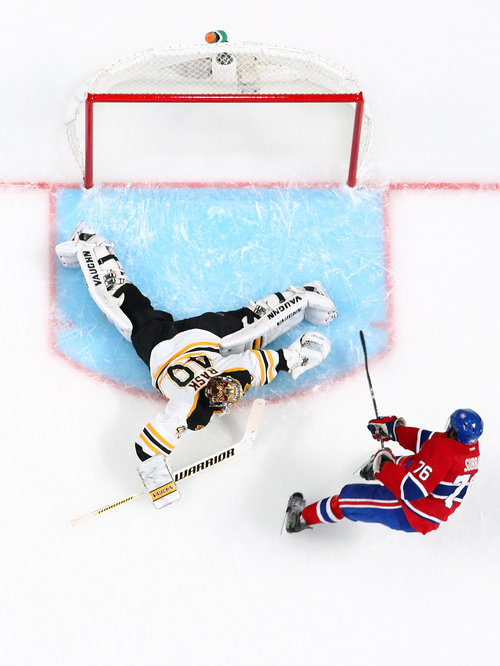 15 different RDS analysts all chose Boston to win the series. The smart money was on Boston. Not only were they a better roster, but they were better coached, and unlike the Lightning, they boasted their healthy starting goaltender, the frontrunner for the Vezina Trophy, the best goaltender in the world, Tuukka Rask.

There was one problem though, the actual best goaltender in the world was standing between the pipes at the other end of the ice. From the outset Carey Price was phenomenal. More than that, he was sensational. And he had to be, as the Bruins took it to the Canadiens in the first two games, but thanks to Price and Subban, the Canadiens still managed the split in Boston.

Back in Montreal, The Habs shifted things in their favour, playing one of the most emotionally charged games of the season en route to a 4-2 victory, including the goal of Subban's young career. But the Bruins are still the Bruins, and they took the next two games.

Again, all seemed to lose faith. Icing Douglas Murray three straight games had proved to be a near fatal flaw, and the Bruins don't let teams up off the mat. But as they had been doing for awhile now, the Canadiens found a way. Enter Nathan Beaulieu, whose first professional level playoff game would be an elimination game against Monreal's ancient rivals. The result was Beaulieu springing Max Pacioretty for his first goal of the series, and a 4-0 shutout win that rocked the Bell Centre to its foundations.

Game 7 loomed, the greatest of hockey moments. A confident P.K. Subban proclaimed that he couldn't wait to feel the energy in the arena in Boston, and take it all away from them. It was bold, and it took all of 2:18 into the first period for it to happen. A 3-1 victory later, with Max Pacioretty's second straight series-winning goal, and the Bruins were staying home while the Canadiens moved on to the conference finals.

No quit in this team 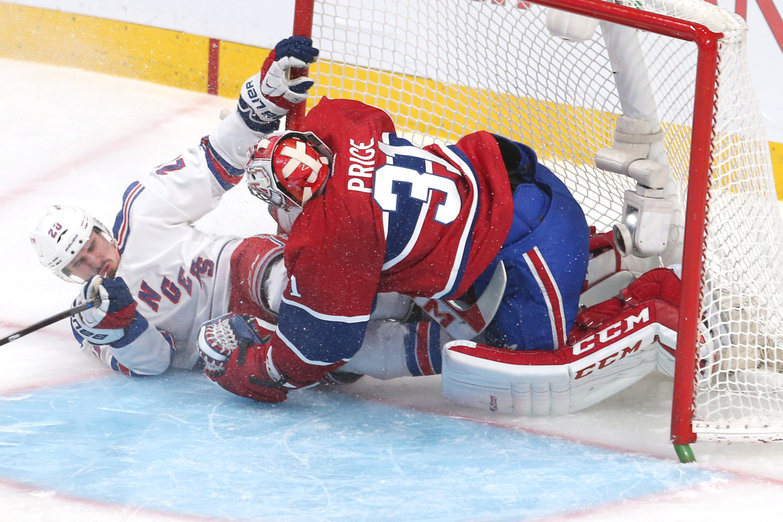 Coming into the Eastern Conference finals, people were finally beginning to believe in the Canadiens. You had two teams that on paper were relatively equal. Deep at forward, both lead by a star defenseman drafted by Montreal in 2007, and both backstopped by incredible goaltenders who were snubbed in Vezina voting.

Everything looked pretty equal until the puck dropped, when a Canadiens team due for an emotional letdown suffered exactly that, getting blitzed early. However the Habs regained their composure, and came out fighting in the second period. Scored a goal, and had themselves back in it. Then Chris Kreider crashed the crease with reckless abandon and a little help from Alexei Emelin, and everything came tumbling down.

It would have been so easy to quit. The MVP of the Canadiens season, the man who stole the series against Boston, was done for the series. Not many people would blame the Canadiens for folding under that situation, but they didn't fold.

Michel Therrien made the extremely bold, extremely risky choice to play Dustin Tokarski instead of Peter Budaj in goal, and his gamble paid off, with Tokarski putting up a respectable .916 save percentage, and a 2-3 record in his first exposure to the NHL playoffs.

"We thought we lined up better against them than Boston and that's what makes this all frustrating. We play our hearts out for two series and then have a little bit of a letdown in this series and then it's too late." -Max Pacioretty

Tokarski gave the Canadiens everything that could possibly be expected of him and more, but even with that, he's just not Carey Price, and he couldn't quite match Henrik Lundqvist at the other end. You can't blame Tokarski for the Canadiens losing the series in any way, he performed beyond expectations, but again, he isn't Carey Price.

This is a distinction that's lost on many, but the margin for error in the playoffs is so slight. One mistake can end your season, and with the way Price was playing, you know there wouldn't have been many mistakes.

Going out with an asterisk like losing your starting goaltender is always going to be tough to take, but you have to account for what the Canadiens accomplished this season, especially given expectations. They're one of just three Eastern Conference teams to make the conference final twice in the last five seasons. They eliminated the best team in the NHL. They took the New York Rangers to six games without their biggest piece. They had their best playoffs since 1993.

They had this much success, with the smallest team they've had in years. That's right, all that talk about the Habs being bigger this season? Total media spin. It's almost like being good at hockey is more important than being a big body.