Canadiens on the brink

It's been the story of the series, as the Canadiens were burned by their ineffective breakouts and lost a winnable game against the Rangers.

Share All sharing options for: Canadiens on the brink Often times when coaches, media, and fans focus on special teams as the source of success or failure, they're focusing on the fringes of the game while the majority of the time it's decided at even strength. That isn't the case of Sunday evening's game between the Montreal Canadiens and New York Rangers.

"It was us. It was us. They were penalties. You can't do that." -Alain Vigneault

Alain Vigneault said after the game that eight calls against his team were legitimate calls, and blamed his own players for not being disciplined. It was a breath of fresh air in a series that has been turning a little Bostonian in its idiocy.

The problem for Montreal was that they completely wasted those powerplays outside of one, a P.K. Subban blast that may have deflected off of Brendan Gallagher to beat Henrik Lundqvist.

In 14.6 minutes of powerplay time, the Canadiens managed just eight shots on goal, gave up four against, including two breakaways, and a goal against. Pathetic.

You have to give the Rangers coaching staff and players credit for what they were able to accomplish while down a man for so long, but in the end when you have 14.6 minutes of powerplay time, you're supposed to, you know, have the advantage. Both the Canadiens players and coaching staff should be embarrassed with that powerplay performance, and given how long they had to work on it in the game, it's unthinkable that no adjustments were made.

Not everything is negative right now, there are bright spots, but you're going to have to bear with me on this and slog through some criticisms of the Canadiens because they're obvious and legitimate. No one can take anything away from what the Habs have accomplished. They've defeated the best team in the league, and made the conference finals for the second time in five years, but there are serious problems that could be addressed and make them a better team.

The Canadiens' zone exits have been a problem all season, and while that problem seemed to go away in the four game sweep of Tampa Bay, they resurfaced in a big way against Boston. The Canadiens have zero creativity exiting their own zone. They have one mode, up the wall or bust. Teams anticipate it and block the chips up the wall, and even if the Canadiens are lucky and get the puck right back, nine times out of ten they go right back up the wall and either get the chip blocked again, or get frustrated and ice the puck.

Watch the way the Rangers and Bruins handle the puck in their own zone, passing it around, supporting the puck with good positioning, skating it out, or making breakout passes. This is what good teams do. They don't repeatedly smack it up the wall even when it doesn't work.

This burned them on the Martin St. Louis overtime goal, by the way.

Still coming back from an injury, missed training camp, blah blah blah, it's excuses. Emelin's problem isn't a lack of mobility, it's a lack of hockey sense. Put the puck on Emelin's stick and he's a reasonably competent player. Have a guy crossing the blueline with his head down and he'll make a big hit. Have any reasonably intelligent player coming at him with speed, he's a turnstile. What's worse, is that Therrien is playing him on his off side in tough minutes, with another defenseman with mobility issues.

Andrei Markov and Emelin were a good pairing for a very short time in the lockout shortened 2013 season, and have been atrocious now for about 70 games. This is obvious to anyone who can break down plays, and there has to be someone, anyone, within the Canadiens organization who can point this out and make an adjustment. It's not like the Canadiens are lacking in options for defensemen. 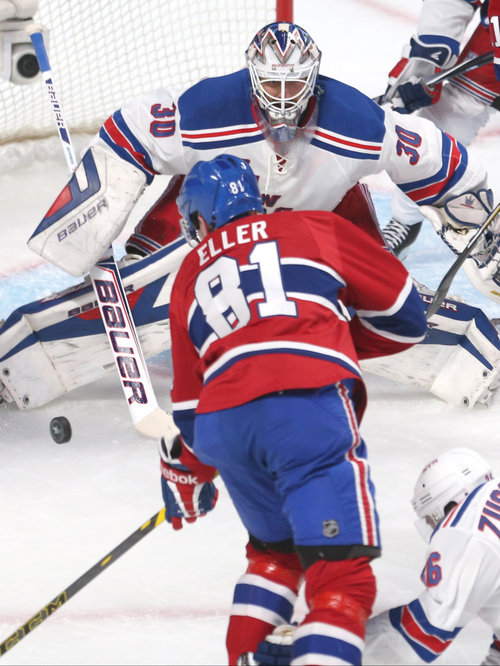 In case you haven't noticed, while everyone is heaping praise on David Desharnais for his improved two-way play (which is deserved), Lars Eller is the Canadiens' highest scoring forward in the playoffs. He's accomplished that while playing with linemates who've been ice cold since the first round of the playoffs, in tough defensive minutes. He starts a whopping 43.8% of his faceoffs in the defensive zone, the highest number of any forward on the Canadiens, along with just 25.8% of his shifts in the offensive zone, the fourth least among Canadiens forwards.

This is in contrast to Desharnais, who starts 23% of his shifts in the defensive zone (2nd least), and 39.1% of his shifts in offensive zone (2nd most). Eller is also getting just 19 seconds of powerplay time per game, to Desharnais' 3:21. Yet Eller has 11 points to Desharnais' 7 (6 when they finally switch Subban's goal to Gallagher). We can all agree that Desharnais is playing well, but Eller has been the Canadiens' best forward in the playoffs, and you're not going to win when you're playing him on the fourth line.

Thomas Vanek has to wake up

Obvious point is obvious. Thomas Vanek might be injured. He might not be. He probably is. Honestly though, it doesn't matter. Being injured can force you into making some bad plays. I'm fairly certain that Brian Gionta and Tomas Plekanec are injured, but it can't force you to not try.

Vanek's give-a-damn level has been approximately zero since game two against Tampa Bay in Round 1, and thanks to P.K. Subban and Max Pacioretty putting three goals on his stick and an empty netter, he has some goals to show for it anyway. He has to find a way to give more.

Last night Vanek lost a puck battle on the half wall in the offensive zone, against no one. He was there, alone, saw a Ranger five feet away, and just gave up and skated away. For his sake, I hope that contract with Minnesota is already signed.