Montreal is beside itself with Stanley Cup fever. New York? Not so much.

Share All sharing options for: Top of the Heap: The popularity order of New York metro area sports teams

Hockey is a religion in Canada. The Canadiens' trip to the Eastern Conference Final is cause for celebration and anticipation not only in Montreal but across much of the country.

In New York City, hockey is just one of many entertainment options fighting for the dollars of customers. The Rangers, who face the Habs for the right to play for the Stanley Cup, have a lot of competition for attention from news, events, shows, attractions and other teams right in their own backyard.

I'm not sure if a lot of Canadians know what the popularity pecking order among New York teams is and feel they might be surprised to see just who's where. As someone that's lived in three boroughs, Long Island and now New Jersey, allow me to give you the tour.

New York is first and foremost a baseball town and it always will be. Blame Babe Ruth, who not only brought exciting homes runs and World Series victories to the Bronx, but also got the city addicted to acquiring prodigious and productive Hall of Fame players in exchange for nothing of value. Don't let the declining attendance and mediocre record fool you, the Yanks run the place. When Derek Jeter farts, every paper has a story about it. And since he's on his Grand Farewell Tour - the third Yankee to have one in the last three years - every team in the majors is bending over backwards to give Jeter lavish gifts just for letting him fart in their house, which is the dream of every New Yorker.

The Mets have an astonishing record of incompetence, but they remain popular based on two iconic World Series wins and the loveable collection of goofballs they've had over the years. Their owners remain unlovable goofballs, but that never stops the die hards from watching games in September against the Marlins while both teams are a combined 40 games out of first place. Hope Springs Eternal isn't just the Mets' motto; it's also the name of several nail salons in Flushing.

The defining day in Jets history was not their Super Bowl III victory over the Baltimore Colts in 1969. It was May 1, 1997, the day that wide receiver Keyshawn Johnson released his autobiography "Just Give Me The Damn Ball," after the Jets went 1-15 in his rookie season. No matter how comically, impossibly, horrifically awry a season goes, the Jets are always a story, usually a tragedy. They maintain a high profile despite the fact that climbing on their bandwagon is like jumping into a bus engulfed in flames and headed off a cliff.

Quick, when did the Knicks last win an NBA title? Time's up. It was 1973. You wouldn't know it from the amount of ink spilled analyzing what they've done, what they haven't done, what they need to do and what they can't do because of some NBA salary cap or draft pick rule that was put in place to keep teams like the Knicks from acting like the Knicks. Whenever an NBA team signs a player to a head-slappingly stupid contract, it's only a matter of time before he's traded to New York. There are more writers covering the Knicks than there are Knicks in the Basketball Hall of Fame. The team is a great representation of New Yorkers because they spend a ton of dough and receive just enough attention from the employees to keep from cancelling their service or moving.

The Giants really are the anti-Jets. They're historically pretty successful, winning four Super Bowls, including two in the last few years, and even their "bad" seasons are rarely ever scorched earth disasters like their stadium-mates. Even their championship parades are quiet affairs, after which the players disappear and disperse into the night like football ninjas. During the season, the media spotlight is always on coach Tom Coughlin and quarterback Eli Manning and no one else. After wins, every story is "Coughlin/Eli Silences Critics" and after losses they're "Coughlin/Eli Needs to Go," making their controversies relatively tame.

A few short years ago, the then-New Jersey Nets probably wouldn't have even been included on this list. The franchise often was left abandoned like a broken down car on the shoulder of the Garden State Parkway. But since moving to the brand spanking new Barclays Center in Brooklyn, the Nets have done two things that New York sports fans love - spent a zillion dollars and brought in a bunch of old guys with names that they've heard before. The stark black-and-white Nets jerseys made the rare jump from new to nationally popular to ironic hipster-approved in one season.

The preeminent hockey team in New York last touched the ice as a unit 21 years ago. To some Rangers fans, media and casual observers, 1994 was last season, and the one-and-done Oilers alumni team is referenced and venerated constantly. Widely-heard sports talk radio pope Mike Francesa chats with a guest about hockey maybe - at most - six times a year, and even then only asks questions about Mark Messier, Brian Leetch and Mike Richter. The waiting may be over, but the hangover continues to this day. 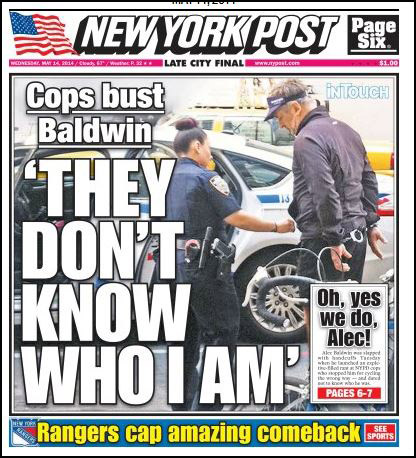 This was the front cover of the New York Post the day after the Rangers clinched a berth in the conference finals.

Alec Baldwin acting exactly as you assume Alec Baldwin would act is apparently 97% more important than a shot at the Stanley Cup. It's probably because the Rangers have been on cruise control for a few years now. To hear it from many of their entitled fans and haughty writers, the team has been "just one player away" from a Stanley Cup since 1995. Even when they missed the playoffs for seven straight years in the late 1990's and early 2000's, the "perfect fit" was always the next high-priced All Star who turned out to be anything but perfect. The current roster features three guys - Brad Richards, Rick Nash and now Martin St. Louis - who were "just what the Rangers needed" three years running. The only player the Rangers truly need is goalie Henrik Lundqvist, who elevates a decent team into one of the NHL's final four. Too bad to most New Yorkers, he's just another handsome dude playing with his kids in Union Square Park.

The Devils are Cousin Eddie to the Rangers' Clark Griswold. Despite winning three Stanley Cups since the Rangers won their last, the Devils are seen as the dirty, rude, obnoxious house crashers even in their own arena. And that's by the sportswriters. To the average Rangers fan, every player the Devils have ever had "sucks," until the Rangers sign them to a super-sized contract the minute they hit free agency. Kids in New Jersey end up as Rangers fans at a rate so alarming that even on old Islanders fan like me feels bad for the Devils. Speaking of which...

Andrew wanted me to put the Rangers last on the list for maximum pre-series trolling, but even I'm not that big of an Islanders homer. The Islanders are, by any measure, buried way in the distance of the New York sports landscape. So far you can't even see them. A person could drive from one end of Long Island to another - a distance of 118 miles including Brooklyn and Queens - and not see or hear a single advertisement or mention of the Islanders. Their home newspaper and TV broadcast partner are both owned by James Dolan, the mini-tyrant who owns the Rangers and Knicks. Not that the Islanders ever do anything worth writing about. Their one season return to the playoffs last year and handful of good young players did little to change their reputation as a worthless, directionless, forgettable franchise. Years of failure, persistent ownership issues and a parade of good players lost to other teams have left their fanbase in tatters and their media presence almost nonexistent.

The Islanders move to Brooklyn in 2015, and it might be months before anyone notices. The most saddened by the move would be the droves of Long Island-based Rangers fans who are too stupid, lazy, xenophobic or cheap to go to Madison Square Garden to see their own team play. The easy tickets and open invitation for mouth-breathing misanthropes to mock dozens of Islanders fans at Nassau Coliseum is set to evaporate like the Islanders' once-proud place in their own community.

Every team on this list should thank the deity of their choice everyday for the Islanders. Simply by showing up and not changing their uniforms, they're already not the most insignificant team in the area.

"Wait. What happened to the MetroStars?"

Dan is a contributor to Lighthouse Hockey, SB Nation's No. 1 New York Islanders blog. We tend to get a little silly sometimes.