On Michel Therrien, the Gambler's Fallacy, and Hockey's Probabilistic Nature

The Canadiens coach's post-game analogy can serve as a lesson to hockey fans, media, and managers local and beyond about what truly causes wins and losses in hockey

Share All sharing options for: On Michel Therrien, the Gambler's Fallacy, and Hockey's Probabilistic Nature

Properly analyzing hockey requires an understanding of its probabilistic nature, something that not nearly enough people have.

Michel Therrien made a comment in his post-game press conference after game six that stood out as something more than the usual cliché and drivel. It was an anecdote that seemed out of place and was made practically unprompted.

"It's a seventh game, and anything can happen," said Therrien. "I've always had a philosophy like a gambler's. When you play roulette, some people are going to say if the ball falls 10 times on black, then it's due to fall on red. But that's not the reality. Every event is a new moment, the game we're going to be playing is a new moment. It's a seventh game, absolutely anything can happen. That's the beauty of Game 7."

What Therrien was referring to, of course, is the gambler's fallacy. In a Monte Carlo Casino on August 18, 1913, as the story goes, the ball in a game of roulette fell on black 26 times in a row. Gamblers lost millions of francs betting against black under the assumption that a red was somehow due, that there was an imbalance that needed to be rectified, and that the odds of the next roll turning up red somehow increased every turn.

What Therrien took from the fallacy was the fact that every roll, or every game, presents a new opportunity that isn't dependent on past results, but he missed the more important lesson, which is that every roll contains an independent set of odds. For roulette, those odds are 50-50, at least when it comes to red or black. In hockey, those odds are impossible to define, but for every game a team has a set chance of victory, constantly in flux, which is manipulated by a set of smaller odds, the most easily comprehended of which involves the process of shooting.

Every shot a player takes has a set probability of going in the net. We can't possibly know what that probability is, since it is a combination of talent, location, positioning, timing, other players, the ice surface, and a variety of other factors (Note: Probabilities on the images are made up). All we can do is attempt to define that number as closely as possible, and hope that over large samples our best estimate holds up. 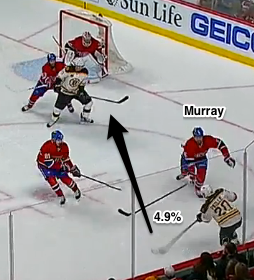 What Therrien may have been missing, when he was inserting hulking defenseman Douglas Murray into the lineup for the Canadiens, was that no shot has a zero percent chance of going in. There are shots whose probability of resulting in a goal is negligible, but for the most part, even the most seemingly non-threatening point shot, by virtue of tips, rebounds, and bounces, has a significant chance of going in.

Of course, hockey, like roulette, is partially deterministic in nature. Just as the way in which a dealer tosses the ball and spins the wheel will determine whether it turns up red or black, the way in which the 12 players and goalies on the ice play will determine whether an offensive zone possession results in a goal. But these exercises are both also probabilistic. No matter how the dealer tosses the ball, over a large sample it will turn up red and black each approximately 50 percent of the time. And no matter how the defending team plays defense - active sticks and good positioning can only prevent so much - shots will find their way into the net.

So-called advanced stats like Corsi and Fenwick - which measure shot attempt differentials - take this principle to the extreme. Obviously no two shots are equal, but on-ice shooting and save percentages fluctuate wildly, while shot differentials tend to stay fairly constant, so they provide us with the most basic of shot probabilities. When a player is on the ice for 21 shot attempts for and 50 against - as was the case for Murray at 5-on-5 in the three games he played in this series - it's highly unlikely that the probabilities of scoring will end up in the player's favor. And really, all a coach can do is try and maximize those probabilities, because over the long term they will bear out.

When Therrien claims that the 11th roll is independent of the last 10 he's right. But the appropriate lesson here has nothing to do with game sevens. Whether Murray manages to get through a game, or two, or three, without seeing minuses next to his name on the score sheet doesn't matter. That ability to get through shifts in the defensive zone unscathed has little impact on his ability to do so repeatedly, or on the next night. Inevitably, a player whose team is perpetually outshot with him on the ice will see that reflected in the goal column, no matter the player, no matter their commitment, and no matter the team's system. There are players whose shooting or defensive abilities can mask possession deficiencies to an extent - take Steven Stamkos for example - but not nearly to the extent that Murray's would need to for him to be a desirable option.

Inevitably, a player whose team is perpetually outshot with him on the ice will see that reflected in the goal column

For much of the season, Therrien fell pray to the gambler's fallacy in a very different way from those men back in 1913, but to no lesser extent. Douglas Murray can block all the shots that he wants, but even a shot with a one percent chance of going in upon the release will find its way through once every hundred tries, and when a player is not producing his own offense to counteract that, he tends to get burned, often at the worst possible time.

Therrien's mention of the gambler's fallacy was odd considering there are a million more common metaphors for the unpredictability of a seventh game in the playoffs. But maybe, just maybe, it was a nod to a realization he had had between games five and six about how to best maximize a team's shot at victory, and a sign that he wouldn't be fooled again.