Staring down their biggest rivals, can the Canadiens start their Conference Semifinal series with a win in hostile territory?

The Montreal Canadiens got off to a fast start against their first round opponents. They dominated the possession in Game 1, and conveyed that strong play into an early series lead. So did the Detroit Red Wings. 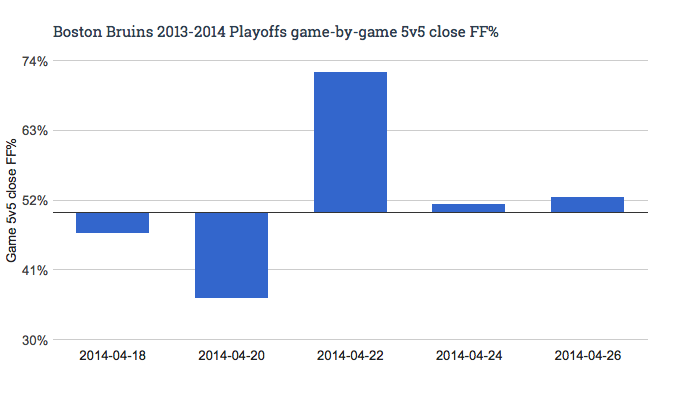 While the Habs were able to build off that momentum and take a series sweep that few expected, the Red Wings slid back, suffering the fate many predicted they would. Despite their fast start, Tuukka Rask was one Bruin who would not yield, and by the time the Red Wings found a way to produce more than one goal in a game, the Bruins juggernaut was already in their nigh-unstoppable top gear. The Habs are going to have to find a way to get goals early, and Detroit wasn't able to oust the Bruins, they may contributed a couple of useful strategies.

First and foremost, the Red Wings were able to use their forward depth to great effect, as the third line of Gustav Nyquist, Riley Sheahan, and Tomas Tatar manhandled the Bruins third line of Carl Soderberg, Loui Eriksson, and youngster Justin Florek. That third trio proved vulnerable, taking a beating on possession without the protection of Zdeno Chara. Of course, that crew also benefitted significantly from Rask's staunch play in net, but their propensity to give up shots might give the Canadiens a weak spot to target. If the Habs' third line of Rene Bourque, Lars Eller, and Brian Gionta demonstrates the shooting prowess they did in Round 1, Les Glorieux may be able to exploit the bottom of the Bruins lineup in a way that the Detroit was never fully able to.

Scoring goals is fundamental, but Montreal will also need to ensure Boston isn't able to rack up red lights like they did against Detroit, where they averaged 3.5 goals per game. Fortunately, Boston's strength in that performance would appear to play into the Habs strengths, as well. First and foremost, and if the first round is any indication, Carey Price is more than up to the challenge of continuing to defend the Habs' crease. Price put forth a very respectable .922 save percentage at evens against Tampa, and those numbers become more impressive when one considers the struggles he endured in Game 1 of that series. Jimmy Howard and Jonas Gustavsson were not part of the Red Wings' early demise, and C3P1 should be capable of ensuring that Boston sees a tough 'tender for the second consecutive series.

Finally, Boston did a great deal of their damage on the powerplay against Detroit, scoring six of their fourteen total goals while on the man advantage. By limiting Boston to ten fewer shot attempts per game than they averaged over the course of the regular season, Detroit showed that a well-formulated and well-executed strategy can slow down the Bruins. Michel Therrien's coaching was one of the stories of the first round, as he harnessed the strengths of his troops to create a fast, aggressive, puck-possessing machine. If Therrien continues his playoff renaissance, and Montreal can mitigate Boston's attack at even strength like Detroit did, the Bruins may find that scoring powerplay goals against the 3rd ranked penalty-killing Habs is much more difficult task than scoring them against the Wings was.

Detroit's three-man blue line melted when Hamilton hit top speed, and against a team that just won a series based on their ability to stand up, play defense, and utterly frustrate their opponents when trying to enter the offensive zone, prime powerplay opportunties likely won't be so plentiful.

The Canadiens have spent the last nine days resting, recuperating, and plotting against the team that looked to be their probable playoff opponent for the vast majority of Montreal's time off. In analyzing where Detroit fell short, the Canadiens' coaching staff has tried to find what they have that Detroit doesn't. A little Carey Price magic doesn't hurt, but Mike Babcock's boys enjoyed good goaltending for the duration of their series. Maybe Montreal comes out on top with their and fourth line, but Detroit's kid line was pretty strong, too. Maybe the difference is the Habs' defensive depth, where two capable pairs reside in the top four and the two reliable and effective veterans man the the third pair.

No matter what, the Canadiens should match up well against the Beantowners. However, when facing a squad as good as the Bruins, one has to find the missing ingredient that exposes a seam in that opponent's otherwise consistent success. Montreal can look to many different places to find that ingredient. As long as they find it in Game One.