Canadiens vs Bruins: The definition of rivalry

Count em up folks. 33 post season meetings, and one more on the way. The Habs and Bruins have been at this for decades, and there is a lot of history going into this second-round series.

Share All sharing options for: Canadiens vs Bruins: The definition of rivalry

About to face off for their 34th playoff meeting, the Canadiens versus the Bruins is arguably the greatest rivalry in all of sport. While Montreal commanded bragging rights for the better part of 40 years, Boston has not been without its victories. When you add in the fact that the Bruins have won it all more recently, the implications of this rivalry should make for a very intense series between these two teams.

"He told me he was alright, but he wasn't just then. He didn't even know the score of the game" - Dick Irvin

While the Habs and Bruins have a history that predates the great depression, I believe that the sheer intensity of this rivalry is rooted in the Maurice Richard era. Hockey was growing as a sport in North America, and the emergence of Richard as a star for the Canadiens made him a target all over the league, particularly the rival Bruins. Most fans of either team will know the photo of a bloodied Richard shaking hands with Bruins goaltender "Sugar Jim" Henry after he scored an epic goal to eliminate the Bruins in the 1952 semifinals. Richard had recently returned from being stitched up after being rendered unconscious from several blows to the head on one play. According to Dick Irvin, Richard didn't even know the score of the game just before jumping on ice and potting the series winning goal. 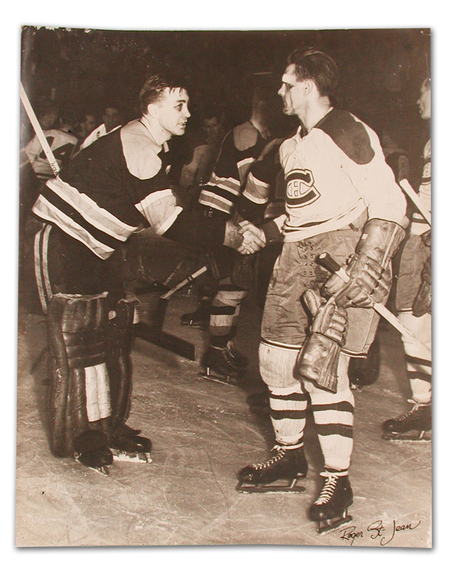 Of course, the infamous Richard Riot was a result of his suspension for an incident during a game against Boston. A game in which Hal Laycoe pioneered "the McSorley" by assaulting Richard, and received no supplementary discipline. Do we even know how old the NHL wheel of justice actually is? Richard went on to return for five straight Stanley Cups.

In the 60's and 70's, it was sheer Montreal dominance. From 1964-1979, the cup was owned by the Canadiens, with 10 wins to Boston's two. During that same period, only the Leafs (1967) and the Flyers (1974,1975) were able to join Boston and pry the cup from its home in Quebec.This Canadiens dynasty did however have its fair share of run-ins with the black and yellow. Yellow. The 1969 semifinals was a highly anticipated series, as the powerhouse Canadiens took on a Boston squad led by Bobby Orr and league-leading scorer Phil Esposito. It wasn't the Bruins' time, as the Canadiens were led by Jean Beliveau to a six-game series win.

The 1979 semifinals are perhaps the crown jewel of this rivalry, at least for our side. A stacked, and supremely confident Canadiens went up against a Bruins squad that no longer retained the services of legends like Bobby Orr and Phil Esposito. Despite these omissions, Don Cherry's rough-and-tumble team took the Canadiens for all they were worth, and forced a decisive game seven. Poised to be the first team in the series to win an away game, the Bruins took a late penalty for too many men, allowing Guy Lafleur to tie the game. Yvon Lambert would cap off the game in overtime, and the Canadiens would go on to win the finals and earn a fourth-straight Stanley Cup.

I get how some people might be compelled to look at the penalty as the decisive factor in the game, but EOTP has all the doubters covered. Have a look at Andrew Berkshire's compilation of advanced statistics for that Game 7 matchup, and re-evaluate whether they had a legitimate expectation of winning, notwithstanding any penalties that were or were not called. The Canadiens were quite dominant, but the Bruins weathered the storm and hung in there to make things exciting.

Moving into the 80's and 90's, orienting the playoffs based on divisions all but ensured that the Bruins and Canadiens would see a lot of each other in the playoffs. As much as we can relish the near 30-year dominance enjoyed by the Habs, the regular season and playoff success of the 80's and 90's was not what most would have envisioned. The Habs did dispose of the Bruins en route to the 85-86 title, but they were taken care of ahead of time in 1993. Pretty much every realignment that has ever been done in the NHL has benefitted this rivalry, as lack of championship success from 1993 to 2011 from both teams did little to tone things down.

I remember being 12 years old and watching Kyle McLaren obliterate Richard Zednik with an elbow, but we still won the series as an eighth seed. Then, we did it again two years later as the seventh seed. We didn't win it all either time, but we beat Boston, so neither of us did and I could always live with that. The Bruins broke that near 20-year cycle in 2011, their first time defeating the Habs en route to the Cup since 1929. I'm one of those Habs fans who loves the number 24. 24 cups, 24-9 against the Bruins in the playoffs ... but, that 2011 Cup is something I haven't lived down yet.

"The fans, the media, everybody gets whipped up in a frenzy when Boston plays Montreal, and that’s during the regular season. In the playoffs, forget about it … it’s a tornado. It’s just unbelievable."   -Chris Nilan

I'm generally pretty vocal that I feel this is the best rivalry in sports. It's really cliché to say, but anything can happen when these teams play each other. The 1979 Bruins really had no business taking the powerhouse Canadiens to a game seven. The 2002 and 2004 Habs probably had no business getting past a stronger Bruins squad. Maurice Richard was concussed, but jumped on the ice and scored an incredible goal while dazed and bleeding profusely. When these teams go head-to-head, the players elevate their game, the fans go into a frenzy, and it is always very entertaining.