Dive Files: The Bruins are the NHL's uncontested emperors of embellishment

Today I'll take a totally unbiased, legitimate and scientific approach to establishing an answer to the age old question: "Which team represents the epitome of a diving franchise?"

Share All sharing options for: Dive Files: The Bruins are the NHL's uncontested emperors of embellishment

As we prepare for the second round, let's take a moment to figure out which franchise should be known for its acting skills.

I'll take a look at both the Canadiens' and Bruins' history of diving and, by doing so, establish once and for all which team partakes the most in the embarrassing NHL phenomenon known as diving/embellishing.

First let's take a look at the captain of the Bruins, who sets the standard for the rest of the team. While watching these clear and damning examples of bad acting, keep in mind that Chara is endlessly quoted as being one of the strongest men in sports, a paleolithic behemoth that is impossible to knock off its skates ... unless he's looking for a power play.

"Nobody pulls baby in the corner!"

To his credit, Chara's helmet probably did get grazed by Hendricks' stick, however, reacting as if you've just been sniped from the rafters is a bit much for the strongest man in hockey.

"The arm movement was graceful, the leg flailing was beautiful, I have to give him a 9/10" - The Russian judge.

There is a plethora of additional examples I could give you to further demonstrate Chara's penchant for the dramatic stuff, but in the interest of time and bandwidth, we'll end Director Dive's reel here.

Next we'll take a look at perhaps the most notorious of the bevy of Bruins divers, the man-rat known as Brad Marchand.

It should come as no surprise that Marchand set the record for most dives in a game that night.

To the referees' credit, not all of his utterly pathetic and embarrassing dives go unnoticed.

You may be saying to yourself that Marchand took a legitimate shot to his left knee there, thus he has every right to clutch at his ... wait .. his right knee? Classic Bruins playoff hockey.

Let's keep these Oscar worthy performances coming, shall we?

The Bruins are so desperate to draw calls via dives that they're willing to attempt the technique with inanimate objects. That's dedication!

This one is my personal favourite. Such style, such grace, such technique.

The most astonishing part of the Bruins' diving phenomenon is that players only buy into this ideology while wearing the 'spoked B'. Once they depart from Boston their diving tendencies completely vanish. It must just be a coincidence.

The good news is that at least the coach and the media aren't being total hypocrites when it comes to their see-through attempts at playing the victim card:

I'm going to stop here. Those are the results of approximately thirty-two seconds of research on youtube, meaning there is undoubtedly an overabundance of more classic Bruins diving examples available.

However, for the sake of objectivity, let's take a look at the worst Habs dives in the past few years:

My apologies for the grainy footage, but I had to dig deep to find this one example. Hopefully the Habs get rid of this guy, because they clearly can't have him representing the franchise.

Ladies and gentlemen, the proof is in the pudding .

Which team tends to milk calls, take easy falls, and attack the balls? The answer is clearly the one, the only, the despicably hypocritical Boston Bruins.

Their dedication to diving has brought them success in the past, so expect the embellishment to be a major part of Boston's game plan while facing the Habs in the second round of the 2014 playoffs.

The Bruins are, after all, the undisputed diving champs of the NHL. 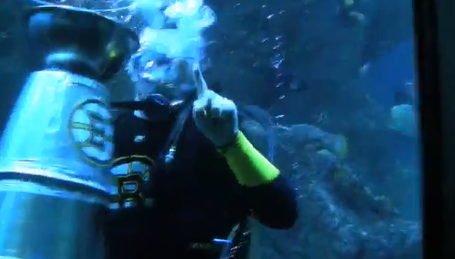