Cheer Up Tampa: It Gets Worse Before It Gets Even More Worse

Rest assured though, it never gets better and everything you've ever loved is a lie. Except Steve Irwin, but I wouldn't expect him to save you anytime soon

Share All sharing options for: Cheer Up Tampa: It Gets Worse Before It Gets Even More Worse

It's tough being a Tampa Bay Lightning fan these days. Their beloved squad of young imps and grizzled scalliwags already find themselves down 3-0 in the Atlantic Division Quarterfinals against their long time rival Montreal Canadiens. They have watched helplessly as the Bolts completely squandered their home ice advantage in the process. They've seen star forward Steven Stamkos, Olympic Hero, despite a great effort in Game 1, go limp, looking more like Sprague Ribinsoin than the 2008 first overall draft pick (2008? Where DOES the time go?). They've seen an alleged, debilitating injury to alleged starting goaltender Ben Bishop. They've digested a complete inability by de-facto replacement Anders Lindback to show even the remotest ability to understand the basics of puck stopping in Bishop's absence. The famed Latvian kid, in fact, as Lightning fans have learned, is just a Latvian Kid.

There's only 6 of them, Tampa Bay fans, but they suffer together.

And if that weren't hard enough to handle, there is nothing of any substance historically for Boltheads (that's probably what they're called, right?) to take pride in. All the one time heroes of Bolts yore are gone, forging new identities in better hockey markets, with more prestigious franchises (or, you know, DUIs and some time "mentoring some kids" in Edmonton). Playing in only their 7th season with a playoff berth in 21 tries, mostly being unceremonious first or second round defeats at the hands of better teams who deserved it more, there is just not a whole lot to write home about.

I suppose you may be sitting there, slack jawed of course, thinking "Well hold on there, pilgrim. What about that 2004 Stanley Cup championship? We were there for that. We remember that. We celebrated the 10th anniversary of that championship this year. There's something to have some pride in"

Well, you would think so, Florida Man, you would think so. But look at you. You've spent the entirety of your adult life blitzed on diesel fumes and suntan lotion, what memories do you have left that you can confidently affirm are real? That bender where you woke up with George Hamilton and dual sets of conjoined twins? That time you won the Daytona 500 race to the Busch line? Harbouring Elian Gonzalez? It's plausible, I suppose, but let me tell you with absolute certainty that the Tampa Bay Lightning did NOT win the Stanley Cup in 2004.

Florida has a reputation as a state where the comically, horrifyingly, fully perplexing unbelievable happens. If you hear a story about a man being shot over an argument about utensils at a Baptism Party, you would be immediately dismissing the credibility of it until the words "In North Florida" finished the sentence. The weirdest things you will ever see, happen in the Sunshine State. It's a fantasyland for mullets and toothless grins and 90 year old Quebecers unwilling to ever give up their Speedos.

Regardless, the stories surrounding the dubious Stanley Cup "victory" are just too far out there, how could you ever possibly believe it?

Consider the things we "saw" during the 2004 Stanley Cup Finals: 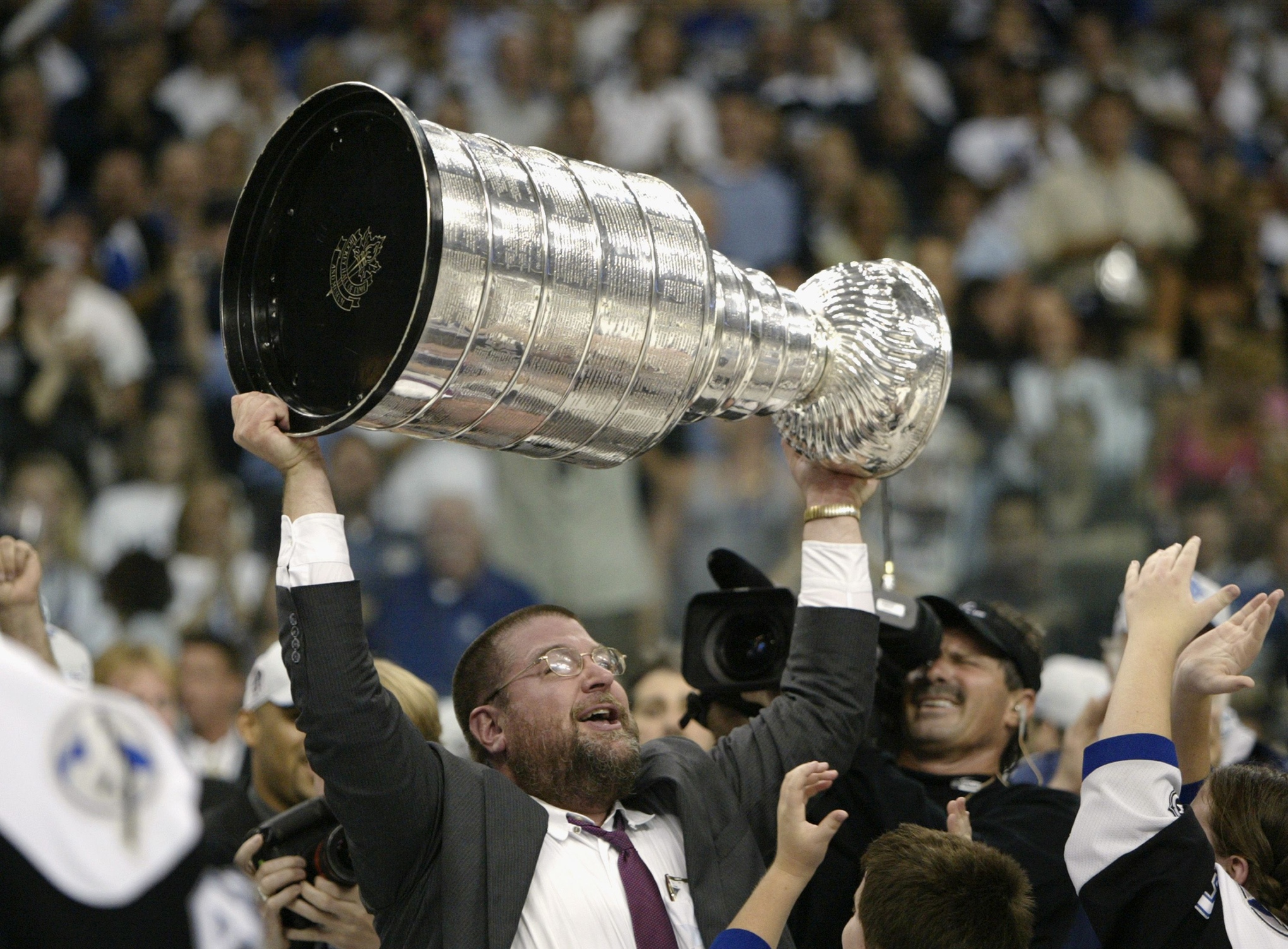 As a Flames fan, let me tell you a thing or two about Jay goddamn Feaster, okay? There is NO WAY a professional hockey team at the NHL level could EVER win a Stanley Cup with Feaster at the helm. This is a man who traded Dan Boyle in his prime for Matt Carle and a draft pick that ended up being Carter Ashton. Boyle has been a roughly 50 point per year defenseman until this year when age finally caught up to him. He dealt Brad Richards, again, in his prime, to Dallas for a yet to be overrated and still generally regarded as shitty Mike Smith. Again, nope. Lightning fans, I'm certain, applauded the deals at the time, thumb upping the transactions with the kind of bravado and bluster usually reserved for a scheduled Qur'an burning.

This is a man who has a law degree, supposedly read the terms of the latest NHL CBA, decided anyway that he could offersheet Ryan O'Reilly without losing him to waivers, despite it being clearly stated in the terms that he in fact could not. An only slightly less inept Greg Sherman somehow figuring out that he should match the offer for O'Reilly is the only thing that saved Feaster on that one.

This is a man who would go on national TV with what is a collection of players that would at best net you a tenth place finish and boldly guarantee a playoff spot, thinking the move would, I don't know, unify fans and earn the team respect, and not, say, make him a target for ridicule.

He did basically coin the term "basement underwear bloggers" which is actually pretty great, but that's not enough to win you a Stanley Cup. And it wasn't.

John Tortorella was fired as Lightning Head Coach in 2003. He went on to have a successful career as a public relations guru, representing many high profile athletes, earning a reputation for being hard nosed and edgy with the media:

Above is a clip of John Tortorella fielding media questions in 2011 on behalf of the Tampa Bay Buccaneers after leading the NFL in team arrests. Tortorella had a dispute with a St. Pete's Times reporter named Brook Sey, who was asking Torts if he had any access to ketamine.

Also Torts likes dogs. Dogs are illegal in Florida because they provide people with joy.

Sure, Lecavalier was a good player once. Yes, Martin St. Louis was once a productive hockey player. Nikolai Khabibulin, we're told, was indeed at one time sober enough to drive to the rink without being impinged by police. But my god, Man, the 2004 Tampa Bay Lightning were not a collection of men assembled to champion a quest for hockey's ultimate prize. Captain Dave Andreychuk was playing in Florida because he was 80 years old and it's the state where hockey players go to die. Martin Cibak and Eric Perrin were centers behind Lecavalier and Richards, and had about as notable an NHL career as Manute Bol. Tim Taylor was a television character on a sitcom about house renovations and grunting. Dmitry Afanasenkov is not even a real person. Chris Dingman, are you fucking kidding me?

The Tampa Bay Lightning were essentially the team that South Florida retirement community thought they were getting in Slap Shot, and with the same level of skill. You'll remember that team supposedly won a championship through some seriously dubious means as well: 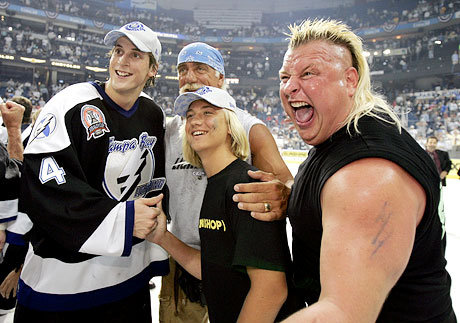 IN WHAT WORLD WOULD YOU EVER BELIEVE THIS IMAGE WOULD BE REAL, YOU METH ADDLED FREAK (via vh1.com)

The ambassador for the Bolts during their "Cup Run" was the immortal Hulk Hogan, and right there, let's get real. Hulk Hogan was not reppin' the Lightning. No way. The Real American Hero was out telling kids to say their prayers, pumping unknown substances into his 24 inch pythons (that would render his other python into a half dead garter snake, as we'd later learn), getting divorced, and teaching Al Iafrate how to style his hair. He had no time to spend at an arena with a bunch of Clearwater rednecks with wardrobes consisting entirely out of gator skin and a parking lot full of El Caminos and John Deere mowers with Hank Williams in every 8-track player. That really seems like more a Jake Roberts kind of thing. 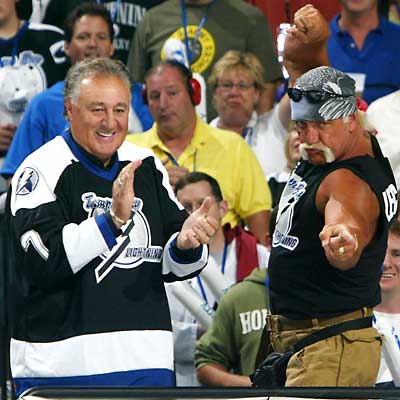 Hulk Hogan absolutely does wear a fanny pack though, or as it's known in Tampa Bay, a Skoal pouch (via lindstrom.ca)

Of course, the rumour surrounding his appearances at Lightning games were to watch his daughter sing the National anthem, which all the Billy Rays in Tampa insist is real. Well, I submit to you, how could she be belting out the respective anthems when a) she can't sing b) she has no idea what Canada is, and c) she was saving the world?

Get it together, Florida

This is how the 2004 Stanley Cup Finals ended:

As you can clearly see, the 2004-05 NHL Lockout was declared seconds before Calgary Flames forward Martin Gelinas directs the puck into the net, thus ending the series in a draw, never to be spoken of again. It's right in front of your faces, idiots.

Of course, no one in Florida remembers 2004 playing out this way, and you can't blame them. They were blissfully lost in the midst of a Jeb Bush government, and in time awoke to learn that it's generally not acceptable to be racist, or inbreeding, or not bathing, or brawling over prize tickets at a Chuck E. Cheese in the civilized world. You can see why they'd want to regress into their own insular shell, where it's safe, and warm, and you're totally cool to leave the kids in the car while Mommy gets her drink on in the strip club, or leaving a man zip-tied to a tree, or whatever the hell this is about. And yeah, maybe they suffer from a bit of revisionist history right now because their hockey team is down a couple of games in a series with the Habs that looks to have no ladder out of the sinkhole. But 2004 didn't happen. I cannot stress that enough. And I know that upsets you, Bolts fans, but don't worry, if we're talking Tampa hockey in 2004, you weren't there anyway.