Can the Habs secure home ice advantage for their pending first round playoff match-up?

Share All sharing options for: Canadiens vs Lightning preview

As the 2013-14 regular season draws to a close, the Montreal Canadiens have only a few items left on their to-do list.

The Habs have already assured themselves a playoff position, with a healthy twelve point lead heading into night's sixth-to-last game of the year. They've managed to avoid the catastrophic prolonged injury to a key player, weathering brief absences here and there, and surviving during Carey Price's prolonged Olympic break. They've even reeled in a big fish on the trade market, taking what was already a strong roster and adding a bonafide scorer from the wing position. Despite a chorus of consistent concern with regard to a few problem areas, it's been a good year in Montreal. The playoffs approach, and they do so with optimism.

However, there are a couple things the Habs would still like to accomplish.

Foremost among those tasks is capturing home-ice advantage, an advantage that Montreal could more or less seal up by beating Tampa Bay in regulation this evening. Even if the game were to go to extra time, as every Lightning-Habs game so far this season has, even a single extra point would be significant. Of course, if Montreal were victorious this evening, it would mean a tied-up season series in which the road team won every matchup.

Next, the Canadiens are going to have to show that they can shutdown Steven Stamkos. To be fair, they've yet to have the opportunity, as Stamkos has been injured for all three contests so far this season. When he went down after slamming into the net while back-checking against the Bruins in November, it was something of a lucky strike for the Habs. Stamkos was on a torrid pace before his injury, and the Habs were able to enjoy three low-scoring affairs in his absence. Tonight, the Habs will have to show that they can stop one of the league's foremost attackers from getting to Carey Price. How they approach that, especially with their go-to defensive forward duo of Plekanec and Gionta separated of late, will be interesting. With skill like this, it's clear the Habs will need to do more than just test-drive a strategy: 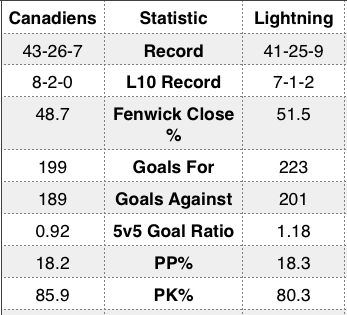 Ultimately, the factors most likely to swing tonight's contest are the factors that have swung the season series so far: the goalies. Carey Price and Ben Bishop have been otherwordly so far, providing an interesting precursor to the game tonight and the series of two weeks from now. Define otherwordly? Price and Bishop have seen 184 pucks come their way over three games between the two squads to-date, and have allowed a paltry seven goals. The .962 save percentage is a step up even from the elite play that both keepers, the NHL's number 6 and 2 ranked goaltenders, respectively, have put up this season.

Logically, neither team needs to win this evening. Both teams are going on to the second season, and their matchup is essentially set. With a half-dozen games left in the year, there's even enough time to do some clean-up on any messes made this evening, as they pertain to the home-ice advantage situation. When it comes to the playoffs, however, logic and predictability can take a back-seat to energy, luck, and timing. The series that begins six games from now is going to rely on all of these factors, and harnessing them begins with a win tonight.

For the Montreal Canadiens, anything else would leave their successful regular season feeling simply incomplete.