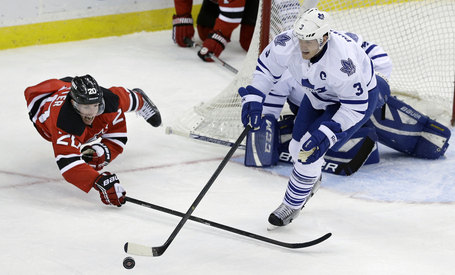 Dion Phaneuf - Not a Norris contender via www.officepools.com

As the end of the regular season approaches, many media outlets have started speculating on who should be awarded the Norris Trophy. I'd like to throw my hat into the ring with this article, where I count down from honourable mention to the top-3 candidates for the Trophy. My analysis will rely on stats from extraskater.com, with a mix of possession stats, goal stats, production, and deployment. I won't be worrying about the sustainability of a player's season - i.e. I won't give consideration to a player's PDO - because I believe that the Norris should focus only on the current season and not his track record or predicted sustainability.

Karlsson, who won the Norris Trophy in 2012 after a 78-point season, has been considered among Norris favourites for the past 3 years. This season, his offensive production strongly resembles that of his Norris-winning season. Yet, the main knock on Karlsson is his defensive play and decision making. This season, Karlsson has been a great possession player (54.7% CF, +4.4% CF rel), but his Goals For % has suffered (47.7% GF, -0.1% GF rel), largely due to a 988 PDO. Karlsson receives extremely easy zone starts (54.9% O/DSt), and such a low GF% with those starts definitely calls his defensive abilities into question. Despite this, Karlsson is relied on for 26.8 minutes per game, and is on for 43.3% of his team's even strength time and 76.4% of his team's powerplay time. In the end though, it is the combination of soft zone starts and bad GF% that takes him out of the top 3, but it is impossible to ignore his great possession play and stellar production, so he's my honourable mention.

Chara has been considered the model defensive defenseman for years now, but he has still had some productive seasons, including this one. With 16 goals and 35 points so far, he is certainly having an impact on the scoresheet, and with positive possession numbers (54.9% CF, +1.8% CF rel) in tough minutes (47.9% O/DSt), it's evident that he's meeting his usual standard of defensive play. His overall GF% is stellar (60.2%), but one could claim that it's more a result of team play than his individual play, as his GF% rel is negative (-2.7%). Still, 60% GF in tough minutes is pretty damn good. Clocking in at nearly 25 minutes per game (24.6), Chara plays a lot at 5v5 (37.3% EVTm), but gets a major ice time boost from playing for over half of the Bruins' special teams time on ice (56.2% PPTm, 57.2% SHTm). In sum, Chara is playing well in a two-way role with tough minutes, but his low relative possession/goal stats and his relatively low production compared to other candidates leaves him in third place.

And there's the sound of a massive collective sigh of annoyance/disbelief/contempt coming from my fellow EOTPers. I'll ask you to hear me out on this one before you comment "NISKANEN SUX." The main reason Niskanen is in second place is, as I made clear in the intro, that I'm only considering the results of this one season, and not the candidate's track record or the sustainability of his results. With these criteria, we must conclude that Niskanen has been outstanding. Like Chara, Niskanen sees relatively tough zone starts (48.8% O/DSt), but has great possession and goal stats (65.7% GF, 53.5% CF). Where Niskanen really shines though is his relative possession and goal stats, where he's among the best defensemen in the league (+22.1% GF rel, 1st among dmen, +7.6% CF rel, 3rd among dmen). Furthermore, Niskanen is having a good season offensively, with 10 goals and 41 points in 73 games. Now for what's keeping him from getting the Norris: Niskanen plays only 21 minutes per game, and despite playing for 35.1% of his team's even-strength time and 53.4% of its powerplay time, he's only on the ice for 14.1% of the time the Penguins are shorthanded. This seems more like a puzzling coaching decision, as Niskanen handles defensive 5v5 minutes well, but we can't ignore that he essentially doesn't play on the penalty kill. With a 1037 PDO, Niskanen will probably never have a season with nearly the same GF numbers and production, but we can't ignore his results from this season, so he slots in as the Norris Trophy runner-up.

A few readers will probably ask, "Mark Who?". Indeed, Mark Giordano isn't exactly considered an overwhelming favourite in the Norris race, and he's been relatively unknown for most of his career, playing on an underwhelming Calgary Flames squad. Yet, despite playing on a terrible team and missing around 20 games due to injury, he has put up an incredible season. Giordano's possession and goal numbers are astounding, especially when we consider which team he's on. With a 53.6% GF and 54.2% CF, Giordano can be considered a solid two-way player. However, what distinguishes him from the pack are his relative numbers, especially in the context of his usage: he has a +13.1% GF rel and a +10.2 CF rel, despite an O/DSt % of only 44.3%! Even as he is buried in the defensive zone, Giordano is the difference between the Flames playing like a bottom-tier team and a playoff team when he's on the ice. Furthermore, Giordano complements his stellar two-way play with serious production, as he has 12 goals and 43 points in 55 games, for a points/game pace of 0.78 PPG. Over an 82 game season, that's 64 points! On the Calgary Flames! Some would argue that Giordano has dropped out of the race because of the games he missed due to injury, but I don't think that's fair. He'll finish the season with over 60 games played, which I find is a more than adequate sample size to determine his performance over the season and compare him to the other candidates. In terms of deployment, there's certainly no issue, as he's on the ice for 36.7% of his team's even-strength time, 67.3% of its powerplay time, and 55.5% of its shorthanded time.

Giordano exemplifies the qualities teams look for in a number one defenseman. He's solid at both ends of the ice, he shoulders a heavy workload in all situations, he produces points at a good pace, and he helps his team score more goals than they allow when he's on the ice. The combination of tough deployment, superb possession and goal stats, and great production on a terrible team makes Giordano my clear choice for the 2014 Norris Trophy.