Being black in the NHL: From breaking the colour barrier to the Norris trophy

While this may seem like an odd topic for a white kid from Ontario to write about, it is a topic I feel needs to be explored. So let's take a look at the history of black players in pro hockey, and how things are now.

Share All sharing options for: Being black in the NHL: From breaking the colour barrier to the Norris trophy

I know, I'm a white kid from Ontario. What could I possibly know about facing racism, or being black in a predominantly white sport, and for that matter, society? Well, I don't play in the NHL, and I'm white, so nothing. What I do know is a thing or two about hockey, and that I have the empathy to perceive racism when it happens. Over the past few years, I've perceived a lot of it in the NHL, and I don't feel that enough people are talking about it.

The life and passing of Herb Carnegie

Admired by legends like Beliveau and Mahovlich, Herb Carnegie never got a chance in the NHL due to the colour of his skin.

The life and passing of Herb Carnegie

Why did I want to write this piece? I was raised to treat all people with respect, in a very liberal household. I have never felt the need to research the history of black people in hockey because my assumption was that they were always allowed to play, and they just didn't. I thought maybe it was a cultural thing. I thought wrong, and in a way I'm attempting to correct that.

I see a lot of what I feel is racism from the media nowadays, and social media is a platform on which many bigots will spew their hatred. This prompted me to do some research on the history of black players in hockey, so that I can talk about the present, knowing how things used to be. I also hope my research sheds light on a bit of history that may be unknown for some

As previously mentioned, I had always assumed that black players were welcome. False. For a long time, they did in fact have to play in their own leagues. The NHL never had a policy that they could not play, but there was a suspected prejudice. From what I gather, it was basically an unwritten rule, a custom of sorts, that the NHL and predeceased pro leagues did not accept these players. Why that was the case is a question I don't think is necessary. Canada is not a country of moral perfection, racism has always existed. Just because slavery was abolished in Canada by British decree long before it was in the U.S. doesn't mean there was never slavery here, or that there were/are no racist people.

The Coloured Hockey League was founded in 1895 featuring teams from across Canada's Maritimes. The league contributed a lot to the game according to some historians. It was apparently the first league to allow a goaltender to leave his feet to cover the puck. Hockey historian George Fosty actually alleges that the slap shot was invented by Eddie Martin of the Halifax Eureka in 1909, not by Boom Boom Bernie Geoffrion. It's the only account I've read, but I didn't even know this league existed until I decided to research. So it may be that a story I was told as a child may be a falsehood, brought about by racial segregation. 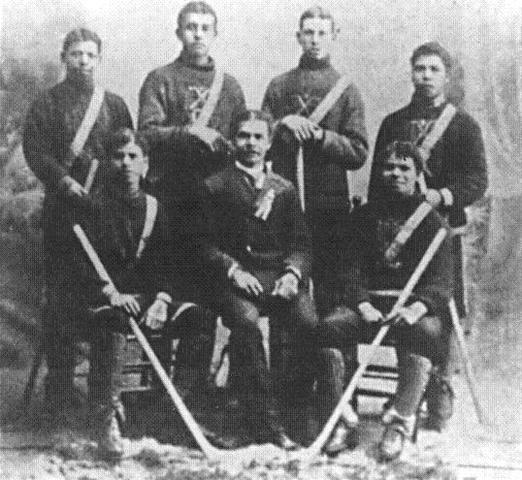 Provinces like Ontario were too geographically large in early years to establish an all-black league, but players did get to play in other leagues. Individual players did play with white players in other leagues, and my research has shown there was apparently not too much animosity. Leagues like the Central Ontario Hockey Association, and the Quebec Provincial League allowed black players to join their ranks. The first all-black hockey team in Ontario played in the integrated Niagara District Hockey league in the 1930's. So while a suspected bias kept the players out of the NHL, they were still able to play, and as such the sport became more popular and some real talent was growing.

One of these talents was Herb Carnegie, considered to be the first black hockey star. Carnegie won the MVP of the Quebec Provincial League three times in his career, and was one of the better players in the league throughout his days in Quebec. Conn Smythe allegedly said of him: "I'll give any man $10,000 who can make Herb Carnegie white." I can find no confirmation of this quote, but if it's true, it speaks to the aforementioned bias that prevented teams from enlisting black players. As people began to finally distance themselves from the bias in the late '40s, Carnegie finally got a shot at the show. In 1948, the Rangers offered Carnegie a tryout. He would turn down all three offers from the club during his tryout, as he was making more money in the Quebec league. Without context of the payscales at the time, it's tough to figure out if this was a lowball offer due to his race, but earning less in a pro league than in a local Quebec league casts at least some suspicion. 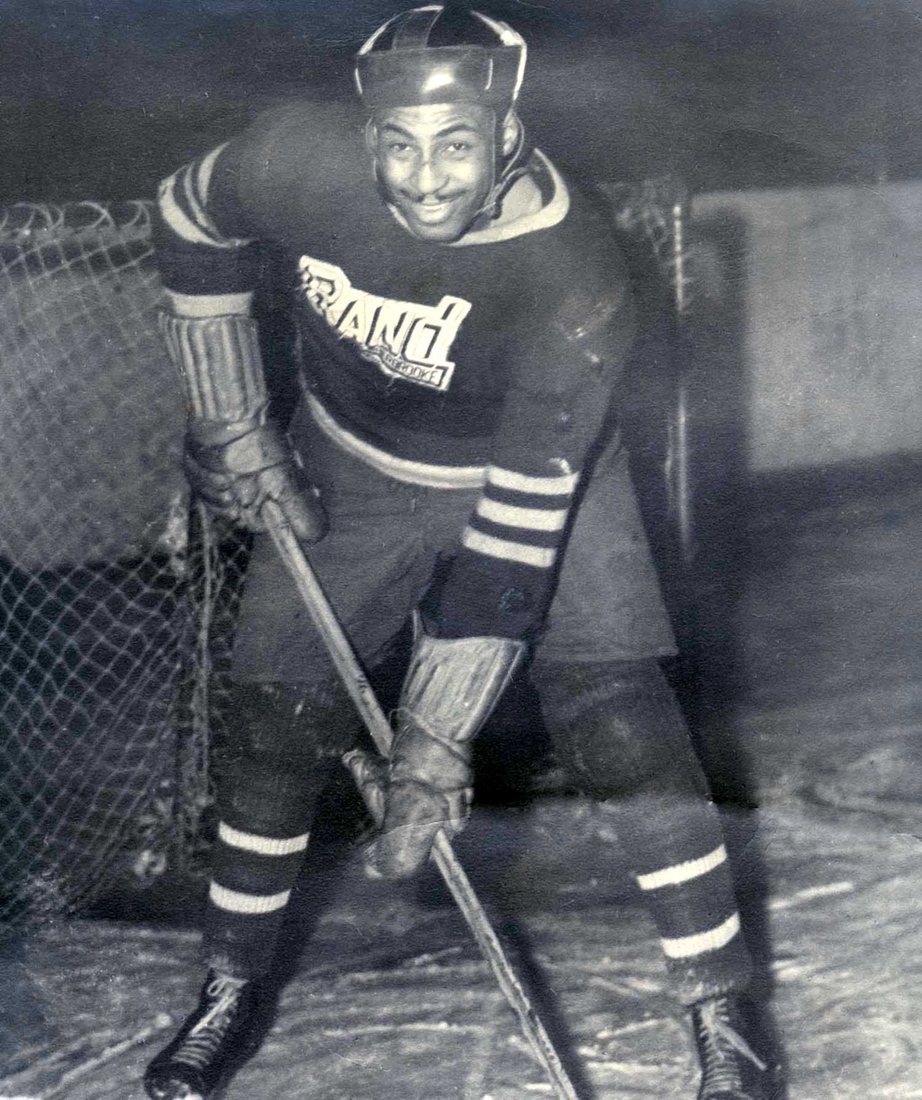 10 years after Carnegie got his tryout with New York, the colour barrier was finally broken. An injury-riddled Boston Bruins squad enlisted the services of Willie O'Ree, the first black man ever to lace up in the NHL. O'Ree made his debut on January 18, 1958 against none other than the Montreal Canadiens. O'Ree had a short NHL career, tallying four goals and 10 assists throughout parts of three seasons. Those would be pretty unimpressive totals if not for two things. For one, he faced a great deal of racism, particularly in the U.S. by his account. And second? He was 95% blind in his right eye from getting hit by a puck. He was determined to break a long standing barrier, and concealed a pretty serious condition in order to do it. For a long time his race was just not welcome, and he proved that it deserved to be by doing the most hockey player thing ever. 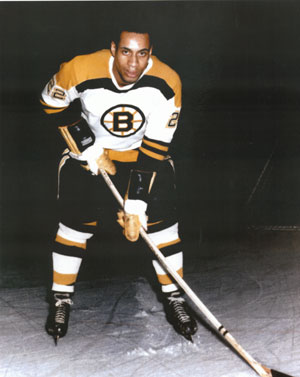 Naturally, he is known as the Jackie Robinson of hockey. When you consider that O'Ree broke the barrier in hockey a whole 11 years after Robinson did it in baseball, it shows what a feat that was at the time. But breaking such a barrier does not end prejudice. O'Ree has noted that he heard very racist statements wherever he went. He acknowledged that they were worse in the U.S. than in Canada, but that Canadians were not exactly saints. Imagine being a half blind hockey player, in the world's best league, being told you should go pick cotton instead. I used to be a ref, and now I feel like an idiot for thinking people yelled bad things at me when I was on the ice. Today, O'Ree still works with the NHL and is involved with their diversity program, helping to pave the way for young players to follow in his footsteps.

But, it seems a barrier broken does not lead to a flood. It wasn't until 1974 that the Washington Capitals drafted Mike Marson in the second round, making him the second black player to make the show. Bill Riley also made the team, becoming number three. He and Mike Marson became the first pair of black players to play together in the NHL. After the '70s, we began to see more black people rising into the NHL, and when you look at today, you can see exactly how much the league has progressed, with superstar players that don't have white faces. I bet a lot of the guys from the early years wouldn't believe it until they saw it.

P.K. Subban, Evander Kane, Wayne Simmonds, Jarome Iginla, Kyle Okposo, Joel Ward, Johnny Oduya... Black players are not only prevalent, but you have some elite players, including a Norris Trophy winner, and Iginla's laundry list of awards, including an Art Ross Trophy, a King Clancy Memorial Trophy, a Mark Messier NHL Leadership Award, a Lester B. Pearson Trophy (now the Ted Lindsay Trophy), and two Maurice "Rocket" Richard Trophies. But, while we now have a much more diverse NHL, I don't think there's any way you could say that racism has left the game entirely. In recent years, we've seen a banana thrown at Wayne Simmonds during an exhibition game, in London, Ontario of all places. How about the explosion of racist tweets after Joel Ward scored the series winning goal to eliminate Boston a couple of years ago? Heck, two professionals of Indian descent hosted TSN one morning and with the Twitter explosion that followed, you'd think they assassinated Wayne Gretzky. Racism is alive and well and we'd be wise to recognize that.

It's rarely as blatant as a racial slur, or a banana thrown on the ice. More often than not, I see what I feel is subtle racism. Evander Kane's "money Mayweather" picture is not something that I found particularly smart or a good idea, but I think the criticism was a little more than necessary. We don't have a white player doing that to compare the reaction with, but I felt it went beyond the pale in terms of coverage. Do I have any proof this is racist, no. I'm just putting this out there for discussion.

How about P.K. Subban? He clutches his logo after scoring against Ottawa, and he's called out by the other team and the media. James Van Riemsdyk does the same thing a few games later against Montreal, not a peep. Neither celebration is bad, but only one of them gets called out for it. I'm not trying to make it look as if people are burning crosses, but does anyone think there is not some subtle racism here? It's okay for him to be there, even to be good, but to be good and know it? That's too much for many.

We hear, "Subban is a defensive liability". But he's not, he's the best defensive player on his team, and one of the best in the league. We hear, "Subban's bad in the room", but he's great, and there is a TV show that chronicles it. I feel that the lens used by the media when looking at Subban, and other black players in the league, is different than that used for the white players. And they take it in stride, as I've personally never heard one of them play the race card outside of Evander Kane doing so one time, and I don't think he was wrong.

Society has progressed. Other than some idiots on social media, you don't hear the blatant racist comments that you would have way back in the day, because society won't tolerate that. But, from what I see, we will tolerate holding black players to a different standard than white players, and I call it what it is: racism, even if it's subtle. In the past, they couldn't play with white people. Not that it was a rule, it was just a "suspected prejudice". Now, they can play, but someone might throw a banana at them, racism will fly on Twitter, and the media will scrutinize the players in a way that, at least feels like, it is rooted in racism.

I'm not trying to call anyone a racist. Obviously from some of my commentary, most of you will have a few names in mind. I look at how far we've come in accepting other cultures, and other races into our game, and it's good, but far from perfect. If you talked to Willie O'Ree, I bet he could tell you much better than I how 56 years has brought much improvement, but I'd wager to guess that he might agree with me on my views today.